Throughout 2014, CBS This Morning has veered between stories happily hyping the benefits of marijuana and reports on its danger. While the segments seesaw back and forth, the network doesn't seem to be able to put together balance individual reports. On Monday, this continued as journalist Adriana Diaz focused on a Minnesota mom who gave her son a form of medical marijuana to help with his traumatic brain injury.

Speaking of Angela Brown, Diaz explained, "Desperate, she began researching the benefits of medical marijuana. The family drove to Colorado and obtained this bottle of cannabis oil, legal there but not in  Minnesota." Diaz added, "Did you think it was a miracle?" [MP3 audio here.] Brown hailed it as a "miracle in a bottle." At no point, did the reporter discuss what's in cannabis oil or whether this could be a placebo effect.

Co-host Gayle King editorialized at the end of the segment, "I'm so glad you did this story. I hope people look at this and say, 'come on.' At some point common sense has to prevail." One certainly sympathizes with Mrs. Brown and her son, who was hit in a line drive by a baseball, but the show's hosts could have at least briefly scrutinized the supposed miracle cure. According to the American Cancer Society:

There are no studies in people of the effects of marijuana oil or hemp oil.

In April, CBS This Morning promoted legalized in pot in Colorado and touted the state's best: "ghost train haze."

In January, the program touted "cannabis capitalism" and "pot tours."

In April, the network woke up to the danger of "edible pot" and deaths in Colorado.

A transcript of the October 27 segment is below: 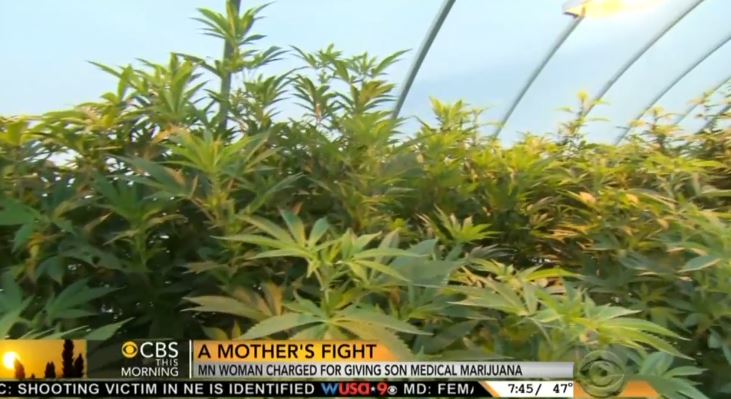 GAYLE KING: A mother from the small city of Madison, Minnesota, faces possible prison time this morning for giving her teenaged son medical marijuana. He has a traumatic brain injury. Angela Brown says she turned to the treatment as a last result, unable to watch her son suffer, rather, any longer. Adriana Diaz sat down with the family that could be split up by the law. Adrianna, Good morning.

ADRIANA DIAZ: Good morning. Angela Brown traveled to Colorado to get a bottle of can bus oil in the hopes of getting some comfort for her son, but what she calls a mother's instinct may land her behind bars.

ANGELA BROWN: I broke the law but I did it to save my son.

DIAZ: For years, Angela Brown searched for a way to end her son's chronic pain. Fifteen-year-old Trey Brown looks healthy, but pressure inside his head causes this. [Video of Brown struggling to breathe.] Pain stemming from a baseball accident in 2011. Where were you standing when you got hit?

TREY BROWN: Right over there.

DIAZ: A line drive to Trey's head caused bleeding in his head the size of a golf ball. Doctors feared he wouldn't survive. But when he finally woke up from a medically induced coma, his mother says the old Trey was gone. Who is he now?

ANGELA BROWN: He's just a shell of himself. But he's in so much pain and that causes depression.

DIAZ: With depression came daily migraines, muscle spasms, and uncontrollable outbursts like this one.

TREY BROWN: Like, I cry, like, every day before I go to bed. I'll end up crying.

TREY BROWN: Like my brain is about to blow up.

DIAZ: Hoping to ease his pain, tray's parents tried 18 different medications but little helped. Angela believes some of the drug's side effects made Trey suicidal.

DIAZ: What is going through your mind when you're hearing your child say these words to you?

DIAZ: Desperate, she began researching the benefits of medical marijuana. The family drove to Colorado and obtained this bottle of cannabis oil, legal there but not in  Minnesota. Angela says after a few drops Trey's pain melted away. Did you think it was a miracle?

ANGELA BROWN: Yeah. Oh, god. Yeah. It's a miracle in a bottle.

TREY BROWN: It stopped the pain and it stopped the muscle spasms. It was helping me go to school until it then got taken away and then school was really hard again.

ANGELA BROWN: Taken away when Trey's teachers asked why he was doing better in school. I said, "well, I gave him an oil that we had gotten from Colorado dried from the marijuana plant" and then you could feel the tension in the room.

DIAZ: A week later, the sheriff's department confiscated the oil and county prosecutors charged Angela with child endangerment and requiring child protection. If convicted, she could face up to two years in prison and up to $6,000 in fines.

ANGELA BROWN: I was trying to prevent him from being hurt.

DIAZ: But you did get an illegal substance and give it to him.

ANGELA BROWN: Yes, illegal substance in Minnesota. Not illegal in other states.

DIAZ CBS News reached out to the prosecutor, law enforcement and Trey's school district. All declined our requests for an interview, citing the ongoing case. If Angela does go to jail, she fears most for her children.

ANGELA BROWN: Who would take care of my kids? My boys are mama's boys.

DIAZ: They need you?

DIAZ: In May, Minnesota did become the 22nd state to approve medical marijuana but the law doesn't go into effect until next year and the Brown family says they simply can't wait.

KING: I'm so glad you did this story. I hope people look at this and say, "come on." At some point common sense has to prevail. They're clearly not abusing the system and it's helping their son.

DIAZ: They say they want to move to Colorado once this is all resolved. But whether or not the mother will join the family has yet to be seen.