Rosie O'Donnell, a 9/11 truther and general conspiracy theorist, on Wednesday delved into the reasons behind Barack Obama's air strikes against Syria. The View co-host insisted that there is a "financial agenda" in the United States's actions, lecturing her co-hosts: "I can't get out of my head the fact that Syria has a lot of oil. A lot of oil. Not a lot of oil in Rwanda or the Congo. Atrocities there all the time."  [See MP3 audio here.]

An awkward silence followed as Whoopi Goldberg frowned at the comments and responded, "On Americans? I think one of the things that tends to happen is as soon as some stuff starts going down with Americans, we say, you know, no more." She chided O'Donnell: "I don't think anybody goes to war gleefully." O'Donnell retorted, "I don't think it's gleefully, but I do think there's a financial agenda attached to it."

The comedienne, who doesn't believe the "official story" that Muslim terrorists were responsible for the September 11th, 2001 terrorist attacks, didn't explain just who is benefitting from going after the group that has beheaded two Americans.

Past examples of O'Donnell's conspiracy beliefs: 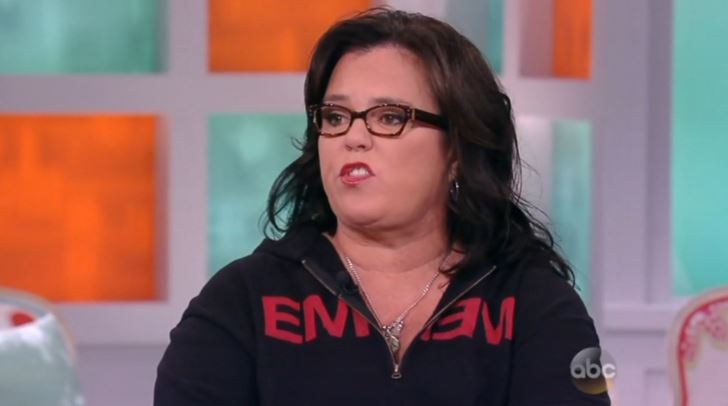 "I do believe it is the first time in history that fire has ever melted steel. I do believe that it defies physics for the World Trade Center Tower Seven, building seven, which collapsed in on itself, it is impossible for a building to fall the way it fell without explosives being involved, World Trade Center Seven. World Trade Center one and Two got hit by planes. Seven, miraculously, for the first time in history, steel was melted by fire. It is physically impossible....[Asked who was responsible for 9/11, she responded] I have no idea."
— Co-host Rosie O'Donnell on the March 29, 2007 edition of ABC's The View.

JOY BEHAR: Well, the one thing is that Giuliani post-9/11 appeared to be very heroic. But now they're saying that he was not that efficient in helping the people who were the recovery, the responders.
ROSIE O'DONNELL: Also, he was, you know, instrumental in making sure that all of the steel was removed and shipped to Canada right away, Giuliani, was shipped to China, sorry, right away."
BEHAR: "For what purpose?"
O'DONNELL: "Well, to get it out of there and to have, you know, all of the stu -- but it was all gone. So there was no like metal to test. There was no, there was no-"
ELISABETH HASSELBECK: "Giuliani was involved in the cover-up is that what's going on? I just want to check."
— Discussion of 9/11 the May 14, 2007 edition of ABC's The View.

On Wednesday, O'Donnell condemned the fight against ISIS:

ROSIE O'DONNELL: We just bombed another country and even though it doesn't say so on the news we went to war yesterday in America against another country in the Mideast. And to me, no matter what, that's wrong. You don't fight violence with violence.

That comment sounds remarkably similar to this one from 2007:

ROSIE O'DONNELL: "Well, you have two choices in life, Elisabeth. Faith or fear. Faith or fear, that's your choice. You can walk through life believing in the goodness of the world or walk through life afraid of anyone who thinks different than you and trying to convert them to your way of thinking. And I think that this country-"
ELISABETH HASSELBECK: "Well, I'm a person of faith, so I, but I also believe-"
O'DONNELL: "Well, then, get away from the fear. Don't fear the terrorists. They're mothers and fathers."
— Exchange on the May 14, 2007 edition of The View.

A transcript of the September 24th View segment is below: 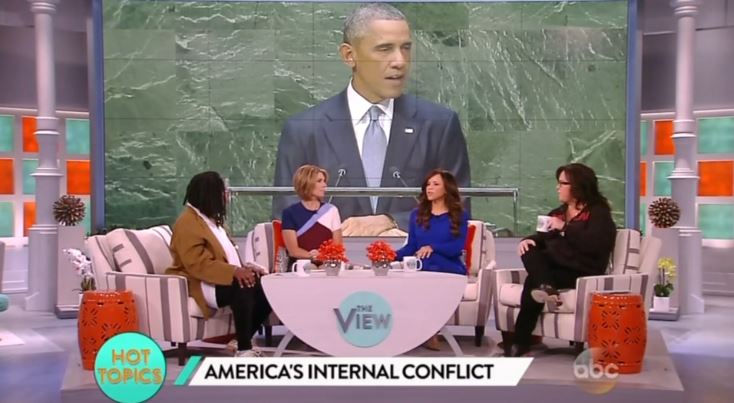 WHOOPI GOLDBERG: Just before we went on the air, President Obama addressed the United Nations about American air strikes against ISIS and Syria. So, the U.S. Is at war again. I mean, I know he's been trying to avoid it. But, you know, I guess now that we have some of the countries behind us and we're going after ISIS does this make it any easier?

ROSIE PEREZ: I'll tell you this much. I know what all the pundits are saying. I know all the facts and everything like that. What I don't know is exactly how I'm feeling about it. I'm terrified. I don't know if it's a great decision to go in, if it's not a great decision to go in. Should we have done it before? That doesn't matter. We're here today and it's very scary. As a New Yorker experiencing 9/11, the possible threat of someone coming up to me or another citizen of the United States and potentially going for their throat is terrifying. So, what do we do about it? And right now, it's just like, it's scary to me and that's how I feel. You know?

ROSIE O'DONNELL: Yeah, it is. It is definitely scary. You know, it's scary to me to think when I had my last baby 12 years ago we were just getting into war and she was one and now I have another one-year-old and we just bombed another country and even though it doesn't say so on the news we went to war yesterday in America against another country in the Mideast. And to me, no matter what, that's wrong. You don't fight violence with violence.

NICOLLE WALLACE: I don't know if we can put it up again, but what struck me, what I felt when I saw President Obama is it's such a brutal job. He looks like he's aging by the second.

PEREZ: Yes, he does.

WALLACE: He's young. This job ages you so much. So what I feel is we now have had two presidents in a row who agree on nothing. Yet both of them think the threat to our country is so dire that they have done the exact same thing 12 years apart. So, I feel like job who would want this job. I don't think any president -- I think they spend the rest of their lives, you know, with this knowledge that they have taken a country to war. And in this country, we don't all go to war, right? The military families go to war.

WALLACE: Those moms and dads of soldiers, men and women. The wives, the kids go years without seeing their family. You know, the deployments are endless.

PEREZ: You know, my father and uncle served in World War II and the Korean War.

WALLACE: Did they talk about it?

PEREZ: They would not talk about it. It was so traumatizing to them and they loved America.

O'DONNELL: And I always think, I can't get out of my head the fact that Syria has a lot of oil. A lot of oil. Not a lot of oil in Rwanda or the Congo. Atrocities there all the time. I don't know why.

O'DONNELL: I don't think it's gleefully, but I do think there's a financial agenda attached to it.

GOLDBERG: There may be. I don't know if this particular thing is what –

GOLDBERG: I don't know if that's what this is. I know that's ISIS is pissing him off and he's sick of it. And not just for us. I think if we get out and we're gone, the Middle East doesn't want to deal with them either and they're saying we'll help you. Something is going on.

WALLACE: Which is why – Right. And this is historic. I mean, there are five Arab nations standing by our side as part of this coalition, fighting this war with us. And there is no comfort at a time of war. It's terrifying, but that's a very good development.