All three network morning shows on Thursday highlighted Barack Obama's primetime speech from the night before, promoting his talk of a "broad coalition." Yet, Germany and Britain have announced that they won't take part in the President's planned air strikes. In 2003, ABC, NBC and CBS hit George W. Bush for "going it alone" with a coalition of 18 countries.

On CBS This Morning, Bill Plante hyped, "[Obama] insisted that the U.S. will not go it alone." He then played a clip of the President trumpeting, "America will lead a broad coalition to roll back this terrorist threat. Already allies are flying planes with us over Iraq..." On NBC's Today, Peter Alexander relayed, "After weeks of criticism that he did not have a clear strategy, President Obama announced that he would lead a broad coalition to destroy ISIS."  [MP3 audio here.]

On ABC's Good Morning America, Jon Karl described, "The President used his prime time address to tell the American public he does have a plan for taking on what many in his administration call the greatest terrorist threat since 9/11." 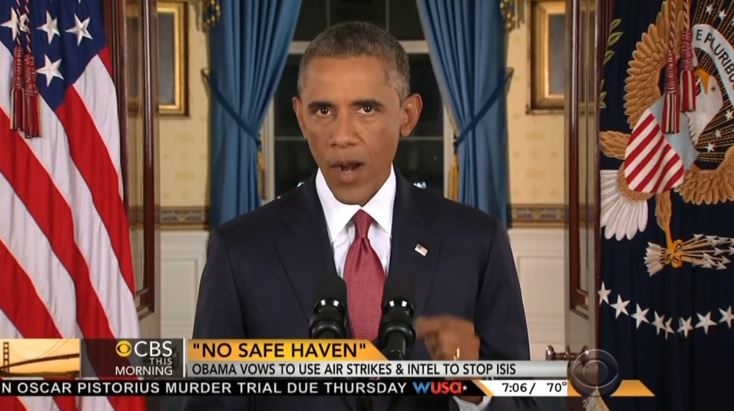 He then included the same clip of Obama talking about a "broad coalition to roll back this terrorist threat."

The foreign ministers of Germany and Britain said on Thursday they would not be taking part in air strikes in Syria against the Islamic State militant group.

German Foreign Minister Frank-Walter Steinmeier told a news conference in Berlin that Germany has not been asked to take part in the air strikes and would not be participating. "To quite clear, we have not been asked to do so and neither will we do so," Steinmeier said.

BERLIN (AP) — Britain won't participate in any airstrikes on Syria but otherwise is ruling nothing out as it considers how to support President Barack Obama's plan to root out the Islamic State group, the British foreign secretary said Thursday.

This past Monday, Meet the Press moderator Chuck Todd made sure to note how the President wants "to make this coalition against ISIS...look like the coalition that George H.W. Bush, back in 1990 and '91...put together to go after Saddam Hussein." 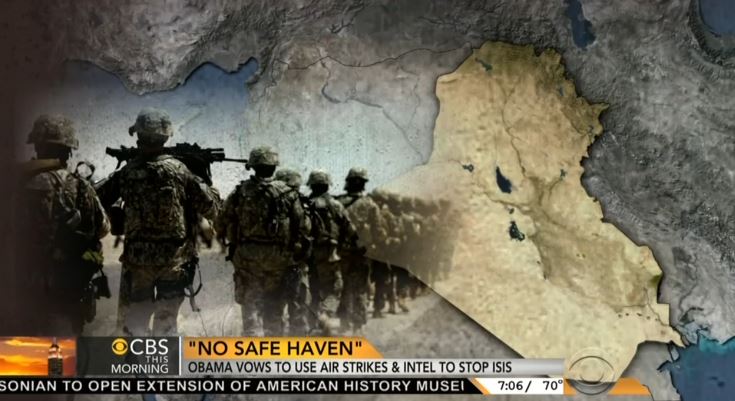 Only nine nations are part of current coalition against ISIS. President George W. Bush had 18 countries for his use of force against Iraq. Back then, NBC spun this as "going it alone."

In the 2003 run-up to the Iraq war, journalist Eleanor Clift derided George W. Bush's coalition as the "bullied and the bribed."

A transcript of the September 11, 2014 CBS This Morning segment is below:

NORAH O’DONNELL: President Obama promises his administration will defeat any ISIS threat to the United States. In an address to the nation last night he said American warplanes will expand a bombing campaign into Syria for the first time. Bill Plante is at the White House. Bill good morning.

BILL PLANTE: Good morning. The president wanted to demonstrate to the nation that he has a plan to destroy the terrorist group in Syria as well as in Iraq. Senior officials tell us that air strikes against ISIS positions in Syria will begin as soon as intelligence identifies targets.

BARACK OBAMA: I will not hesitate to take action against ISIL in Syria as well as Iraq. This is a core principle of my presidency. If you threaten America, you will find no safe haven.

PLANTE: The president said his battle plan includes the expansion of air strikes, an increase in support for partner forces on the ground, counterterrorism efforts to prevent attacks by ISIS on the U.S. and its allies and humanitarian support for victims of ISIS attacks. But he insisted that the U.S. will not go it alone.

OBAMA: America will lead a broad coalition to roll back this terrorist threat. Already allies are flying planes with us over Iraq, sending arms and assistance to Iraqi security forces and the Syrian opposition. Sharing intelligence and providing billions of dollars in humanitarian aid.

PLANTE: As part of that effort, an additional 475 U.S. service members will be deployed to Iraq to advice, conduct intelligence and coordinate U.S. efforts, bringing the total number of U.S. troops there to more than 1,600. The president again promised that no U.S. combat troops will be involved on the ground. Air strikes will support Iraqi forces and the newly formed Iraqi government.

OBAMA: We cannot do for Iraqis what they must do for themselves nor can we take the place of Arab partners in securing their region.

PLANTE: The president called on Congress to authorize training and funding to support moderate Syrian forces.

KELLY AYOTTE: I think that this should have been done obviously much more aggressively from the beginning.

PLANTE: New Hampshire Republican Senator Kelly Ayotte was among several Republicans skeptical that the president would deliver on his promises.

AYOTTE: Because often he’s given speeches, but following up on the actions that need to be taken against this dangerous group I think is what is going to measure what he said today in the following days.

PLANTE: The administration officials say that the president does not need any additional authorization to take the fight to ISIS, that it can rely on existing law, but he does need Congress to vote on funds to train Syrian forces. The speech was his answer to the critics who say that he hasn’t acted soon enough or firmly enough. Charlie?