MSNBC may be gearing up for another election season of  the "war on women." The Hardball host on Friday speculated whether the Republican senatorial candidate from North Carolina engaged in sexism by aggressively attacking his Democratic opponent. Before showing clips of Thom Tillis sparring with Senator Kay Hagan, Matthews sneered, "But sometimes, the more we watch, the more we avert our eyes." [MP3 audio here.]

The cable anchor lectured, "...Talking down to your female opponent may not be the best strategy." Matthews connected the debate to George H.W. Bush's 1984 vice presidential debate with Geraldine Ferraro. (And...who won in 1984?) 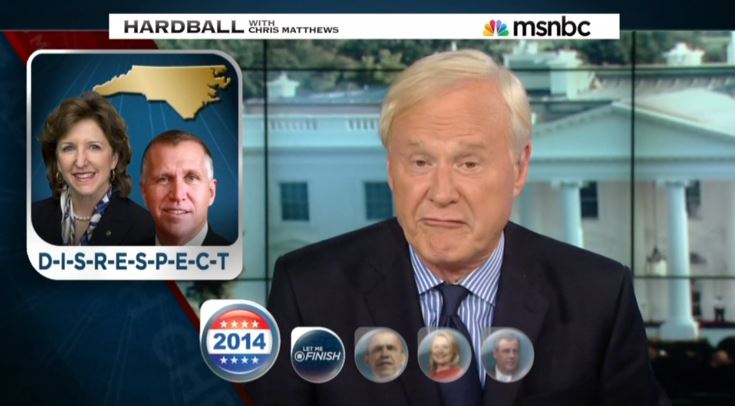 MATTHEWS: What's the reaction, if you were running the ad, you're working for Senator Hagan, would you run that guy's, Thom Tillis', Speaker Tillis' performance in your ads? Would you run ads and say, this is no way to treat a person who's a senator? When it's that behavior you're using against him?

Matthews's attacks built off a MSNBC.com article trying to cement the debate of notion of sexism. It featured Ferrarro's daughter, Donna Zaccaro, to complain that Tillis's performance was "sadly very reminiscent of the sexist attacks used against my mother when she ran for Vice President 30 years ago."

While the exchange between Ferraro and Bush has become an iconic moment in American politics, Zaccaro says 30 years later, male candidates haven’t learned how to campaign against female rivals – remaining respectful while disagreeing.

“Hopefully the voters won’t stand for this sort of treatment of a female candidate that many of us thought the entire country had moved beyond decades ago,” Zaccaro said.

A partial transcript of the September 5 segment is below:

CHRIS MATTHEWS: Now that we are past Labor Day in the beginning of the campaign, we are getting to know the men and women seeking political office this year. But sometimes, the more we watch, the more we avert our eyes. Just watch North Carolina Republican Thom Tillis debating Democratic U.S. Senator Kay Hagan this Wednesday night. And watch Hagan's response to him.

THOM TILLIS: [montage] That's reality and that's math. That's something that Kay needs to accept. Kay's answer leads me to believe she hasn't been in North Carolina lately. Kay's math just doesn't add up. Here's something you should know a lot about being a senior appropriations chair, Kay. You know, Kay, if you actually read the budget. I just think again that Senator Hagan really needs to understand and maybe spend more time back in the state.

SENATOR KAY HAGAN:  I'm actually insulted by his comments. I was a vice president at a bank. I wrote billion dollar state budgets in the state of North Carolina. I understand math. Even when I was a teenager I worked at my dad's tire store and did layaway for people buying tires. I understand math.

MATTHEWS: Anyway, as one North Carolina reporter wrote, "Thom Tillis stopped just short of calling Kay Hagan little lady." Anyway, talking down to your female opponent may not be the best strategy.

HUNT: I will say, on the Senator Hagan and Thom Tillis -- I mean, he couldn't address her that way on the Senate floor if he were to actually get here. I mean, Senator Reid got in trouble for that for addressing any senator, male or female, by their first name. It's disrespectful.

MATTHEWS: Use some psychobabble if we have to, because we all use it here. Was he using that to put her down, to show that he was so familiar and unimpressed with her personage that he would dismiss her, somebody at a cocktail party. Kay, come over here, you got to hear this joke? What kind of strange -- I think it's odd. I call every senator "senator" unless they tell me not to.

And then I -- the only guy who ever told me not to is Pat Moynihan. The rest of them said, call me Pat. They're always -- I think you give the person their title. After all, he's going for that title.

CAPEHART: In part of the clip you showed, he addressed her at Senator Hagan. He did do that throughout the debate, sparingly, but the thing -- the reference that he made, the very first reference to the senator in his opening remarks was, Kay Hay. That, to me, struck me, whoa, that's unbelievably --

MATTHEWS: Is that her nickname with friends?

CAPEHART: No, I think he maybe just made it up.
But, to me, it struck me as disrespectful. And probably just set the tone. He just came off as rather highfalutin, smug, and probably trying to prove that, oh, I'm not impressed by you, I'm the speaker, you're just a senator who's lost touch with the constituents.

MATTHEWS: Well, first of all, he took a shot once or twice, but he kept taking the shot, it's only a 45-minute plane ride, I'm sure Kay Hagan has been down there an awful lot the last six years, right? The idea she's never been to North Carolina like it's billions of miles away is ludicrous.

MATTHEWS: What are the rules? Ms. Hunt?

HUNT: They're always evolving, right? But I think in the larger picture here, and you'll hear both Democrats and Republicans talk about this, this is the kind of thing that discourages women from running for office in first place.

HUNT: And one of the things they talk about as far as one of the main reasons why there aren't as many women members of Congress as there might otherwise be is because they don't step up in the first place. They have trouble recruiting women to run.

MATTHEWS: I agree with that. There's not as many women candidates.

HUNT: Right and you see these kinds of situations where, you know, they're having to stand there and respond to someone who is sort of trying to knock them down a peg. I mean, why would that be --

MATTHEWS: What's the reaction, if you were running the ad, you're working for Senator Hagan, would you run that guy's, Thom Tillis', Speaker Tillis' performance in your ads? Would you run ads and say, this is no way to treat a person who's a senator? When it's that behavior you're using against him?

CAPEHART: I don't -- I don't think so. I mean, it's not like George Herbert Walker Bush's treatment of Geraldine Ferraro.

MATTHEWS: He said afterwards, I kicked her ass or something. It's unbelievable.

CAPEHART: He did say that. He had to apologize after that. So, if I were Kay Hagan, I wouldn't use that in an ad. To answer your question, how should a male candidate treat a female opponent? Look to Vice President Joe Biden and his debate with Sarah Palin. That's how you do it. Treat your opponent with respect.