Miley Cyrus tends to shock most people -- even the most progressive among us take note of her antics. From photographing herself topless under the covers, to which The Huffington Post responded “keep doing your thang, girl,” to her recent promotion of the “free the nipple” campaign, she has continued to garner media attention. 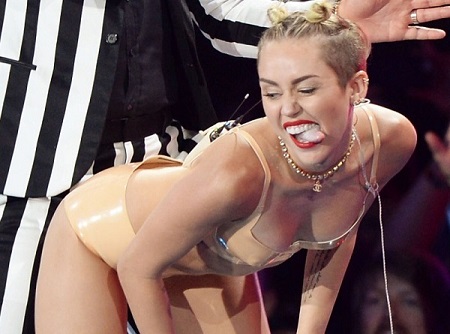 But her shock factor amplified on June 9, when Paper’s interview with the pop star was released. Besides the bizarre fully nude photos accompanying the article, Cyrus had some important views to communicate.

According to Salon’s Jenny Kutner, “Cyrus tackle[d] progressive issues with admirable seriousness,” proclaiming a “litany of totally right-on assessments of the world.” Kutner was considerate enough to warn us that there were “several f-bombs tossed in” with the deep thoughts.

The Salon writer’s 5 favorite segments of the interview included Cyrus’ referral to the fundamental Christian viewpoint as a “fairy tale” we’ve “outgrown,” comparing it to “f***ing Santa and the tooth fairy.” The pop singer also stated that legislators who ascribe to it “[shouldn’t] get to make our laws … That’s “f***ing insane.”

According to Kutner, Cyrus’ views on sexuality and gender identity were equally spot-on. Besides revealing that she is bisexual, she stated: “I am literally open to every single thing that is consenting and doesn’t involve an animal and everyone is of age.” Notice, she doesn’t specify the number of people acceptable – eek!

In the end, Cyrus embodies the classic liberal view on life: “As long as you’re not hurting anyone, your choices are your choices.” And when you're a wealthy celebrity, you consequences aren't really your consequences, and the violence you do to traditional society isn't your concern.