Today’s installment of the Media Research Center’s “Best Notable Quotables of 2014,” as selected by our 40 expert judges, the “The Barbra Streisand Political IQ Award for Celebrity Vapidity.” 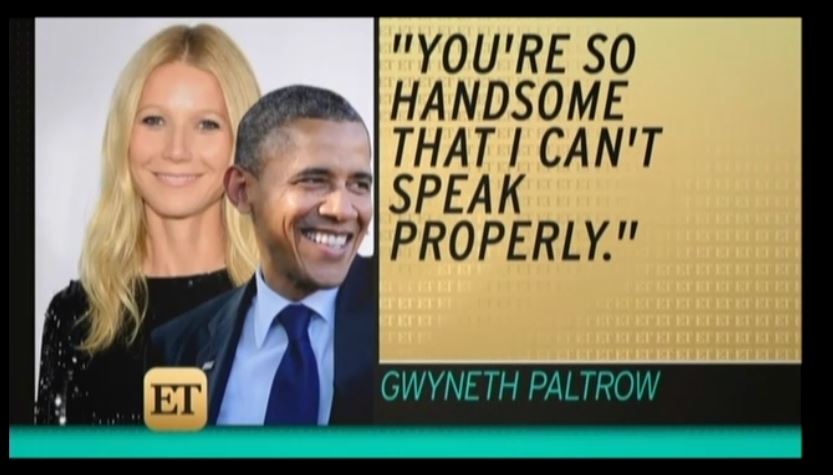 Winning this award: Actress Gwyneth Paltrow, who was widely quoted in news reports for her fawning treatment of President Obama at an October 9 DNC fundraiser held at her Los Angeles home:

“I am one of your biggest fans, if not the biggest, and have been since the inception of your campaign....It would be wonderful if we were able to give this man all of the power that he needs to pass the things that he needs to pass...You’re so handsome that I can’t speak properly.”

“This [the rise of the Tea Party] has happened before in history. In Germany in the ’20s and ’30s, there was this right-wing reactionary element that was so terrified of anarchy and communism, that they said, ‘You know what? There’s a group of street thugs that are real ideologues, and they’re willing to take it and they’re willing to bloody themselves. And you know, once they get into power we can control them.’ And that was why they backed them. ‘We can control this.’ And what they didn’t realize...What is true is that ideologues are only loyal to ideology.”

Rounding out this category, actress Emmy Rossum, star of Showtime’s Shameless. During an appearance on ABC’s Jimmy Kimmel Live on January 8, Rossum enthused about the “amazing” and “incredible” and “free” health care she received after becoming ill during a visit to Britain:

“I got food poisoning the next day....The hospitals are amazing there. I went to the hospital: Free health care! Incredible....They don’t even ask you for your I.D. You give your name, you give your symptoms, they hook you up to a bunch of fluids. They say, ‘Just leave when you feel like it.’ You pay nothing! I paid nothing. They treated me for hours, I paid nothing. Amazing...It was amazing.”

Tomorrow, we end 2014 with a look back at this year’s Quote of the Year (it’s awful). As always, you can check out all of the awards at www.MRC.org.