Now online: the December 1 edition of Notable Quotables, MRC’s bi-weekly compilation of the latest outrageous quotes in the liberal media. This week, after the grand jury in Ferguson, Missouri, chooses not to indict police officer Darren Wilson, NBC's Brian Williams dubs them "a failure," while as rioters burn buildings in Ferguson, Time magazine posts an essay: "In Defense of Rioting."

Meanwhile, NBC's Chuck Todd confides how he finds conversations with President Obama "very nourishing," and after just six weeks of motherhood, Katie Couric is ready to crown Chelsea Clinton "Mom of the Year" for 2014. Highlights are posted after the jump; the entire issue is posted online, with 20 quotes (four with video) at www.MRC.org. 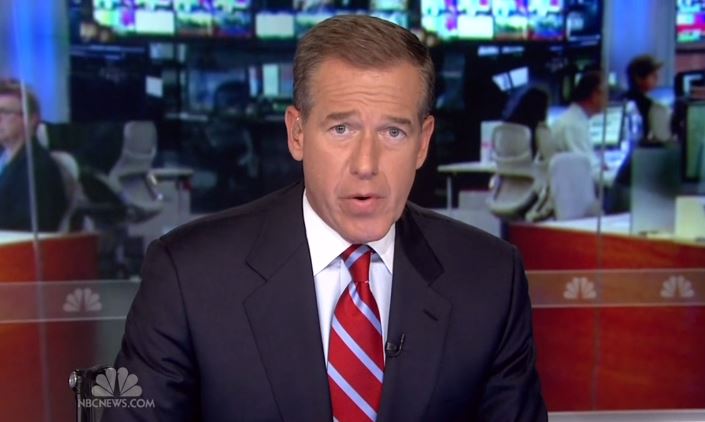 Anchor Scott Pelley: “In his address [about Ferguson] last night, President Obama said America has made enormous progress on race relations over the past several decades. Many would say the best evidence of that is the President himself....”
Correspondent Major Garrett: “America’s first black President has willingly shouldered the burden of a nation fractured along racial lines. An example of genuine racial progress himself, Mr. Obama carries the unrealistic expectations of healing that divide: A President with a singular perspective is tested once more.”
— CBS Evening News, November 25.

As Ferguson Burns, Time Asks: “Is Rioting So Wrong?”

“When a police officer shoots a young, unarmed black man in the streets, then does not face indictment, anger in the community is inevitable. It’s what we do with that anger that counts. In such a case, is rioting so wrong?”
— Writer Darlena Cunha in a November 25 Time.com piece, “In Defense of Rioting.”

Clip of President Obama in 2013: “Young people who have basically grown up here are Americans that we should welcome. We’re not going to have them operate under a cloud, under a shadow. But if we start broadening that, then essentially I would be ignoring the law in a way that I think would be very difficult to defend legally. So that’s not an option....”
Bloomberg’s Al Hunt: “I don’t agree with his analysis back then. I think he’s on pretty solid legal ground [now]....This isn’t a power grab. He’s doing what all of his predecessors did.”
— MSNBC’s Morning Joe, November 20.

Anchor Anderson Cooper: “He said he couldn’t do it in the past. He’s now saying he can do it, and should do it and will do it. What’s the White House spin on this?”
Congressional correspondent Dana Bash: “Well, first of all, we should also remind people that he’s not just the President, he also is a constitutional — he was a constitutional professor and a lawyer, so he speaks from — with academic knowledge.”
— CNN’s AC360, November 19.

“Part of the reason this controversy has become such a focal point is that there isn’t a lot of other bad news about ObamaCare....So I think a lot of critics are seizing on this because it’s a sort of life raft for them to maybe say, ‘Maybe we can stir up outrage anew at the way this was originally done and get some more momentum for repeal,’ which at this point does not look like much of a possibility.”
— The Atlantic political writer Molly Ball on MSNBC’s Andrea Mitchell Reports, November 17.

“It [ObamaCare] is a legislative success story about as likely as landing a tiny rover on moving comet, hurtling through space hundreds of millions of miles away from Earth....Now, armed with some tapes of an M.I.T. professor saying some stupid things and potentially sympathetic Supreme Court Justices, conservatives are looking to destroy all of it. To blow it all up, to grind it into dust and raze the Affordable Care Act to the ground, based on no principle other than their implacable ideological opposition to the project of providing health insurance partially through the government.”
— Host Chris Hayes on MSNBC’s All In, November 17.

Host Larry King: “Do you like him [President Obama]?”
NBC Meet the Press moderator Chuck Todd: “Oh, he’s a very likable guy. Yes.”
King: “I agree.”
Todd: “He’s very friendly. I mean, he’s very easy to talk to. You sit there and have these off-the-record sessions with him — you’ve had them — and they’re just very nourishing conversations.”
— Exchange shown on the November 20 edition of Ora TV’s Politicking with Larry King.

Gushing Over Chelsea Clinton, “Mom of the Year”

“When you think about some of the women who’ve been honored in years past, Chelsea — you have [teenage Pakistani human rights activist] Malala, you have Melinda Gates, and of course your mom, Hillary Clinton — I mean, it must be so flattering to be added to that list....A woman of the year, and I think it’s safe to say, probably a ‘Mom of the Year.’”
— Katie Couric during a November 12 Yahoo! News interview with Chelsea Clinton, who only became a mother on September 26, after the latter was named Glamour’s “Woman of the Year.”