It's heresy I tell you. Heresy! A generally liberal newspaper must never be allowed the thought crime of endorsing a conservative Republican candidate in a major political race.

Such was the attitude of former presidential candidate Gary Hart(pence) in his angry letter to the editor of the Denver Post denouncing them for the high heresy of endorsing Cory Gardner over Mark Udall in the senate race from Colorado. What is most interesting about Hart's letter is what is not in it, namely any complaint about biased coverage on the part of the Denver Post. Instead Hart throws a conniption fit over the Denver Post expressing the "wrong" opinion from the liberal POV:

Your editorial board's decision to endorse Congressman Cory Gardner for the United States Senate ranks as one of the worst endorsement decisions, not only by the Denver Post but by any serious newspaper, in my lifetime. 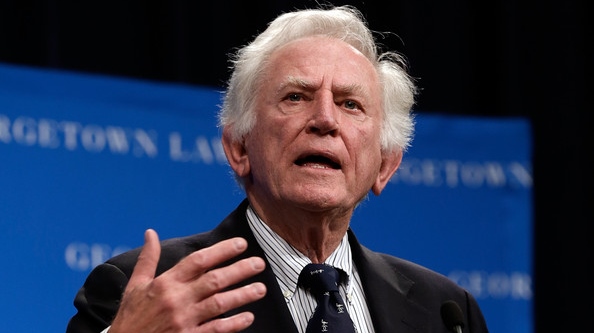 As a Colorado citizen who pays more than ordinary attention to American politics generally and to Colorado politics particularly, I am dumbfounded and appalled by your endorsement. Colorado quite possibly has the two best Senators in the United States and you choose to dismiss one of them. It is flatly false to say that Senator Udall is not a leader or that he is not at the center of major debates. It is much more accurate to say that he is not a self-promoter, which seems to have become the coin of the political realm.

I know for an absolute fact that he is at or near the center of virtually all serious national security, energy, environment, and economic debate currently occurring. I know for a fact that he is widely respected as a serious legislator by Senators of both parties. I cannot imagine from what sources you are deriving your information, but it is clearly not other United States Senators or anyone with a clear picture of what is going on in our nation's Capitol. You have chosen to support a conventional partisan over a serious legislator concerned with the national interest.

For you to conclude that Mr. Gardner will be anything other than a consistent vote for a Tea Party dictated agenda on the major social and economic issues of the day is confounding. Simply because one source called him a "rising star" does not qualify him for Senate membership. I had the privilege of serving with serious Senators of both parties. Mr. Gardner has a very long way to go before even coming close to their standard of statesmanship. Senator Udall, from a distinguished public service family whom I have known and with whom I have served, has the gravitas concerning the future of our nation that a partisan such as Mr. Gardner will never have in his lifetime.

I will leave it to my wife to decide whether to continue her subscription to the Post. I have lost confidence in the seriousness of your editorial judgment.

The world waits in deep suspense as Gary Hart's wife decides whether or not to continue her Denver Post subscription. If the cancellation does occur, it will be only because of a "heretical" opinion on the part of the Denver Post and not because of any alleged news bias.