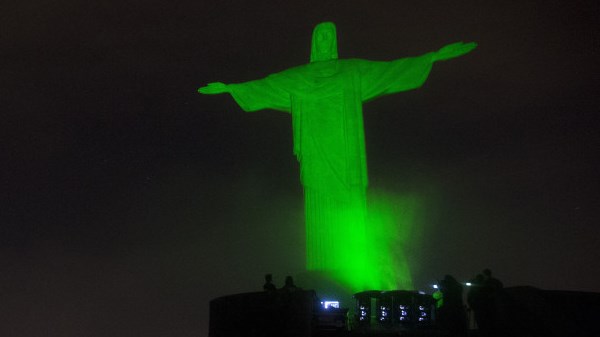 Green Jesus. That is the image that now greets visitors to the Huffington Post Religion page at the very top. If you think that the Huffington Post has an agenda it is pushing, you would be correct. A total of seven stories are devoted to the topic of global warming in general and Sunday's "People's Climate March NYC" in particular.

The extent that the Huffington Post is inappropriately using religion to push a worldwide political program of big spending programs on a problem that doesn't exist can be seen in the "religion" articles used to hype this agenda. The desperation of the Huffington Post to link religion with global warming alarmism produces some hilarious results starting with the very title of this article, Green Spirit vs Climate Change:

This week's All Together segment is called Green Spirit in honor of the giant People's Climate March happening in New York City and around the world the weekend of September 20th and 21st; and the UN Climate Summit the following week. Raushenbush speaks with environmentalist Bill McKibben, Karenna Gore, and Rabbi Lawrence Troster about the spiritual significance of environmental activism and how religious communities are rallying to help save the environment before it is too late. Plus Raushenbush offers a quick round up of the religious news of the week and picks this week's Saints and Sinners.

Don't miss next week's exciting radio episode of Green Lantern vs Evil Capitalists. And now some interfaith hyping of you-know-what:

The seas are rising, the temperature becoming warmer and weather patterns so unpredictable that summers and winters are blending together, becoming less definable. Meanwhile, we continue to emit an increasing number of carbon particles, infiltrating and polluting our air -- exacerbating in particular asthma in children in urban areas.

...Political and civic reasoning will not win the day. The added, supportive voice of the religious community is indispensable if we are to effect policy changes. As UN Secretary-General Ban Ki-moon sets to convene the Climate Summit 2014 on Sept. 23, bringing together hundreds of heads of state and government leaders, we in the faith community are raising our voices, joining together, and vowing to make the world safe from the ravages of climate change.

Ahead of next week's climate summit, faith communities are coming together for the People's Climate March, World Council of Churches and Religions for Peace's Interfaith Summit on Climate Change, Religions for the Earth at Union Theological Seminary, prayer events across the US and an OurVoices.net gathering at the UN Church Center.

Yes, the winter sure blended into summer this year when icebergs remained in Lake Superior as late as July. Perhaps we should all pray for global warming to increase temperatures back to normal to counter the recent frost.

Hey, it's almost Rosh Hashanah and Rabbi Yonah Bookstein delivers up a HuffPo Religion Page story on the subject that sounds like a pitch for more Solar Power R&D:

We have failed as a society to harness the great potential of solar energy to help alleviate the world's energy problems. The sun can offer healing to a planet that is desperate for ways to maintain progress without damaging the environment. Yet, with all the ingenuity in the world which manages to put into the palm of our hands a computer more powerful that the ones which brought us to the moon, the average household relies only on solar energy to power calculators.

Don't look to rabbis to solve the world's energy problems. However, in my discussions with people whose business is energy, and research of reliable studies, I have learned that investments in solar energy -- and renewable energy sources in general -- are far below what experts recommend. While solar to energy conversion rates are improving, meaning that we can harness more energy of the sun per solar panel, we are not directing significant capital into R&D to improve solar energy technology. Imagine if the folks that created the smartphone were given $5 billions to work on solar energy.

So what happened to the $535 million in capital invested by the government in Solyndra? Wouldn't that count as significant (but lost) capital?

And now will all you please bow your heads in silence as Jacob Devaney, Director of the Culture Collective, delivers his version of a sermon?

There are many lenses through which humans see the divine and interpret what is sacred. It is an act of courage to accept that all beings have their own unique connection to the sacred. It is a powerful way to expand ones own faith in the limitlessness of The Divine. Mutual respect, compassion, love, and peace are central themes in all religions, yet there is something even more basic and fundamental that we all share regardless of our faith... the Earth. On September 19-21, the weekend before the United Nations Climate Summit, more than 200 religious and spiritual leaders from across the world will gather at Union Theological Seminary in New York City for the Religions for the Earth Conference. Speakers include Former Vice President Al Gore, Rev. Jim Wallis, Chief Arvol Looking Horse, Dr. Vandana Shiva, Rabbi Ellen Bernstein and more.

That was touching. Almost as touching as Prayer Flags Fly In Solidarity With People's Climate March:

Thousands are gathering in New York City for the People's Climate March on Sunday, but thousands more will be marching, praying, hiking and gathering in solidarity around the United States.

Will there also be schmoozing, noshing, and square dancing?

Now for some exciting news via a sort of religious awakening. Al Gore's daughter has discovered that materialism is one of the root causes of climate change. I kid you not:

Karenna Gore, the Director of Union Forum which has played a primary role in organizing the conference, identified materialism as one of the "root causes of climate change" in an interview with HuffPost. Religion, she said, offers an alternative.

"Spirituality can prompt us to make sacrifices and behave in ways that run counter to materialistic short-term self-interest," Gore said. "Many people experience their sense of moral obligations to others through their religious affiliation. We need the power of religion to affect social change if we are going to counter and reverse what we are doing to the earth."

Additional comment from Karenna Gore is unavailable because she is cloistered aboard a private Gulfstream in deep prayer pleading for divine intervention on behalf of her father to win his lawsuit against Al Jazeera.

Finally, good news for all you worshippers of Zeus, Odin, and Babalu. A pagan mixer courtesy of the Pagan Environmental Coalition of NYC. Some exciting details:

Let’s get together for refreshments and socializing! Light snacks provided by the Pagan Environmental Coalition of NYC. Heavier food, exotic cocktails, and non-alcoholic beverages available for purchase.

Are goat leggings required or is this a casual wear affair?