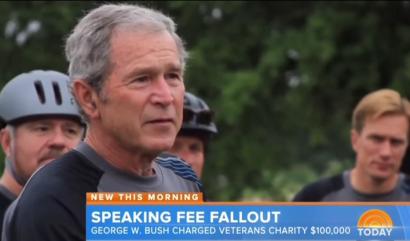 A current hot topic in campaign coverage is Hillary Clinton’s underperformance among millennials, an unusually large number of whom favor the second-tier candidates, Gary Johnson and Jill Stein. The New Republic’s Brian Beutler thinks those 18-to-29-year-olds who aren’t #WithHer don’t grasp what happened the last time a significant portion of the left was lukewarm about the Democratic nominee. In 2000, he helpfully explained in a Wednesday piece, “too many disillusioned young progressives” voted for Ralph Nader rather than Al Gore and thereby brought about the disastrous George W. Bush years.

Should some millennials’ non-support of Clinton lead to a Donald Trump presidency, argued Beutler, “it will be the consequence of a liberal failure to build an oral tradition around the Bush administration…[the] plutocratic fiscal policy; the 9/11 intelligence failure; the war of choice in Iraq sold with false intelligence and launched without an occupation plan; the malpractice that killed hundreds in New Orleans; the scandalousness that makes the fainting couch routine over Clinton’s emails seem Oscar-worthy; and finally to the laissez-faire regulatory regime and ensuing financial crisis that continues to shape the economic lives of young voters to this day.”

Beutler posited that “it’s useful to contrast the way Republicans scapegoated Jimmy Carter (who was not a great president, but more unlucky than genuinely incompetent or malevolent) to the way Democrats have treated Bush (among the worst presidents of all time)…It was Obama’s decision to largely turn the page on the Bush era once he came into office that flushed so many of the tawdry details of [Bush’s] administration down the memory hole.”

Beutler exhorted lefties in their thirties to bring millennials back to Hillary’s side (bolding added):

For those of us whose formative political experiences include the 2000 election, the recount, 9/11, and the Iraq war, the dangers of apathy and third-party voting are seared into our memories for a lifetime. Those who came of political age amid a global recession, the election of a young, untainted, cosmopolitan, black president, and a retrospective rejection of Clinton-era triangulation, have plenty of lived experience shaping their politics, none of which can be directly attributed to a third-party spoiler. It’s up to liberals who fear history repeating itself to connect the dots for them.