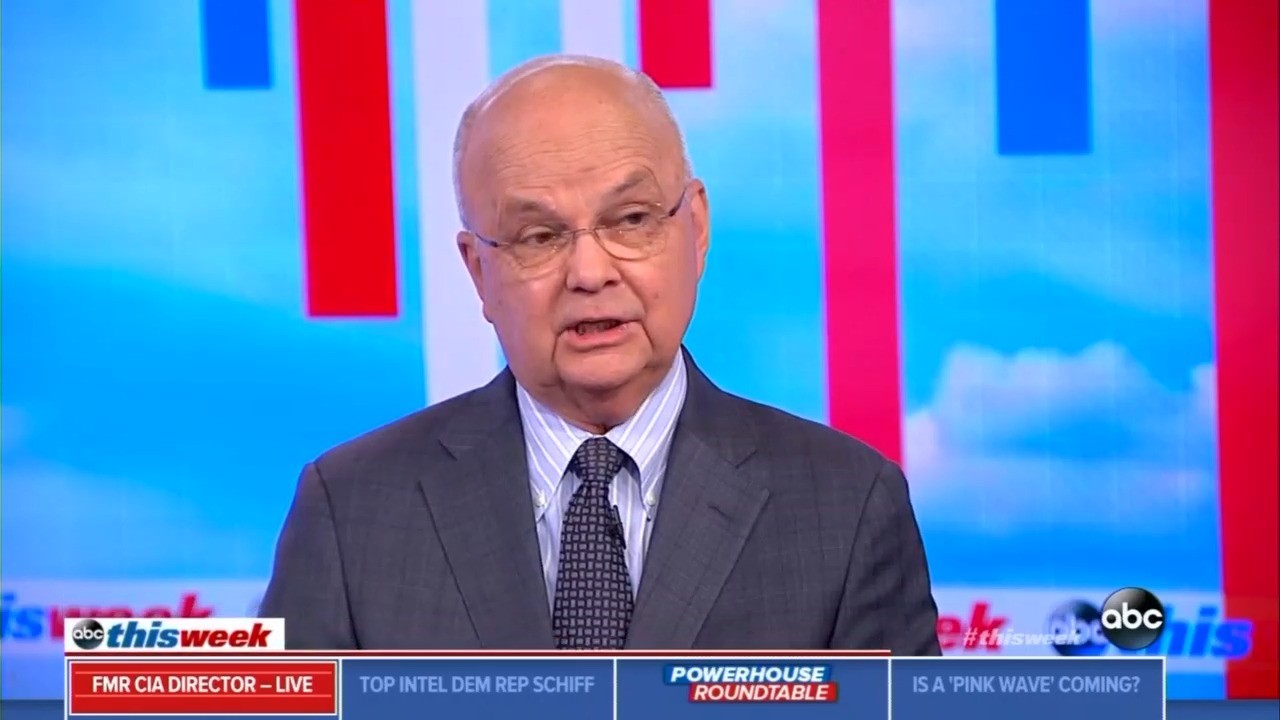 Former CIA Director Michael Hayden appeared on ABC's This Week on Sunday. Hayden criticized President Donald Trump's behavior during the on-off-on North Korean negotiations, and claimed Trump is "trying to delegitimize the Mueller investigation, the FBI, (and) the Department of Justice."

Host Martha Raddatz then asked about statements made in a new book and on TV this past week by former Director of National Intelligence James Clapper, who wants the public to believe that Russian influence swung the 2016 presidential election to Trump.

If Raddatz expected Hayden to confirm Clapper's assessment — Why else would someone who couldn't hold back her tears on Election Night 2016 ask about it? — he forcefully disappointed her.

On Trump-Mueller, Hayden contended that Trump will "throw almost anything against the wall" to delegitimize Mueller. Then, in an astonishing and contradictory pair of statements, he said in one breath that all of Trump's claims about the Obama administration's alleged abuse of its surveillance and spying authority are false, but in the next breath claimed that what they're accused of doing is "stunningly normal" anyway:

MICHAEL HAYDEN: Remember, wiretapping Trump Tower, unmasking U.S. identities, FISA applications that were abused and now we have -- now we have this.

MARTHA RADDATZ: It -- it totally resonates.

Hayden's argument comes across as, "The intelligence community didn't do any of things Trump described" (despite substantial contrary evidence), "but even if they did, it's all perfectly normal."

Raddatz might have believed that Hayden's North Korea and Trump-Spygate comments meant that he would agree with Clapper on Russian election influence. It didn't happen. Hayden effectively said that what Clapper should not have said what he said, and then uttered five words which seemed to catch the host off-guard:

MARTHA RADDATZ: And just very quickly, I want to ask you about a comment from former director of National Intelligence James Clapper, who did work under -

RADDATZ: - President Obama. Listen to what he said on Wednesday.

JAMES CLAPPER: Knowing what I know of what the Russians did, there's a massive effort that they undertook. It stretches credulity, as I said in the book, and logic that -- not to think that they didn’t help swing the election given the fact that that it turned on less than 80,000 votes in three states.

RADDATZ: I don’t know whether you agree with him or not.

HAYDEN: I - look. I, I agree that the Russians affected the election. But how much they affected it is not just unknown, it is unknowable and so we should stop talking about it. Donald Trump is the President.

RADDATZ: Which I was just going to ask you. So you think it is inappropriate from a former --

RADDATZ: -- without, without evidence.

HAYDEN: There - Look. We are here. You invite folks like us on your show because we’re the fact witnesses, not because we have opinions.

RADDATZ: OK. Thanks very much for joining us, Director Hayden, this morning.

While Hayden wouldn't personally call out Clapper, his statement that "we should stop talking about it" accomplished that task anyway.