Those who believe history is presumptively written by the winners haven't seen Francis Wilkinson's attempt to create a bogus narrative on the four-year IRS scandal which appeared at Bloomberg News on Monday.

It will surprise no one that Wilkinson is a career leftist. Wilkinson is a "former national affairs writer at Rolling Stone"; a former partner at the Democratic media firm Doak, Carrier, O'Donnell, Wilkinson & Goldman," consulting with political campaigns and corporations; and has submitted items at The American Prospect, the Huffington Post, and the New York Times.

Wilkinson is currently an editor at Bloomberg View. Apparently there's not a lot of interest in editing the editors there, because, as confirmed by a longtime Tea Party activist, his item claiming the IRS scandal is "fiction" full of gaping holes.

Readers are advised to recall, as they read Wilkinson's woeful effort, that Paul Caron, who is currently the Dean of the Pepperdine University School of Law, maintained a daily rundown of substantive IRS scandal news and views that ran for 1,353 straight days, and has continued to post less frequently but still quite actively since then (bolds are mine throughout this post):

GOP Surrenders Cherished IRS Scandal at Last
The fiction served the GOP for years, yet died quietly this month, forsaken and alone.

The IRS scandal came to a pathetic, whimpering conclusion earlier this month. For half a decade the scandal had kept delinquent members of Congress occupied and served up reliable programming to Fox News and other conservative media. But when Internal Revenue Service Commissioner John Koskinen walked out of his office on Nov. 9, of his own volition, on schedule, his fine reputation intact, the whole greasy production quietly expired.

Koskinen may have a lot of things, including an insufferably smug, "you can't touch me" demeanor, but one thing he doesn't have is a "fine reputation." That's because the charges which led to calls for his impeachment in October 2015 have never been refuted, as CNN.com wrote:

Republicans have said Koskinen has not complied with their investigation.

"Commissioner Koskinen violated the public trust. He failed to comply with a congressionally issued subpoena, documents were destroyed on his watch, and the public was consistently misled," House Oversight Committee Chairman Jason Chaffetz said in a statement. "

... Chaffetz and his 18 fellow Republicans said Koskinen had destroyed backup emails from Lerner, gave the committee false testimony and then did not notify immediately investigators that Lerner's emails were not available.

"Unfortunately this was earned. The IRS commissioner provided false testimony and he destroyed documents that were under subpoena," Chaffetz said on Capitol Hill Tuesday. "If you did that to the IRS, what would they do to you? It's unfortunate to have to get to this point. But it's appropriate and necessary."

Back to Wilkinson at Bloomberg:

The story told by Republicans is so well known that it substitutes for fact. In the first years of the Obama administration, Tea Party groups and other conservative organizations rose up to defy the government. When the groups sought IRS approval for their designations as “social welfare” organizations under the tax code, the IRS targeted them with burdensome queries, harassing the groups while slow-walking reviews of their applications. In this telling, it was a political vendetta – carried out against conservatives by a government agency that many anti-government, anti-tax conservatives especially despised.

The failure to produce evidence occurred because, as just noted, they made every attempt to either destroy it or withhold it. Of course, Wilkinson never mentioned the IRS's obstruction and evidence destruction.

Enough evidence to matter is still available, which explains why the IRS scandal's conspirators are still stonewalling and attempting to enlist the assistance of the courts to keep that evidence under wraps.

This brings me to the response I received from a leading and longtime Tea Party activist after I asked him to read Wilkinson's Bloomberg item (links added by me as support):

Tom, you know this article is simply positioning by the left to continue to cover up the truth. 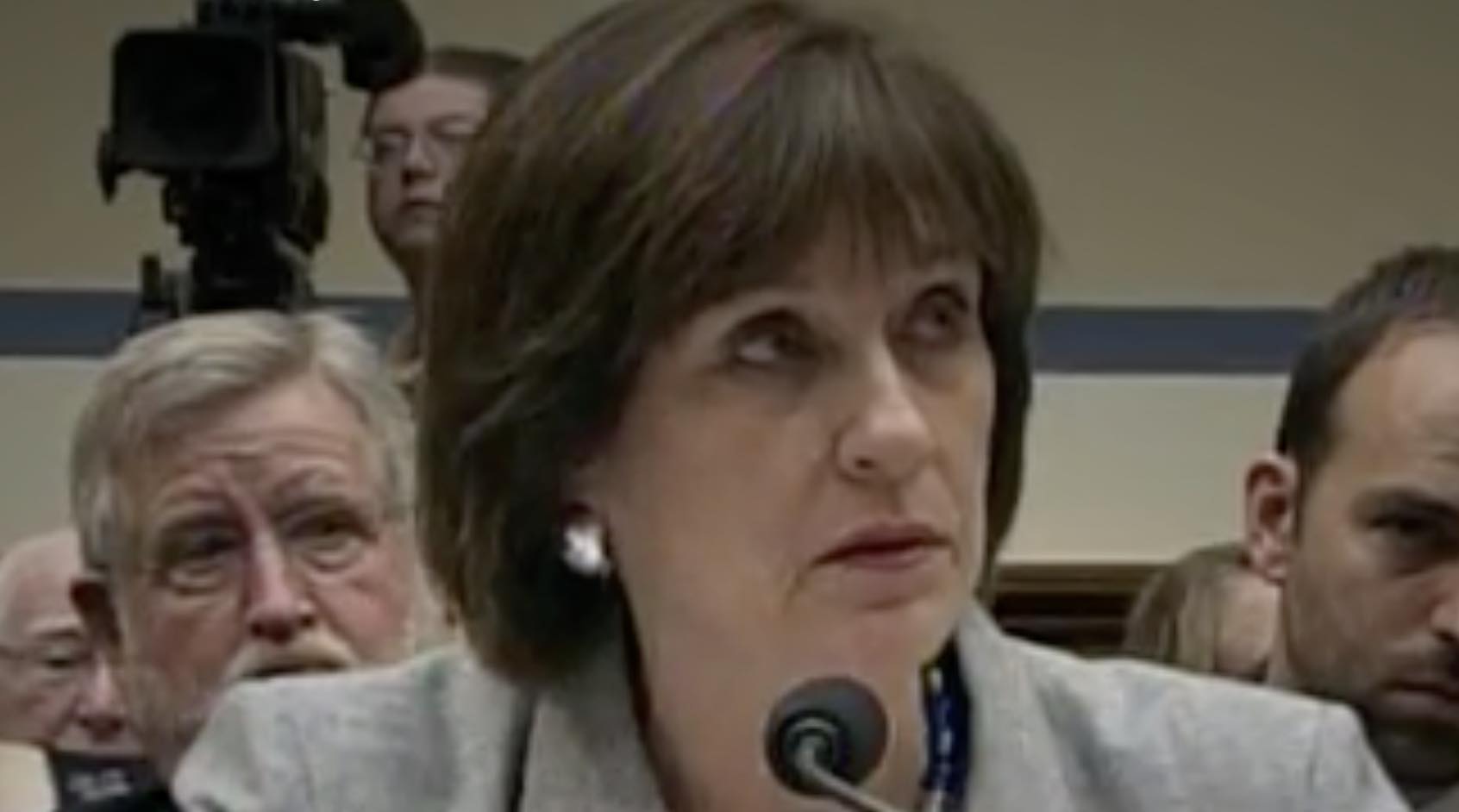 Why else would Lois Lerner (pictured at right) be asking the judge to seal her testimony under oath FOREVER out of fear that, as stated by her lawyer, “or else they could spur an enraged public to retaliate”? Doesn’t sound like Lois Lerner thinks that there was no scandal, does it?

Not to mention that the writer, a leftist propagandist of the highest order, fails to mention that the IRS admitted in Federal Court that what they, the IRS, did was true - they wrongfully targeted US Citizens based only on their political views and names, that doing so was wrong, that they signed an agreement to never do it again, and that they apologized to those who they targeted. Not to mention the $3.5 million dollar settlement in the Cincinnati Class Action law suit where the IRS also admitted guilt.

That being said, there still has never been a real investigation of the actual IRS scandal. Who worked with Lois Lerner in cooking up this plan?  Who got to see the answers to the “opposition research” questions that Tea Party Groups answered?  How many individuals affiliated with the Tea Party groups that were identified in those answers were personally audited by the IRS or had their businesses audited?  None of that has been investigated by anyone and lots of evidence was illegally destroyed.

The aforementioned “hero” of the left according to Mr. Wilkinson’s opinion piece, Mr. Koskinen, destroyed hard drives that were under subpoena by the House Investigative Committee and the DOJ never turned over the document requested by Congress, and most recently the DOJ said there was “no grounds to further investigate Lois Lerner."

I have on my hard drive sworn testimony by IRS Employees in Cincinnati saying. and accompanying emails proving, that not only did Lois Lerner directly order employees to break IRS rules in order to target the Tea Party groups but that Lois Lerner was working with others in the Administration on this “project.”

So, despite this piece of leftist propaganda, the fact is that if we can get a second special prosecutor to actually investigate the IRS Case many in the Justice Department, the IRS, the Treasury and the Obama White House will likely be found to have been illegally involved in using the IRS to target American Citizens in order to affect the outcome of a US Presidential election.

We should also recall that the IRS scandal was first brought to light by Lois Lerner herself in May 2013, in a desperate effort to pass off the entire enterprise as a rogue effort by low-level Cincinnati IRS office employees.

Those two losses were unfortunate, but in return, the Tea Party has given the Senate at least the following conservatives who are far stronger than their establishment GOP opponents would have been if they had prevailed: Mike Lee (Utah), who toppled an incumbent; Marco Rubio (Florida), who defeated that state's incumbent Governor; Ted Cruz (Texas), who defeated that state's Lieutenant Governor; Pat Toomey (Pennsylvania), who hounded the late Arlen Specter into switching parties; and Rand Paul (Kentucky).

Wilkinson is being either disingenuous or delusional if he thinks the Senate isn't more conservative with those five Tea Party-backed Republicans in office instead of seven establishment squishes, or that the Tea Pary's influence in Washington hasn't been a net positive for freedom-loving Americans.