The world finally got an answer today to this question: "How many serious allegations of sexual abuse of minors have to be brought forth against Democrat Mayor Ed Murray before he'll do the right thing and resign?" Early Tuesday, Murray's fifth accuser came forward. Hours later, he resigned, effective Wednesday afternoon.

Thus ends one of the most disgraceful sagas in the history of local media anywhere. The Seattle press knew about allegations by not one, but two of Murray's alleged victims in 2008, five years before he became the city's first openly gay mayor, and failed to even report their existence.

Much of the press still insists on protecting the Democratic Party from its decades-long association with Murray.

During the drafting of this post early Tuesday evening, Reuters initially posted a three-paragraph breaking-news item which failed to tag Murray as a Democrat:

At Fox News, according to Instapundit's Ed Driscoll, an earlier report on Murray's resignation which the network attributed to its own Frank Miles and The Associated Press, did not include Murray's party affiliation. When I checked on an updated version of that report at 6 p.m. Eastern Time on Tuesday, Murray's party was ID'd — in Paragraph 11 of 13. A large photo at that story also failed to identify Murray as a Democrat.

Murray's late-paragraph party ID at the Fox-Associated Press story is especially odd, because the version of the AP story I found with a time stamp of roughly 5 p.m. tagged Murray as a Dem in its third paragraph:

The press's "Hide (or deeply bury) That Party" when a prominent Democrat or leftist is involved in scandal or crime is disgraceful but hardly new. Thus, its immediate handling of Murray's resignation on Tuesday, though of course disappointing, is not surprising. (I would argue that this Hide-the-Party situation would be even worse if it weren't for center-right sites like NewsBusters and others monitoring and calling out the establishment press in these instances.)

What's especially galling and arguably unforgivable is how, way back in 2008, when he was a state senator, the Seattle and Washington State press became aware of Murray's alleged inability to keep his hands off minor-aged boys during the 1980s and chose not to report what they had learned. The count when the Seattle Times and others outlets in the Emerald City and the Evergreen State buried these allegations was "only" two. Now, as seen above, it's five. We may never know if Murray victimized other minor-aged boys, or how many.

Only when actual legal actions were about to be filed against Murray in April, as I noted in a related NewsBusters post at the time, did the Seattle Times offer a pathetic, lame defense of its 2008 inaction:

Why we are publishing the allegations against Mayor Ed Murray, but didn’t in 2008

In March 2008, The Seattle Times received a phone call from a man claiming Ed Murray sexually abused him as a child. The man, Jeff Simpson, also called various lawmakers and other media organizations, making the same claims.

The Seattle Times investigated allegations by Simpson and another man, Lloyd Anderson, seeking documentation or witnesses to corroborate their accounts. Among other things, we learned that an attorney for Simpson had withdrawn from a potential lawsuit against Murray, then a state legislator.

Ultimately, we felt we did not have enough information to publish these very serious accusations.

We decided we needed to take another look when we learned recently that a Kent man was preparing to sue now-Mayor Murray.

A lawsuit of this nature against a public official is news.

... We don’t take these decisions lightly, and make them only after lengthy discussions. We know this is a disturbing story. But we cannot shy away from important stories simply because they make us uncomfortable. 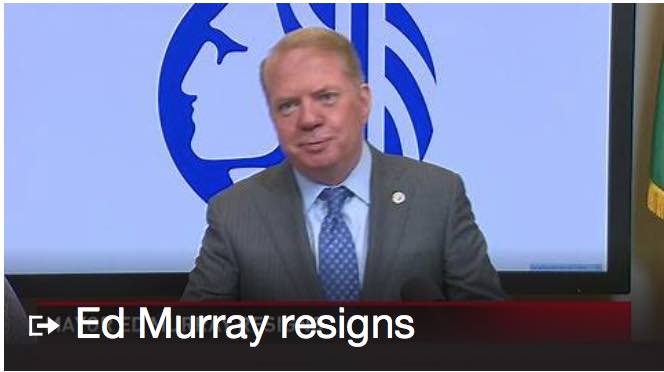 As I noted at the time, this was hogwash:

In other words, in Seattle, your serious allegations against a "progressive Democrat," even if there are two people making them ... won't get recognized by the local paper, which claims to be serving as a watchdog, unless and until you file a lawsuit and force the issue.

... The idea that there would have been similar restraint if by some miracle Seattle had a Republican or conservative mayor is too ludicrous to even entertain.

The Seattle Times and other press outlets in the Emerald City and Evergreen State will never, ever fully escape the thoroughly justified suspicion that advancing the career of the lockstep-progressive, openly gay Ed Murray, while hoping that his victims would just go away, was more important than doing their jobs as journalists.