Almost immediately, "Pickle Truthers" in the Trump-deranged media who couldn't imagine that a 9 year-old could really have written such a letter embarked on an exhaustive boyhunt to verify Pickle's existence.

Many clearly operated on the assumption that Pickle was a figment of Trump's fevered imagination, and instigated a detailed forensic analysis of the letter. That letter is seen below: 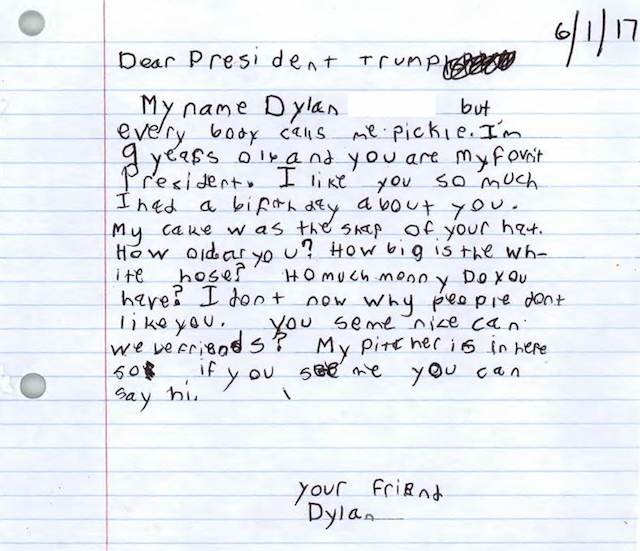 Just a few examples of over-the-top skepticism included the following:

It soon became obvious that a number of tweeters, including many in the press, weren't joking as they questioned Pickle's existence. Ultimately, the Washington Post put reporter Monica Hess on the case:

... then the comments became more investigative. Was it odd that the notebook paper, which theoretically arrived in the mail, didn’t seem to have the crease marks one would see on a letter folded into an envelope? Was it unusual that a young child would have spelled “people” and “friend” correctly, but then mixed up “how”? What kind of 9-year-old would request a birthday party themed around a 71-year-old man?

“The ‘kid’ who wrote the Pickle letter,” someone posted, as if they had uncovered a second set of Pentagon papers, “has the same name as the [Vice President Pence’s] cat.”

Hesse then proceeded to insist that the skepticism was, naturally, all Trump's fault:

As Wednesday’s investigation into the veracity of Pickle barged on ahead, weary Trump supporters noted the lunacy — the desperation — of people who would dedicate so much energy to tearing apart a sweet letter from a child.

It was lunacy. But it was not lunacy that came out of nowhere. It was lunacy born of the times, incubated in a world of secret Russian meetings, fudged inauguration sizes, and grandiose statements from a commander in chief whose greatest pastime and hobby was self-mythologizing.

Hesse clearly had no sense of irony as she wrote this.

It's turning out that the "secret Russian" contacts of genuine importance during the 2016 U.S. election campaign largely involved Democrats who allegedly arranged to pay for the infamous Trump-Russia dossier produced by Fusion GPS. This and other matters, including hundreds of illegal alleged unmaskings Obama administration officials, now point to the idea that it was the left which was really engaged in trying to rig the 2016 general election.

Hesse consulted two "handwriting and children’s cognitive experts." One "noted that the margins on the right side of the paper were very wide, which can indicate a feeling of concern about the future." I'll have to remember that the next time I change the settings on my Word documents.

Of course, despite how "improbable ... it may seem," according to Jezebel's Prachi Gupta, Hesse reported that Pickle is indeed real:

His name was Dylan. When he was a baby, his older brother started calling him Dyl-Pickle, and eventually the Dyl dropped away.

So, we found Pickle. He is real, definitely real. He likes watching baseball and riding his scooter and Donald Trump.

As Jim Treacher at the Daily Caller wryly observed, it's a relief that wealthy Post owner Jeff Bezos "can afford to pay people to track down little kids who write letters to the President of the United States, just in case it’s all some sort of trick."

But the real story here is at Gatehouse Media's RecordNet.com, which covers local news in Stockton.

A story said to be a compendium of wire service reports on Dylan Harbin reveals the following (Dylan's misspellings are uncorrected):

... Dylan Harbin received the shoutout of shoutouts Wednesday when his letter was read by new press secretary Sarah Huckabee Sanders during the daily press briefing. “My name is Dylan but every body calls me Pickle ... I’m 9 years old and you are my favorit president. I like you so much I had a birthday about you. My cake was the shap of your hat.”

So you can refuse to bake a Donald Trump cake for a little boy without consequences. There's nothing wrong with that, but it's pretty stunning that Dylan's mom, SueAnn Harbin, appears to have tried pretty hard to find a bakery willing to serve her, and couldn't. But if you as a baker won't bake a cake celebrating a same-sex "marriage," your business can and likely will be sued or fined out of existence.

I hope Mrs. Harbin eventually tells Dylan why she had to be the one to bake his Donald Trump cake.