Despite Obama's Hostility and Stunts, CNN Blames Trump For 'Strain' Between the Two

President Donald Trump has been in office for almost five months. CNN's Kevin Liptak, whose network bio still brags about how he, as "White House producer," "has traveled the world covering President Obama," noted in a Saturday report updated Sunday morning that Trump and Obama "haven't spoken or seen each other" since Inauguration Day.

Gosh, I wonder why?

CNN.com's headline naturally blames it all on The Donald: "Trump's strain with Obama marks departure from presidential fraternity."

There's plenty of blame to spread around, but the idea that it's all on Trump, or even mostly on Trump, is ludicrous.

Here are a few paragraphs from Liptak's ludicrous effort (bolds are mine throughout this post):

... For a President who seeks extensive counsel from outside the White House -- in calls to old friends, business executives, and even despotic foreign leaders -- Trump has largely forgone advice or guidance from any of the men who have held his job previously. 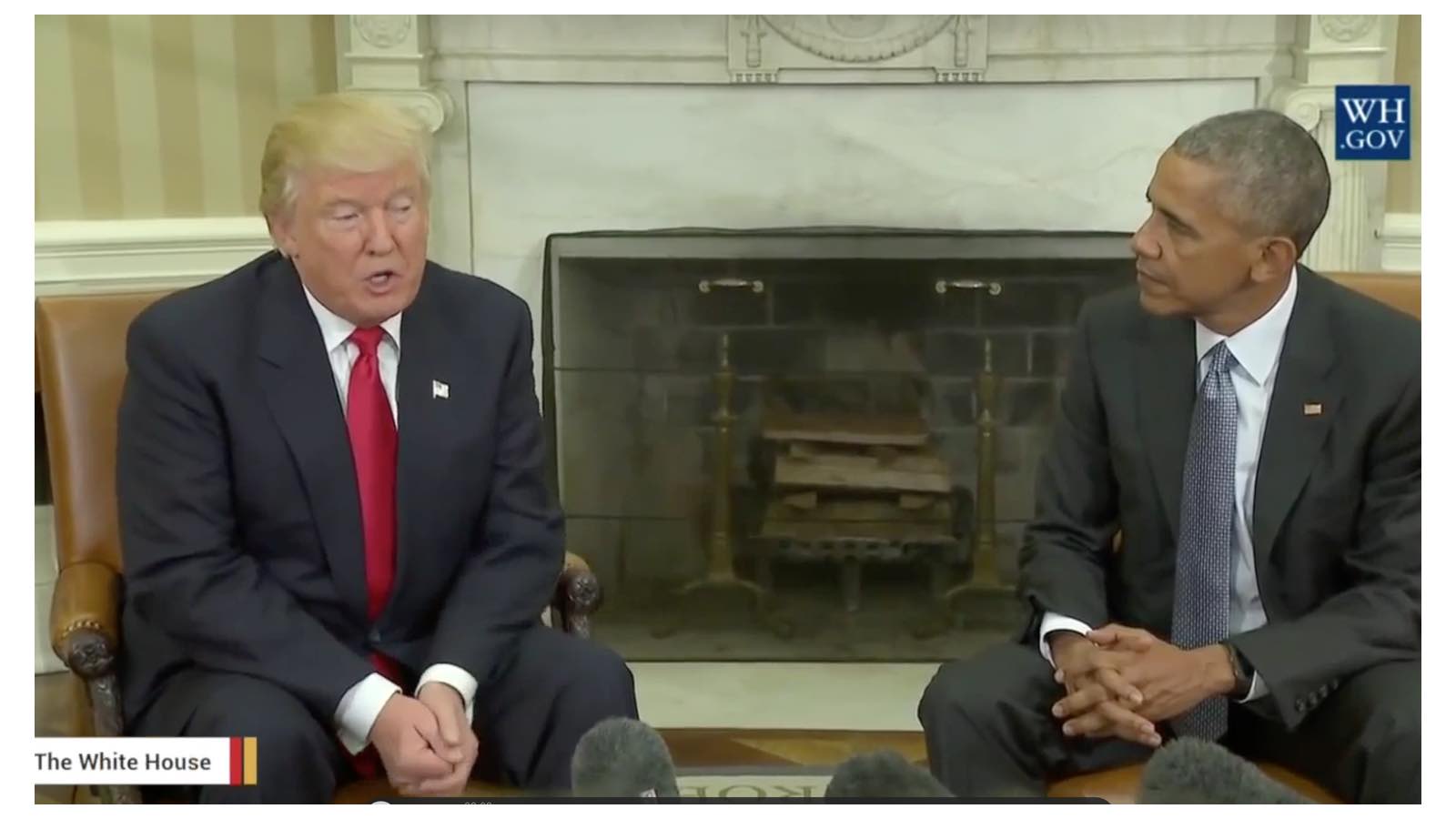 In the months after Trump and Obama carried out a peaceful hand off of power, the two have failed to develop any sort of working relationship, according to White House advisers and former administration officials.

... Perhaps it's a predictable outcome for two men with a long and bitter history; to be sure, the ice-out is the product of deep-rooted enmity that extends well beyond differences in policy or style.

But in the scope of recent history, it's unprecedented for a sitting president and his predecessor to eschew even the faintest of ties.

If that final excerpted statement is true — and it's not all that clear, depending on your definition of "recent" (see Jimmy Carter and Ronald Reagan) — there are at least four "unprecedented" reasons for this situation which Liptak either didn't mention or downplayed.

Trump's strident public questioning of why Obama's birth certificate hadn't been seen led to the White House releasing what it claimed was the long-form version of that document in April 2011.

This episode bothered Obama and his thin-skinned administration to such a degree that he and his staff, while allegedly engaged in governing the country, put extraordinary effort into making the 2011 White House Correspondents Dinner a bullying, Trump-bashing extravaganza:

... Obama took his criticism of Trump to a higher level of roast at the White House Correspondents' Association Dinner. With Trump in attendance, Obama needled him on the issue by walking out to Rick Derringer's "Real American" and later "revealing" his "long-form birth video," which ended up being a clip from "The Lion King."

Obama noted that Trump was in the room and then went after him. "I know that he's taken some flak lately, but no one is happier, no one is prouder to put this birth certificate issue to rest, and that's because he can finally get back to focusing on the issues that matter, like did we fake the moon landing? What really happened in Roswell? And where are Biggie and Tupac?" Obama said.

He then teased Trump about his "credentials and breadth of experience" by citing a tough decision that Trump had to make on a then-recent episode of "The Apprentice" that involved firing actor Gary Busey.

Obama even pointed to a mock-up picture of what the White House could look like if Trump ever became president — with an added high-rise, a neon sign with Trump's name on the facade and a whole lot more gold.

The linked ABC report from just after November's election notes that "The edgy insults didn't stop in 2011." ("Edgy" is apparently a synonym for "rude, inappropriate, and unpresidential" in the network's dictionary.)

The insults went into especially high gear once Obama embarked on the second unprecedented element affecting the relationship.

Breaking with tradition set by every other sitting president in my lifetime, Obama, seeing that Hillary Clinton could actually lose the 2016 general election to Trump, stumped aggressively during the campaign's final two months. This is something the three presidents who could genuinely have assisted their party's putative presidential successor — Bill Clinton in 2000, Ronald Reagan in 1988, and Dwight Eisenhower in 1960 — deliberately did not do. (The assistance of George W. Bush in 2008 or LBJ in 1968 to their party's nominee clearly would not have been helpful in the circumstances.)

But Obama went even further, choosing to make the election a referendum on his eight years in office and "his legacy." To the already long of list of excuses Mrs. Clinton has identified as reasons for her loss, she should consider adding "Obama portrayed me as his third term at crunch time, and the voters in states representing an Electoral College majority didn't want that."

The ABC report linked earlier notes that Obama's penchant for insults in place of argument "became more pointed and political during the 2016 presidential campaign."

The third unprecedented element, which Liptak did mention, is "Trump's March tweets accusing Obama of ordering surveillance of Trump Tower." But Liptak insists that it is a "baseless claim, which Obama's team denied, (and) was said to irk and exasperate the former President."

Sorry, Kevin. Excuse the pun, but that insults our intelligence.

Among the insulted is liberal lawyer and columnist Jonathan Turley. Reacting to news that "intelligence is said to leave no doubt the Obama administration, in its closing days, was using the cover of legitimate surveillance on foreign targets to spy on President-elect Trump, according to sources," Turley concluded that "Trump was right after all about the Obama administration wiretaps" in late March.

There's a fourth unprecedented element which would cause any president interested in their administration's self-defense to cut off ties with their predecessor. Described as "Obama reemerges," Liptak pretends that it's something recent.

That's nonsense. Just nine days after Trump's inauguration, Obama signaled his intent to be involved in the anti-Trump "resistance" by (through a spokesperson) publicly condemning Trump's temporary travel ban from several countries. That ban has since been hung up in courts where judges have unconstitutionally decided that they can usurp the role of Commander-in-Chief. In March, Obama had a private meeting with Silicon Valley leaders from the same companies his snooping NSA had co-opted. In May, he met with German Chancellor Angela Merkel before Trump did, prompting a Washington Examiner editorial to tell readers that "he essentially trolled Trump during the president's first official trip abroad."

Kevin Liptak's and CNN's attempt to place the onus on Trump for this non-relationship doesn't pass the stench test, let alone the smell test.

One suspects that both Donald Trump and Barack Obama are perfectly content not to be communicating, for their own individual reasons. In fact, both the left and the right would be having serious cases of indigestion if it were any other way.