One would hope that the Washington Post, where the news masthead is "Democracy Dies in Darkness," and whose emails soliciting subscriptions tell recipients that "Democracy needs great journalism," searched far and wide for the most credible person they could possibly find to criticize the foreign-policy impact of how the Trump administration "twists the truth." Apparently, the best person they could find for the job was ... Susan Rice?

The op-ed's author is indeed the same Susan Rice who "was national security adviser from 2013 to 2017 and U.S. permanent representative to the United Nations from 2009 to 2013."

Rice claims in the op-ed that the Trump administration's "disturbing pattern of behavior ... poses real and potentially profound dangers to U.S. national security" (bolds are mine throughout this post):

The foundation of the United States’ unrivaled global leadership rests only in part on our military might, the strength of our economy and the power of our ideals. It is also grounded in the perception that the United States is steady, rational and fact-based. To lead effectively, the United States must maintain respect and trust. So, when a White House deliberately dissembles and serially contorts the facts, its actions pose a serious risk to America’s global leadership, among friends and adversaries alike.

This is coming from one of the leading officials of an administration which never leveled with the public about several crucial foreign-policy matters.

The most well-known (but not the worst) example was the Obama administration's serial lies about the facts surrounding the Benghazi terrorist attack which killed U.S. Libyan ambassador Christopher Stevens and three others.

Rice's role was particularly egregious, as she made the rounds of all five major TV talk shows on the Sunday after the attack insisting that an anti-Muslim video sparked it. It is now established beyond doubt that the Obama administration, including Hillary Clinton and Obama's national security advisers, knew almost immediately that what occurred on September 11, 2012 was a pre-planned terrorist attack having nothing to do with an allegedly offensive video.

The crux of it is that during and well after the chaos of the attacks on the State Department's outpost and nearby CIA annex in Benghazi, Clinton and the Obama administration promoted a false narrative for public consumption: that the violence came from a spontaneous outburst of mob anger. Although Clinton confided to her daughter, Chelsea, in an email that night that an al-Qaida faction was responsible, for two weeks she let fester the story that mob action, not a planned assault her department might have anticipated, killed her employees."

Another example of public obfuscation was the so-called Iran nuclear "deal."

The Obama administration began negotiating in secret with Iran in early 2013. When the Associated Press learned that such discussions had commenced, it complied with administration requests not to disclose them. From the time when the early editions of a "deal" were announced through its completion, important "side agreements" were never disclosed (and the Obama administration, as far as I can tell, continued to deny their existence to the very end). What has been learned about those side agreements reveals that Iran has far more leeway and opportunity to clandestinely weaponize its nuclear materials than the publicly disclosed "deal" indicates. Oh, and we shouldn't forget the $1.3 billion in de facto ransom payments — in untraceable cash — the Obama administration delivered or made sure were irretrievably on their way to Iran before hostages it illegally held were freed.

Rice frets that a Trump administration with waning credibility won't be able to rally other free-world nations around important causes: 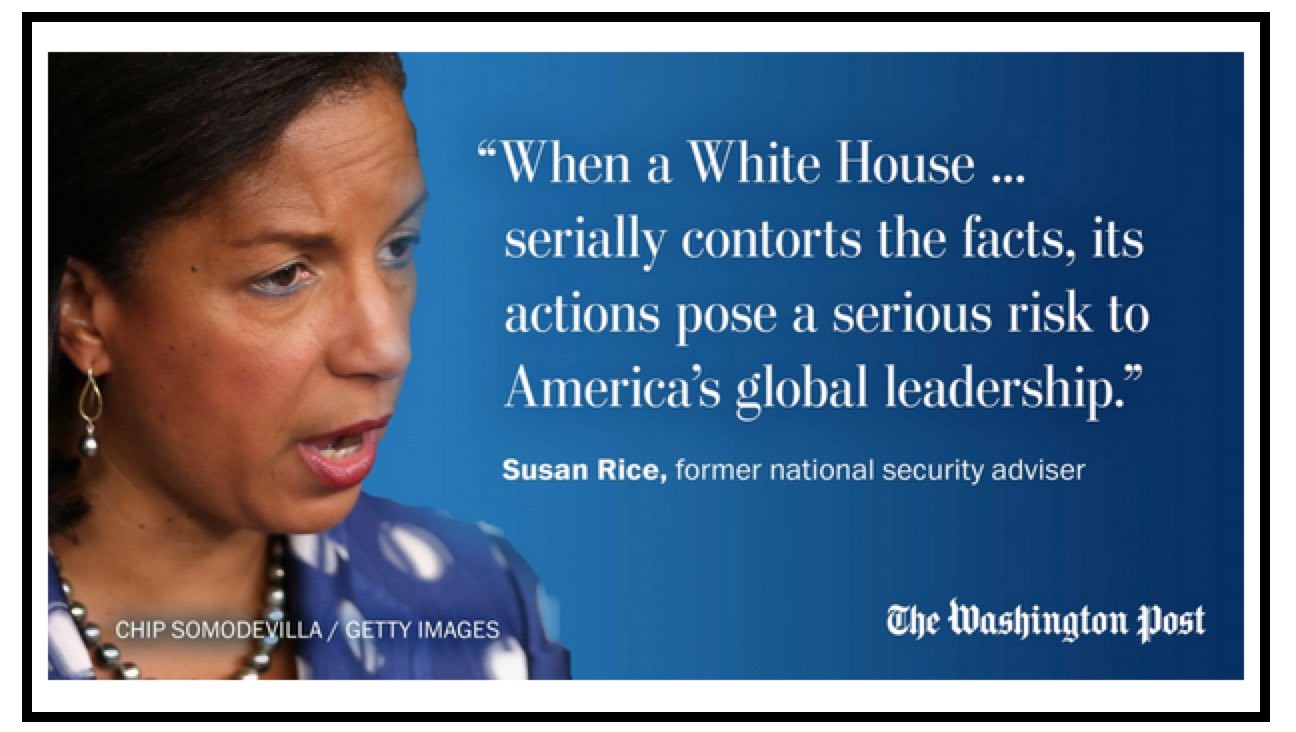 First, U.S. power is frequently a function of our ability to rally other countries to join our cause. President George H.W. Bush famously gathered some 30 countries to expel Saddam Hussein from Kuwait in 1991. President George W. Bush enlisted NATO and other countries to fight al-Qaeda in Afghanistan after 9/11. President Barack Obama built broad coalitions to combat the Islamic State; impose sanctions on Iran after the discovery of a secret nuclear facility at Fordow; punish Russia for its actions in Ukraine; conclude the Paris climate agreement; and halt the Ebola epidemic.

Does anyone else notice the glaring omissions of both the Iraq War and Syria?

The left will never acknowledge that President George W. Bush assembled a coalition of nations to oust Saddam Hussein and ultimately win the Iraq War — a win which the Obama administration disgracefully squandered by having U.S. troops prematurely leave the country at the end of 2011 to protect his left flank in the runup to the 2012 presidential election. This premature withdrawal led to horrible ISIS-related suffering in that country, and the loss of cities which had been previously liberated by U.S.-led troops at the cost of considerable bloodshed and treasure. As I wrote in late 2011 at my home blog: "If ... the decision to completely withdraw backfires — and, sadly, there is reason to believe it will — the consequences will be completely on Barack Hussein Obama." Now his responsibility is a matter of objective history.

President Obama drew a "line in the sand" on Bashir Assad's use of chemical weapons, and backed away from it. It turns out that he did so because Iran told him to:

Wall Street Journal reporter Jay Solomon, who recently wrote a book called "The Iran Wars," told MSNBC on Monday that the Obama administration's determination to close the Iran nuclear deal is to blame for the failure to act on its own red line in Syria.

"When the president announced his plans to attack [the Assad regime] and then pulled back, it was exactly the period in time when American negotiators were meeting with Iranian negotiators secretly in Oman to get the nuclear agreement," Solomon said.

"US and Iranian officials have both told me that they were basically communicating that if the US starts hitting President Assad's forces, Iran's closest Arab ally ... these talks cannot conclude."

The Islamic Revolutionary Guard Corps, a powerful military arm in Iran, reportedly "would not accept a continued engagement with the US if its closest ally was being hit," Solomon said.

... Many foreign policy experts have said that Obama's decision not to attack damaged US credibility in the international community.

Estimates of the death toll in Syria run as high as 470,000, while refugees from the Syrian civil war — accompanied those who have opportunistically used it as a means of escape or for the purpose of jihadist infiltration — have created a migrant crisis in Europe which threatens several nations' civil order.

In a more immediately relevant matter, Rice crowed in her opening paragraph that "On Monday, FBI Director James B. Comey testified plainly that 'I have no information that supports' President Trump’s accusations that his predecessor ordered the 'wires tapped' at Trump Tower."

Well, okay, but regardless of what Comey says, there's this, which came out Wednesday, but which Rice in her latter role as Obama national security adviser almost certainly already knew:

He said none of the reports he had read mentioned Russia or Russians and he was unsure whether the surveillance occurred at Trump Tower -- as President Trump has suggested. Nunes also was unsure if then President-elect Trump was captured by the surveillance, which occurred in November, December and January.

Nunes's caution on tagging "Trump Tower" and Trump himself is understandable, but any layman who realizes that the Trump transition efforts were almost entirely conducted at Trump Tower, with Trump himself heavily involved throughout, should be able to see that the chances that surveillance by the Obama administration at Trump Tower did occur, and that it at least peripherally captured Trump himself in at least one phone or other conversation, or email, or text — i.e., that he had his "wires tapped" in the generic, all-inclusive" sense — are far from remote, regardless of whether James Comey has "information" about it.

Susan Rice's criticism of the Trump administration's credibility is as valid as that of a fired football coach who failed to win a game in his final year going after his successor. That anyone at the Washington Post believes she deserved a platform to criticize her administration's successors demonstrates that its pledge to "great  journalism" is a sham.