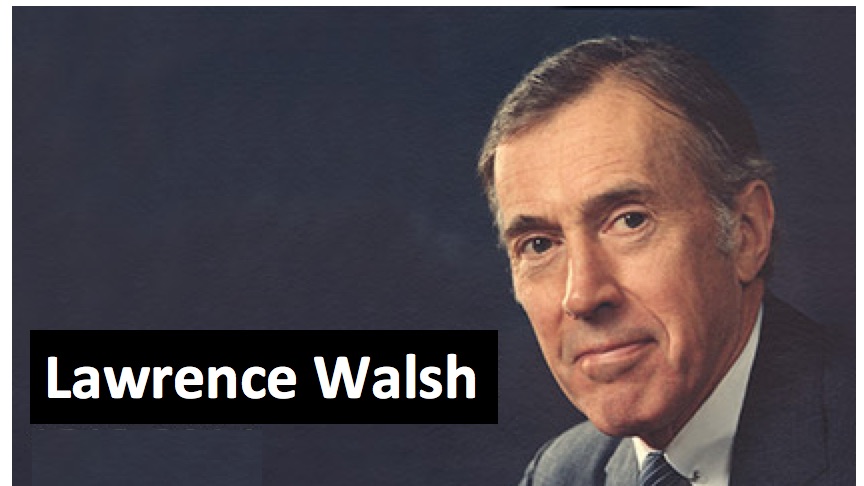 FBI Director James Comey's letter to Congress indicating that the bureau has "learned of the existence of (Hillary Clinton) emails" which he concluded must be reviewed "to determine whether they contain classified information" has led to all kinds of people declaring the move an "unprecedented" October surprise.

Even some people who should know better have called it the "Mother of All October Surprises." Perhaps it ultimately will be, but as things currently stand, it's not really in the running for current champion.

The press's institutional memory is so weak, and its insistence on burying long-ago inconvenient truths is so strong, that no one I'm aware of has made a comparison to Special Prosecutor Lawrence Walsh's indictment of former Reagan Defense Secretary Caspar Weinberger on October 30, 1992, and Walsh's obviously calculated decision to include a reference to incumbent President George H.W. Bush in his filing. MSNBC's Joe Scarborough, who one would expect to remember its brutality and dishonesty, failed to do so in a telephone interview Friday afternoon.

Scarborough's political career began when he ran for Congress as a Republican in 1994, two years after Bill Clinton defeated Bush 41. The idea that he can be unaware of Walsh's move, which remains the Mother of All October Surprises, is virtually inconceivable.

But there was Scarborough this afternoon, in an interview with MSNBC's Steve Kornacki, citing as the biggest October surprise ever something that had absolutely no chance of changing a preordained election result:

Transcript (beginning at the 0:10 mark):

STEVE KORNACKI: Joining me now by phone, the host of Morning Joe, Joe Scarborough. Joe, thanks for taking a few minutes here.

Let me ask you first to weigh in on this question. We heard two different answers to this, one from Kellyanne Conway, who said, "Look, the FBI has no choice but to put out an announcement like this, because they would be crucified if they waited until after the election to say they have come into possession of new emails" potentially.

You had Brian Fallon from the Clinton campaign saying, "Absolutely irresponsible to put something out there unless you have hard evidence, because it causes all sorts of speculation.

Where do you come down on that question of the timing on this?

JOE SCARBOROUGH: Well, you know we're in a political fog right now, sort of a fog of political war.

And so we really don’t know. We don't know what James Comey knows. The one thing that both Brian Fallon and Kellyanne Conway both agree with is there has to be transparency.

I really, though, when you listen to Brian Fallon’s words, that this is the worst of all possible worlds for Hillary Clinton. It’s the truth. The FBI has put the Clinton campaign in a no-win position right now by dropping this 11 days before the election.

This has to be one of the biggest October surprises in the last 50 years. You think of Kissinger in '72 declaring that peace was at hand 11-12 days before the '72 election, But that elections really wasn’t that close anyway.

But it’s more bad news for the Clinton camp this week, with the ObamaCare premiums going up, the Clinton Inc. stories, and now this.

But I've got to say, it also, it also raises again the question of James Comey’s leadership at the FBI. Delivering a long scathing statement back in early July before deciding no to indict Hillary Clinton. Over half of Americans believe Hillary Clinton should have been indicted, and believe that James Comey gave, cut her a special break.

But then you have James Comey after he decides not to indict her, then making an unprecedented statement. You either indict or don’t indict. You don't play for the cheap seats, and that’s what Comey looked like he was doing back in July.

And then you had his testimony on Capitol Hill saying that she wasn’t honest and trustworthy. Then you had his decisions to let Cheryl Mills enter testimony. And now you have this decision 11 days before the election. It really is confounding.

But unless there is some major change, game-changer in these e-mails, then you have to wonder why James Comey decided to weigh in 11 days before everybody goes to the polls. It's absolutely staggering.

Well, perhaps it is staggering. But Kissinger's "We believe that peace is at hand" announcement in 1972 was validated three months later in late January 1973 when the parties involved signed a peace treaty. Nixon completed the withdrawal of American troops the next year. In other words, Kissinger wasn't blowing smoke in late October 1972. (Why Vietnam fell anyway two years later is a topic for another time, except to note that to expect communists to honor peace treaties has virtually never proven to be a wise decision.)

Additionally, though it's early, it also appears that a conscientious federal law enforcement officer reporting to Congress like Comey, having come across what he must believe is likely compelling new evidence, has little choice but to report what he knows as soon as he knows it, regardless of the election calendar.

By contrast, Lawrence Walsh, in his sixth year as Iran-Contra prosecutor, was under no compulsion to indict Cap Weinberger on October 30, 1992.

As it turned out, Walsh also had no basis to issue the indictment. What he appeared to have is an obsession with demonstrating that Bush 41 knew about Iran-Contra when he was Vice President under Ronald Reagan:

... Walsh was investigating the Iran Contra scandal and he had spent six years with little to show for it. After this period, he was seeking to indict former Secretary of Defense Caspar Weinberger. Walsh initially indicted Weinberger in June of 1992, but the indictment was thrown out on technical grounds. ...

Walsh decided to indict Weinberger again. He then made two extremely dubious decisions. First, and most problematically, he had the re-indictment of Caspar Weinberger filed on October 30, the Friday before election day. What possible legitimate reason could there have been to file it then rather than the following week? What reason other than the illegitimate one to harm Bush’s candidacy could there have been for filing the indictment on that day?

Second, Walsh included in the indictment the words “VP favored” from Weinberger’s notes of an important meaning. This suggested to some and was played up by the liberal media that Bush was at a meeting he had denied attending. Thus, it could be used to support the claim that Bush was actually more involved in Iran Contra than he claimed and that he had lied about his involvement. Significantly, this was not necessarily the case nor was it necessary to include it the indictment.

The Weinberger indictment created an enormous media response and may very well have swung the election. On the Friday before the election, prior to the release of the re-indictment, the Bush internal tracking poll (as well as the Gallop poll of the previous day) indicated a surging Bush was tied with Clinton at 39 percent, with 12 percent supporting Perot, and an unusually large 10 percent still undecided. The re-indictment ended Bush’s surge and reversed the momentum. The Saturday Bush internal tracking poll indicted 39 percent for Clinton, 32 for Bush, and 19 percent for Perot.

Even Robert Pear at the New York Times was stunned at Walsh's audacity, though he saved that de facto assessment for the final paragraph of his October 31, 1992 story:

Mr. Walsh's relations with the Bush Administration have been frigid. Prosecutors could have used any of more than 1,700 pages of Mr. Weinberger's notes to show that he failed to comply with Congressional requests for his records relating to the Iran-contra affair. Mr. Walsh appeared to select one that was acutely embarrassing to the President.

The October 30, 1992 indictment of Weinberger was thrown out just 43 days later. The reasons why prove that the indictment was a bogus preelection hit:

A Federal district judge today threw out a one-count indictment that was brought against former Defense Secretary Caspar W. Weinberger four days before the Presidential election and created an uproar when Republicans asserted that it had contributed to President Bush's defeat.

In his ruling the judge, Thomas F. Hogan, said the new charge violated the five-year statute of limitations in the Iran-contra case and improperly broadened the original indictment that was filed in June against Mr. Weinberger. The one-count indictment was returned by a grand jury on Oct. 30.

A lawyer as experienced as Walsh should have known, and I believe did know, that filing a charge past an established statute of limitations deadline rarely if every succeeds. The judge's reported reference to how the October 30 indictment "improperly broadened the original indictment" is likely more evidence that Walsh filed a Hail Mary indictment to smear the presidential incumbent.

Though the press has tried to memory-hole the history of Walsh's stunt — as Tim Graham at NewsBusters noted when Walsh died in 2014, the TV networks ignored his dirtiest of dirty tricks — MSNBC's Scarborough, with his Republican background and his initial Contract With America class conservatism, should have remembered.

Joe, if you don't remember it, almost no one will, and most of those in the media who do would rather the nation completely forget it — especially now.