Among the WikiLeaks documents recently released is a 2008 email with an attachment running to dozens of pages telling Democrats how to "maximize what we get out of our media polling."

Fox & Friends covered this story Monday morning. Very few other online and broadcast outlets have. A popular excuse, which even people who should know better are swallowing, is that this advice is for candidates and their campaign managers. That's partially true, but it doesn't explain away the reference to media polling above, and it ignores the fact that many of the same polling organizations which advise the campaigns also are involved in compiling the media-sponsored polls released to the public.

The Fox & Friends segment which follows has many of the key strategies and enough information about how "media polling" can juice response which favor Democratic Party candidates and causes:

DOOCY: All right. Speaking of rigged, thanks to WikiLeaks we have just seen exactly how John Podesta and company over in the Clinton camp were going to — they put out a multipage document in detail showing exactly how to manufacture detailed and desired data.

STEVE DOOCY: — by oversampling. If you oversample certain demographics and you wind up with better results for you. 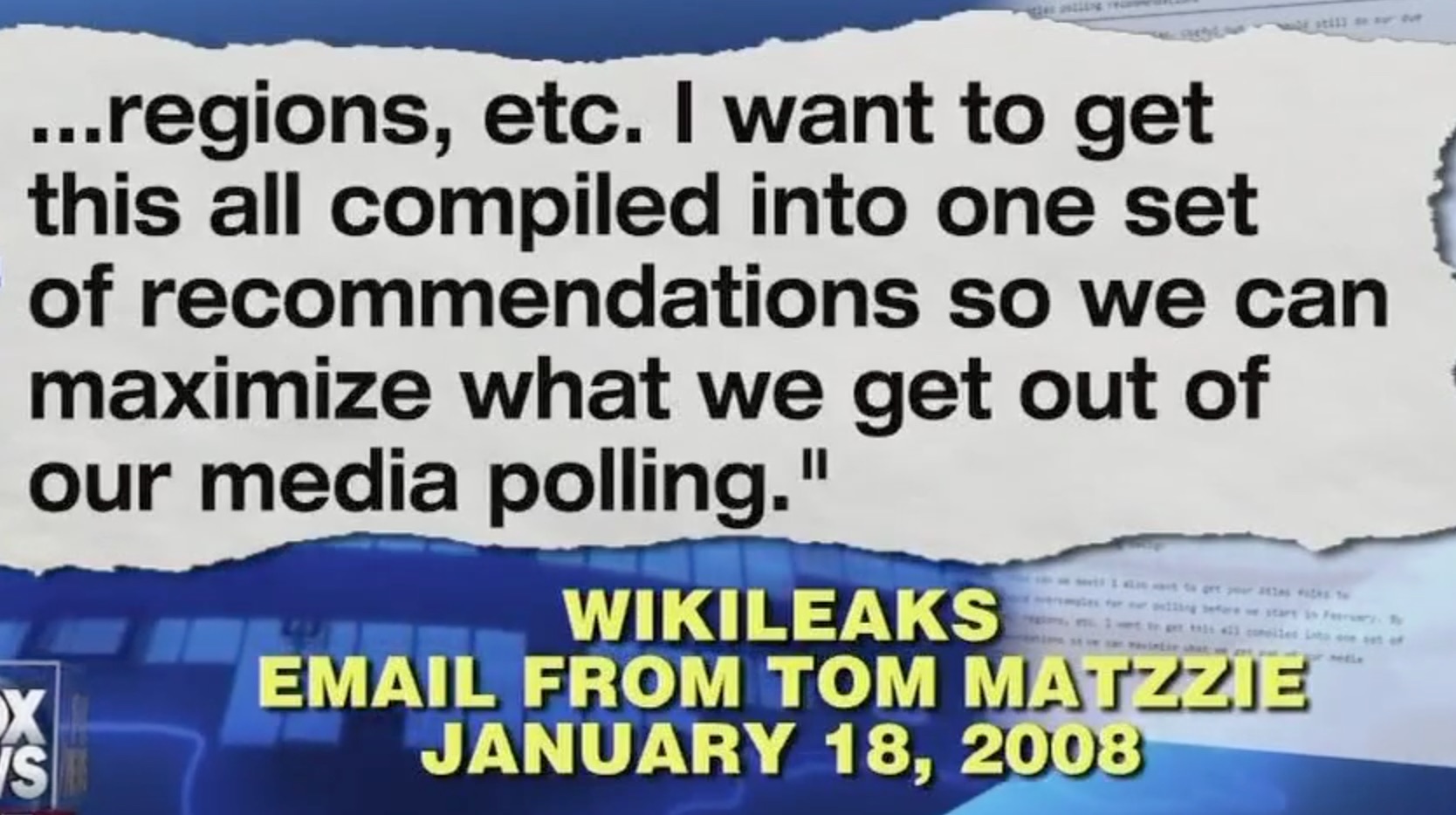 ABBY HUNTSMAN: Oh! Oh, that’s right. So this is the e-mail that came. This is from Tom Matzzie, the Democratic consultant. Here is what it says: "Hey, when can we meet? I want to get your Atlas folks to recommend oversamples for our polling before we start in February. By market, regions, etc. I want to get this all compiled into one set of recommendations so we can maximize what we get out of our media polling."

BRIAN KILMEADE: Yeah. So, I mean, people are saying, "OK, why are the polls the way they are? Why do they sample the way — where they appear to be?" And maybe they say that the Democrats want to make everybody feel like the die has been cast. If you look at the ABC poll and you believe what the ABC poll says today, it is a 12-point advantage for Hillary Clinton. Now somebody might be going, "You know, but I’m going to vote. You know my guy is not going to have a chance."

DOOCY: Sure, but if you look at the ABC poll, where it's 12 points ahead for Hillary Clinton, if you look in the fine print, they ask 9 percent more Democrats.

DOOCY: So, you know, surely there is an edge in registration for Democrats. But what they're talking about is the way you manipulate the data. For instance, this thing goes on to say in Arizona, oversampling of Hispanics and Native Americans is highly recommended. In Florida — make sure the sample's not too old — because apparently they feel that they vote Republican — has enough African-American and Hispanic voters. And on independents, when it comes to the cities of Tampa and Orlando, those are better persuasion targets than North or South Florida. So go to Tampa or Orlando first. So if you essentially bake the cake that way, you're going to wind up with better numbers.

HUNTSMAN: And you wonder why you say that her campaign is calculated? You wonder where that comes from.

KILMEADE: Everything you read is, "It's over. They're focusing on winning big and taking back the Senate."

But whereupon further review, people who don't have a horse in the race, maybe like a David Axelrod, go, "It's not over." In fact if she overplays that, it could all boomerang, and a lot of those people who were leaning, went to Obama (in 2012) could go back to Trump, where they were in August and September.

Whenever the strategies identified above are used — even oversampling, which when properly employed can be a valid polling practice — the routine standard line from pollsters about getting a "random sample" is obviously no longer true. Does that stop pollsters from claiming that their samples are random? Apparently not. If you're filling up quotas, it's not genuinely random.

There are three key items to unpack here, all of which point towards validating charges of rigged polling.

First, the point above about targeting independents in certain Florida cities to the exclusion of others, or of deliberately people who are "too old," removes all doubt about the purpose of "media polling." Chris Stirewalt at Fox, in a separate column, tried to explain away the strategies above by contending that "[l]egitimate pollsters, however, don’t weight their samples for the numbers of Republicans and Democrats. The weighting is on demographics ..." Sorry, Chris. If you're calling Tampa and Orlando because you know that independents there are more likely to lean left, you may still be "weighting ... on demographics," but you're making sure you're filling up your sample quotas with more people who lean left. If you're deliberately excluding registered or likely voters only because they're "too old," you're deliberately skewing the demographics.

Second, as to the term "persuasion targets," all one has to do is look at the Washington Post/ABC poll showing Hillary Clinton with a 12-point lead to see what's at work here.

Three of the final four candidate-specific questions in the poll — supposedly asked after a presidential preference has been obtained, but who even knows that for sure? — are about awful things Donald Trump has supposedly said or done: his "rigged election" concerns, his unwillingness to commit to accepting the outcome until the election actually takes place, and his "treatment of women." Only one relates to Hillary Clinton, and is about "her use of personal e-mail while she was Secretary of State" (not her use of a private server, not her willful destruction of government documents, not her "basket of deplorables" statement, etc.). The poll could easily have asked three questions about Hillary Clinton's damning statements or conduct, and deliberately didn't.

What is going on here at the very least is an attempt to sway people who support Trump to rethink their choice before they actually cast their ballots. What could also be happening — anyone ruling this out hasn't been in the market research trenches, as yours truly has — is that some respondents might ask if they can change their previously expressed presidential preference for Trump, or that the survey taker may even ask such respondents if they wish to change their presidential preference.

Finally, there are many polls which don't reveal the detailed makeup of those polled, and they make reverse engineering the results to figure that out all but impossible. In these cases, deliberate oversampling of key groups without weighting to fit a representative demographic mix skews the results, and will go undetected.

Naturally, none of what's in this damning e-mail and its attached detailed instructions is news at the Associated Press or the New York Times. The only attention it's getting from establishment is from a few outlets like The Atlantic which claim that there's nothing to see here. Oh yes, there is — and plenty of it.