Many writers on the left and beat journalists in the establishment press contend that Republican presidential nominee Donald Trump and running mate Mike Pence tell lies so often that it's virtually impossible to keep up with all of them.

If that's so, why, with all those "obvious" falsehoods out there, did two Los Angeles Times reporters have to label an absolutely true statement by Pence about Hillary Clinton's Syrian refugee position "misleading" and then fail, as seen in a Friday NewsBusters post, to even try to explain why it was? And why did the Associated Press's Josh Boak, as will be shown after the jump, pretend on Tuesday that Pence's absolutely true claim about the growth of the national debt under President Obama wasn't true?

Pence's statement is so obviously correct that this post would be a waste of time if it weren't for the need to expose the breathtaking ignorance exhibited by Boak (and his editors, assuming they exist) relating to the national debt and other matters.

Here is most of Boak's Tuesday item: 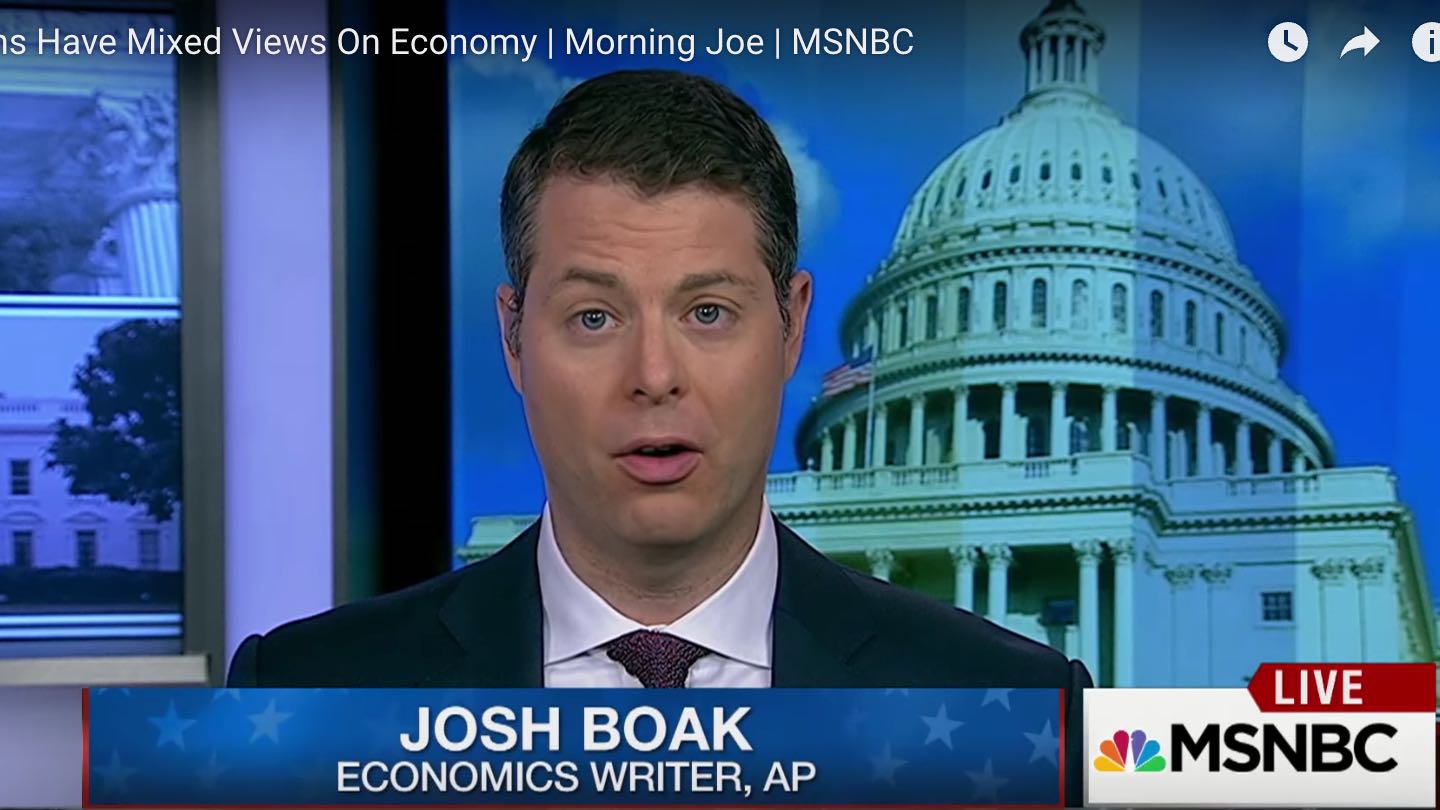 A claim from the vice presidential debate between Republican Mike Pence and Democrat Tim Kaine, and how it stacks up with the facts:

PENCE: "The fact that under this past administration, we've almost doubled the national debt is atrocious.... Hillary Clinton and Tim Kaine want more of the same."

THE FACTS: As a share of the total U.S. economy, the national debt has gone up 35 percent, not a doubling.

Still, the debt has ballooned to $19.6 trillion. This largely reflected efforts by the Obama administration to stop the Great Recession.

Boak didn't even tell readers how much the national debt has grown during Barack Obama's presidency. If he had, readers could have figured out the percentage of growth on their own, and seen for themselves how juvenile his critique is.

The official answer, taking in the period from January 20, 2009, the day Obama was first inaugurated, until September 30, 2016, the last business day for which information was available at the time of Monday's vice-presidential debate, is almost $8.95 trillion, or 84 percent:

During the next four business days through Thursday, October 6, the national debt increased by another $115 billion to $19.689 trillion, taking the total increase since Obama's inauguration to well over the $9 trillion mark. By the Obama administration's end, it will have run up more debt than the nation did from 1789 to the end of fiscal 2007.

Boak's "THE FACTS" response doesn't even respond to Pence's claim. It's almost an insult to readers (but obviously not to Boak) to have to note this, but Pence wasn't talking about the national debt "as a share of the total economy." If he was, he would have said so. Even then, given the results seen above, Boak has an odd way of rounding up figures to claim that the national debt as a percentage of Gross Domestic Product has increased by 35 percent. That could be the case by the time Obama leaves office, but those results aren't yet in.

Boak's reference to the debt-to-GDP ratio, the technical term for the national debt "as a share of the total economy," is "doubly" ironic. He should know that economists who look at debt-to-GDP, including those at the Congressional Budget Office, usually divide the "Debt Held by the Public" figure in the first column seen above by GDP to measure a government's potential exposure to the pitfalls of excessive borrowing. (Their "logic" in doing so, namely that we can exclude "Intragovernmental Holdings" because "we owe it to ourselves," is very shaky, but that's a topic for another time.) By that measure, as seen above, the national debt has increased by almost 125 percent. Thus, using the benchmark Boak himself referenced as it is commonly employed, Pence was understating the alarming increase in the nation's debt.

Now let's look at how obviously wrong it is for Boak to claim that the national debt increase "largely reflected efforts by the Obama administration to stop the Great Recession." Boak's formulation is a less juvenile way of saying, "Darn it, the Obama administration simply had to run up the debt by so much to save the economy from his awful predecessor George W. Bush."

It doesn't even help Boak much if one extends when the Great Recession "stopped" to February of 2010 to account for the fact that the economy, thanks to a Keynesian "stimulus" package which stimulated nothing except prolonged misery, continued to lose jobs until then. At the end of February 2010, the national debt stood at $12.440 trillion, or $1.814 billion greater than when Obama took office. That's barely 20 percent of the $$8.947 trillion increase thus far during the Obama administration.

The national debt has not increased "largely" because of "efforts ... to stop the Great Recession." It has increased primarily because the Obama administration used the ineffective 2009 "stimulus" package as a means to permanently ramp up government spending in virtually every category except the military. The subsequent ramp-up has been so large that it has dwarfed all-time record tax collections. The Congressional Budget Office's most recent Monthly Budget Review estimates that spending during the fiscal year which ended on September 30 was $3.856 trillion, and that receipts amounted to $3.268 trillion. Both are all-time records, and leaving an estimated deficit of $588 billion.

But that's not all. Reported deficits during the Obama administration of roughly $6.95 trillion account for less than 80 percent of the increase in the national debt during its tenure. The remainder of the buildup has occurred because of "supplemental appropriations" and "off-budget" government programs whose net spending and additional borrowing add to the debt but are not included in reported annual deficits.

If Pence and Trump lie so routinely and so often, why did the AP and Boak — who has taken to making occasional appearances on MSNBC — have to create such a ridiculous, ignorant and mendacious "fact-check"?

With so many alleged falsehoods out there, you would expect the press not to have to waste its time mislabeling statements which are obviously utterly true.

Maybe the number of genuine Trump-Pence falsehoods isn't all that large after all — especially in comparison to their Democratic Party opponents, whose presidential nominee, tagged a "congenital liar" in 1996 by William Safire at the New York Times, has spent the past 20 years confirming his assessment on a nearly daily basis.