Tuesday's coverage at the Associated Press of the deepening humanitarian crisis in the Bolivarian socialist disaster known as Venezuela focused on the conditions in the ever-lengthening lines its citizens must endure in hopes of obtaining enough of the basics of everyday life just to survive.

Wire service reports often start off relatively brief and expand as reporters gather more information. That didn't happen with the AP's three Tuesday reports. Instead, Hannah Dreier's opening 11:51 a.m. Eastern Time dispatch was lengthy, with many compelling emotional and economic details. The second version of her report over an hour later was almost cut in half, and lost most of its power as a result. A final unbylined story at 3:39 p.m. — the one which most of AP's subscribers appear to have decided to carry — contained only 10 paragraphs, and even failed to note that the country whose people are now spending an average of 35 hours a week in line, and where 90 percent are saying they "can't buy enough to eat," is socialist.

(Note: Links are to versions of the story saved for future reference, fair use and discussion purposes.)

Dreier's first story, which weighed in at over 1,600 words, portrayed a nation where the economy has almost completely ceased functioning. Many of those key details disappeared from her 875-word second report, as well as a few heartbreaking stories of despair. Beause of limits on what can professionally be excerpted, what follows concentrates on the overall economy, including but still not limited to the following full paragraphs which were either eliminated or, in one case, significantly watered down (bolds are mine):

Venezuela's vast oil wealth once fueled a bustling economy. But years of mismanagement under a socialist government ground much of the nation's production to a halt, and the country grew ever more dependent on imports.

(Note: Dreier's second story was revised to say, "But years of mismanagement under a socialist government disrupted much of the nation's production ..." — Ed.) 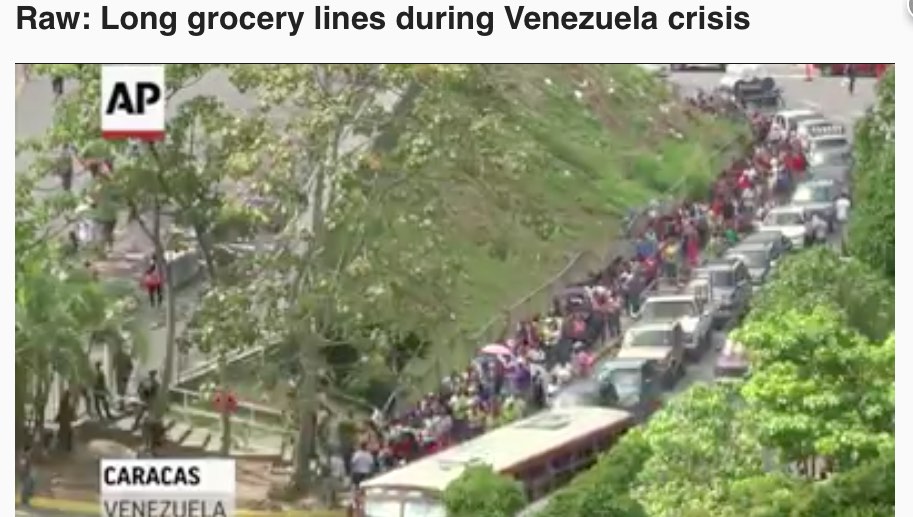 The supply chain broke down - first slowly, then all at once, as a steep drop in the price of oil left no money to pay for even some of the most basic necessities.

... The need is everywhere.

On Wednesdays, residents of one of Caracas' wealthiest neighborhoods line up with empty five-gallon jugs, hoping to catch a truck that comes through weekly with potable water. Poorer people wait at the foot of the green mountain that towers over the city, competing to siphon water from its springs.

... All Venezuelans, including children, are assigned two shopping days a week based on their state ID number. They line up before supermarkets open, guided by rumors and where they've had luck in the past. Some use fake IDs to score extra shopping days. Pregnant women and the elderly get their own priority lines, and everyone is limited to two units of whatever is on offer.

... The lines are driven by scarcity and poverty, but they also reflect how much people have given up on traditional employment. With the minimum wage at less than $15 a month and inflation running well into triple digits, it barely pays to go to work. It makes more economic sense to fill one's pantry, and then sell or barter anything not vitally needed.

So fields lie fallow while farmers spend their days waiting to buy imported goods. Teachers walk out of classrooms to search for food they can eat or resell. Government offices close in the early afternoon because officials need to go shopping, too.

"Most of these people make more money doing this than their other jobs," said David Smilde, a Venezuela expert at the Washington Office on Latin America.

As a result of the above deletions, the one cited revision, and the elimination or truncation of several stories of suffering, Dreier's shorter story really doesn't adequately communicate the country's utter desperation — economically or emotionally.

If "the wealthy" are lining up just to get potable water, they may have nice-looking houses, but they must not be genuinely "wealthy" any more, at least as most people in the U.S. would understand the term. Managing household goods like a low-tech Ebay now makes more sense than working. So people aren't working, and the production of goods and services is being stopped dead in its tracks. Under Nicolas Maduro, whose name did not appear in any of the three AP reports, Venezuela is well on its way to making everyone equal — equally miserable.

The 3:39 p.m. final version of AP's coverage is a brief 300-word item headlined as "AP PHOTOS: VENEZUELANS LIVING LIFE ON THE LINE." That's more than a little odd, given that the story has only one accompanying photo — and none at the story as it's carried at the web site of the New York Times. The Times story only has a link to AP photographers' Twitter page — which has no photos (thumbnails of the photographers themselves don't count).

As would unfortunately be expected, the paragraph in the excerpt above containing the one original reference to the country's "socialist government" was among many which didn't survive the final cut from Dreier's second report.