Skepticism Justified When It Comes to WashPost Trump Headline

Trump took special umbrage to the following headline at Jenna Johnson's coverage of Trump's reactions to the terrorist massacre in Orlando: "Donald Trump suggests President Obama was involved with Orlando shooting." The Post, claiming it did so before Trump made his move, is now carrying this revised headline: "Donald Trump seems to connect President Obama to Orlando shooting." The trouble is, Johnson's content, which deliberately injected scurrilous meaning which was not present into Trump's comments, still contains the contention made in the earlier headline.

What Trump said indicates that he is as mystified and outraged as millions of other Americans are as to why President Barack Obama won't identify Orlando mass murderer Omar Mateen's specifically stated Islamic radical motivations — and why Obama and his party insist on treating a terrorist massacre as an excuse for pushing more gun control measures which would not have prevented the carnage.

To the expert-at-mind-reading Johnson (that's sarcasm, folks), this really means that Trump thinks Obama is "identifying with radicalized Muslims" to the point of being "complicit" in Sunday's attack (bolds are mine throughout this post):

Donald Trump seemed to repeatedly accuse President Obama on Monday of identifying with radicalized Muslims who have carried out terrorist attacks in the United States and being complicit in the mass shooting at a gay nightclub in Orlando over the weekend, the worst the country has ever seen. 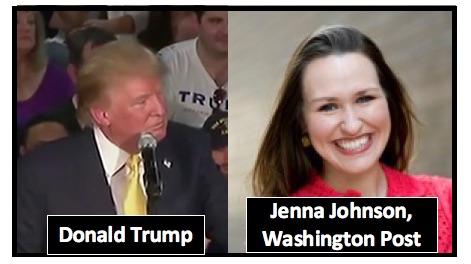 "Look, we're led by a man that either is not tough, not smart, or he's got something else in mind," Trump said in a lengthy interview on Fox News early Monday morning. "And the something else in mind — you know, people can't believe it. People cannot, they cannot believe that President Obama is acting the way he acts and can't even mention the words 'radical Islamic terrorism.' There's something going on. It's inconceivable. There's something going on."

We could go on and on with Johnson's nonsense, but the single definition of "complicit" at dictionary.com is far more than enough to make the point that the Post hasn't accomplished anything by changing its headline:

complicit [kuh m-plis-it]; adjective — choosing to be involved in an illegal or questionable act, especially with others; having complicity.

It is therefore beyond dispute that Johnson wrote that Trump "seemed to" say that Obama was "involved" in Omar Mateen's massacre of 49 people.

It's quite a stretch to believe that any reasonable person could interpret Trump's remarks as Johnson did by using the word "complicit." As such, what she wrote would, to use her weasel words, "seem to" be libel ("defamation by written or printed words, pictures, or in any form other than by spoken words or gestures"). Whether it's actionable in the legal system is a separate matter.

Donald Trump said Monday that he is "revoking" the Washington Post's press access at his campaign events, calling the newspaper "phony and dishonest."

In a Facebook post, the presumptive GOP nominee attributed the decision to the newspaper's "incredibly inaccurate coverage" of him.

"Donald Trump's decision to revoke The Washington Post's press credentials is nothing less than a repudiation of the role of a free and independent press. When coverage doesn't correspond to what the candidate wants it to be, then a news organization is banished. The Post will continue to cover Donald Trump as it has all along -- honorably, honestly, accurately, energetically, and unflinchingly. We're proud of our coverage, and we're going to keep at it."

Monday's announcement was an astonishing move by the Trump campaign, given the Post's status as one of the most respected newsrooms in the United States.

But it follows a pattern. Trump has repeatedly refused to give press credentials to major news outlets when he disagrees with coverage decisions.

... "I am no fan of President Obama, but to show you how dishonest the phony Washington Post is, they wrote, 'Donald Trump suggests President Obama was involved with Orlando shooting' as their headline," Trump wrote. "Sad!"

One could argue that Donald Trump has in certain instances been too quick to take credentials away from other news outlets. It's impossible to argue that this is one of them. Anyone with an ounce of self-respect wouldn't allow unfettered access to a bunch of people who want their readers to believe that you think President Obama was complicit in a terrorist massacre.

The assertion by CNNMoney writers Tom Kludt and Brian Stelter that the Post is "one of the most respected newsrooms in the United States" is now a sick joke. Trump's candidacy, whatever its merits, has sent its journalists and columnists into a fit of collective hysteria which would deeply embarrass the Graham family, the paper's former longtime owners. They at least knew that if you're going to be agenda-driven, as the Post has been for least the past 50 years, you at least need to have some facts on your side.