On Tuesday at TheFederalist.com, 2015 Noel Sheppard Blogger of the Year recipient Mollie Hemingway pointed to several outrageous examples of poor press coverage of the Supreme Court's unanimous move to send Obamacare's HHS contraception mandate case back to the lower courts.

Hemingway's core observation was that usually plaintiff-sympathetic establishment press outlets "suddenly have trouble even naming the Little Sisters of the Poor" until their stories' very late paragraphs. She even found that Adam Liptak's story at the New York Times, one of the establishment press's two primary gatekeepers, failed to mention the Little Sisters at all in a 1,283-word report. One item she did not cite was at the Associated Press, the other primary gatekeeper, where the coverage was in some respects even worse.

Liptak's "thou shalt not reveal the plaintiffs' names" commandment at the Times even extended to his report's accompanying photos, one of which only described the pictured Little Sisters as "nuns":

I guess we should be relieved that the Times didn't describe the Little Sisters as "weird women wearing religious habits."

The content of Liptak's report only identified the plaintiffs as "religious groups" in five instances, and that they "included hospitals and schools" in another. The story did not ever name a specific plaintiff.

For all its shortcomings, Liptak's coverage at least clearly acknowledged two pertinent facts:

Readers of Mark Sherman's coverage at the Associated Press on the day of the Court's move would find the first of those two facts very elusive. Sherman cryptically referred to "Obama's health care law" just once, and never named the Affordable Care Act.

Sherman played journalistic dodgeball in his opening paragraphs, only to directly contradict himself later (bolds are mine): 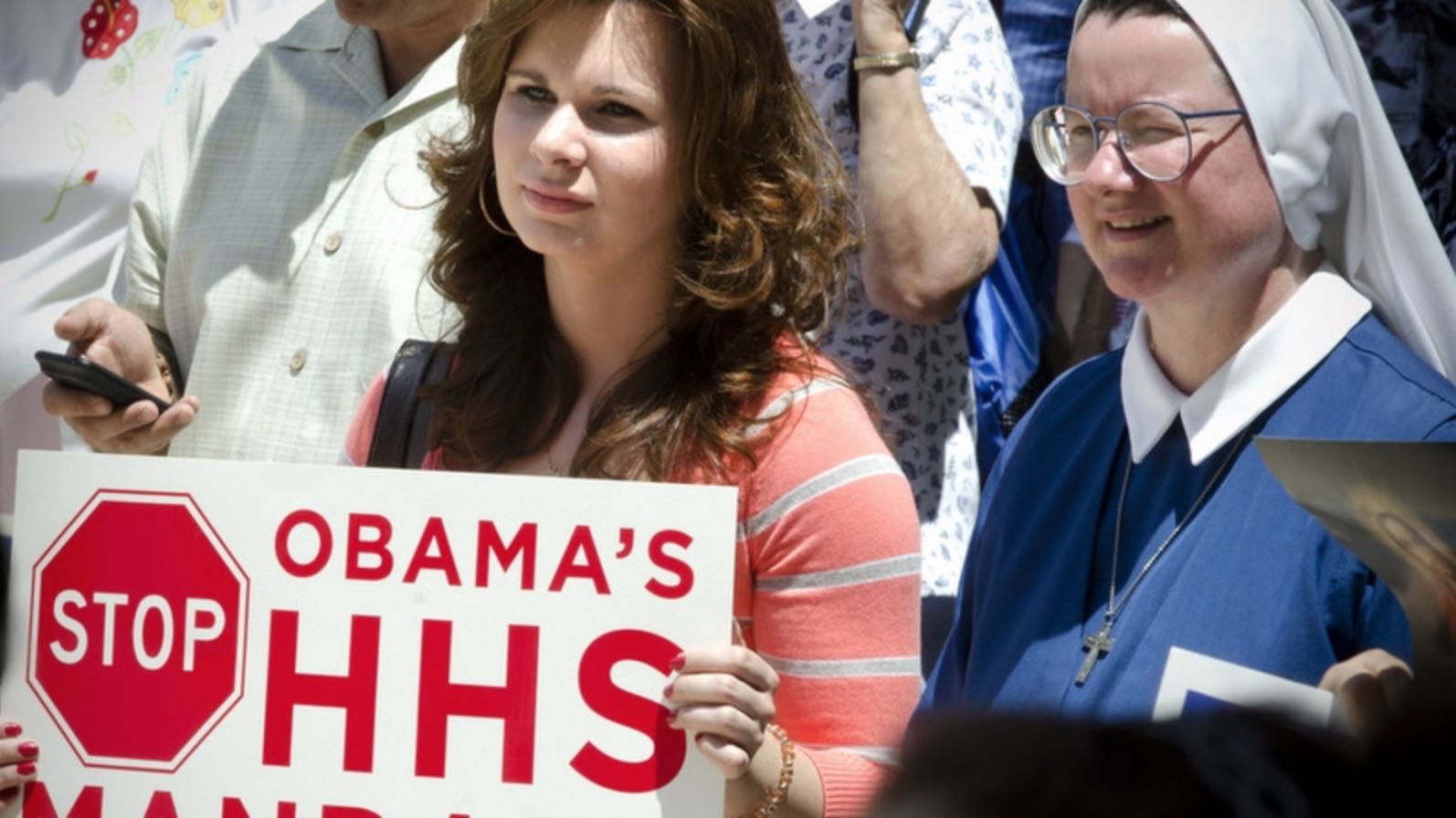 A short-handed Supreme Court dodged but kept alive a legal challenge Monday from faith-based groups over the Obama administration's rules for cost-free access to birth control. It was the latest sign of justices struggling to find a majority for cases taken up before Justice Antonin Scalia's death.

The unsigned, unanimous opinion paved a way out of a politically thorny dispute for the eight-member court, which has split twice in 4-4 ties since the conservative jurist's death in February. Yet it hardly settled the matter, even if President Barack Obama said the "practical effect is right now that women will still continue to be able to get contraception."

Deciding nothing but perhaps buying time, the justices asked lower courts to take another look at the issue in search of a compromise. The case concerns the administration's arrangement for sparing faith-based groups from paying the birth control costs of women covered under their health plans.

"The court expresses no view on the merits of the cases," the justices wrote, ending a major confrontation over Obama's health care law with a whimper. The matter almost certainly will not return to the Supreme Court before the 2016 presidential election, and perhaps not until a new justice is confirmed to take Scalia's seat, if at all.

As noted earlier, the Court went far beyond "deciding nothing," vacating all previous lower-court rulings. Sherman, perhaps hoping that readers wouldn't get that far, completely reversed himself in Paragraph 15 when he wrote: "The justices threw out all those rulings Monday."

The AP reporter apparently also hoped that readers wouldn't get to his Paragraph 17, where he finally named the plaintiffs:

In Monday's case, groups invoked the same law. The challengers included Bishop David Zubik, head of the Catholic Diocese in Pittsburgh; the Little Sisters of the Poor, nuns who run more than two dozen nursing homes for impoverished seniors; evangelical and Catholic colleges in Oklahoma, Pennsylvania, Texas and Washington, D.C.; and the anti-abortion advocacy group Priests for Life.

The Little Sisters is an international organization which operates in "over 30 countries around the world," but Sherman apparently wasn't interested in making them look as important or as noble as they really are.

In an unusual move, Sherman's story, though it's still located at the AP's relatively difficult to search "Big Story" site, is no longer present at the AP's main national site.

There is no meaningful doubt, given the evidence she presented and the AP item covered in this post, that Hemingway is right when she contends that the "Media Want To Make Sure You Never Hear About ‘The Little Sisters Of The Poor.’"

Now let's explain why her assertion is correct by going to the opening, cut-to-the-chase paragraph of the Wall Street Journal's house editorial on the Court's move Monday evening:

Sisters Act Two: Back in the Habit
The Court offers Obama a chance for compromise on religious liberty.

The Supreme Court devised an unusual legal halfway house on Monday that may finally resolve the saga of the Little Sisters of the Poor and their challenge to ObamaCare’s birth-control mandate. The question now is whether the Obama Administration will accept this invitation for a compromise that respects free religious exercise, or continue to force believers to submit to government.

Though hope springs eternal, Barack Obama and his administration have spent the better part of four years using the HHS mandate as a club to try "to force believers to submit to government" — just as it has used levers such as federal funding and regulatory harassment to force submission to the government in other arenas. There's very little reason to believe it is going to let up any time before January 20, 2017.

This is where the establishment press's most fundamental failure comes into play. Its treatment of the Court's move this week shows beyond doubt that if a bullying leftist and his regulators occupy the halls of power and the bureaucracy, journalists, particularly those at the nation's two primary gatekeepers, will, completely contrary to the expectations of our Founders when they wrote the First Amendment, almost invariably side with — and thus enable and encourage — the bullies.