State Department spokesman John Kirby did a fist-pounding imitation of Baghdad Bob at a press conference today on the Obama administration's decision "to send 250 more troops to Syria."

Note that the Associated Press report by Kathleen Hennessey linked in the first paragraph refers to "troops," not "advisers" or "trainers." This is important, because that AP report acknowledges that in everyday parlance, the additional forces involved are "boots on the ground." The AP's Matt Lee, one of the few genuine journalists at the wire service, had to endure hearing Kirby say that the administration wasn't changing course or breaking a previous promise. Lee didn't take it well, nor should he have (HT Washington Free Beacon): 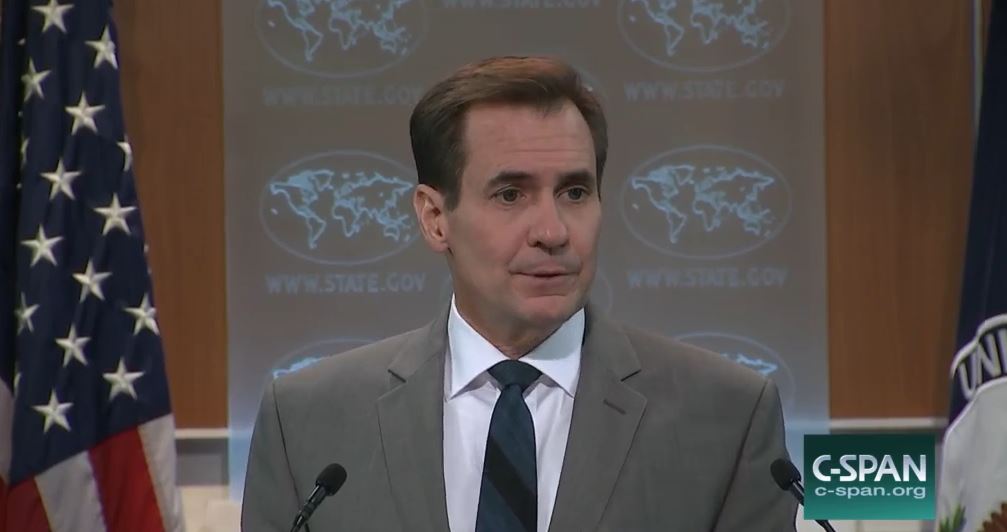 MATT LEE, ASSOCIATED PRESS: The point is for months and months and months, the mantra from the president and everyone else in the administration has been "no boots on the ground," and now –

JOHN KIRBY: No, that is not true.

LEE: Okay, your predecessor up here, you know, it was, "All options are on the table except boots on the ground." That was it. That was it.

KIRBY: I never said that, and -

LEE: Well, that was the full line from the President on down. Anyway, anyway, are you saying that this is not the same thing as saying one thing and then doing the other completely?”

Kirby's contention is nonsense, and trashes whatever one believes is left of the Obama administration's credibility. Both President Obama and Secretary of State John Kerry have previously said that there would be no "boots on the ground" (their words) in Syria.

John Kerry said that there was no plan involving "boots on the ground," even though he wanted to keep that option open in a congressional war resolution:

What about "I will not put American boots on the ground in Syria" did we not understand?

Though I only heard one person laughing at the end of the Lee-Kirby exchange, Twitchy claims that reporters "laugh(ed) at State Department spokesman John Kirby Monday afternoon."

I suspect many readers here would have walked out in absolute disgust.

If this exchange had occurred during a Republican or conservative administration, it would be leading the Big Three networks' nightly and morning broadcasts for the next 36-48 hours.