Two weeks ago, yours truly posted on a very inadequate March 26 U.S.-distributed Associated Press story out of Glasgow the previous day (since expired) about the murder of Asad Shah. Despite the fact that far more information was known at the time, the wire service would only acknowledge that "the killing of a Muslim shopkeeper who wished Christians a happy Easter is being investigated as 'religiously prejudiced,'" and (four paragrahs in) that "The suspect, who police say is Muslim, has not been identified or charged." AP has not done a follow-up story, even though far more beyond what it failed to originally report is now known.

In a Washington Post "WorldViews" blog post on Friday, Max Bearak attempted to bring readers up to date, in the process exposing — but from all appearances acquiescing to — Orwellian attempts by the dominant Muslim community to disavow their religion's association with Shah's murder and to distance themselves from their hostility towards other faiths (bolds are mine):

Last month, after being offended by a tweet, Tanweer Ahmed traveled 200 miles in an Uber car from Bradford, in England, to Glasgow, in Scotland. The seemingly innocuous, even heartfelt tweet was written by Asad Shah, and wished his adopted countrymen a happy Easter.

Ahmed waited for 40-year-old Shah to leave the convenience store in Glasgow where he worked, then stabbed him 30 times, stamped on his head, and sat on his chest while Shah lay unconscious, authorities allege. Shah died of his wounds later that night.

The hatred that Ahmed, 32, apparently felt for Shah wasn't because of his kind words about Christians, but because Shah was a member of the small and long-persecuted sect of Muslims called the Ahmadiyya.

Oh, come on. This is really more than we should have to endure.

If Ahmed was only motivated to go after any Ahmadiyya member because of his hatred of the sect, he could have done so on any day, at any time, while saving himself 200 miles of driving. That's because Bradford itself has two Ahmadiyya mosques.

Of course it was Shah's post with its "kind words about Christians" which sent Ahmed into a rage intense enough to "drive" him to travel 200 miles to carry out his deadly deed. Now we're supposed to believe Shah's "kind words" were irrelevant. For heaven's sake, how dumb does Max Bearak and the Washington Post think its readers are?

Continuing, for those who can stand it (links are in original):

This week, leaflets have been found in universities, mosques and shopping centers across London advocating that each Ahmadiyya be given three days to "get back into the Islamic fold. If he does not, he will be awarded capital punishment." 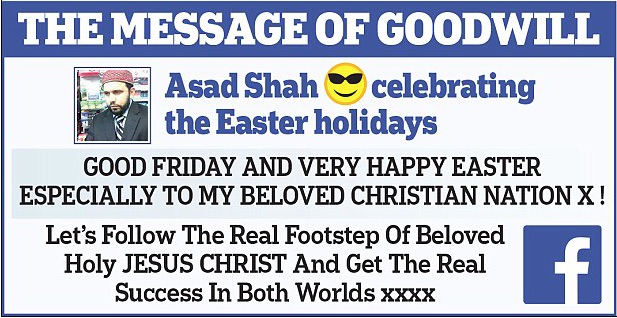 ... Leaflets like these have been distributed before, according to leaders of Britain's Ahmadiyya community, but after Shah's slaying, they have added to a growing sense of unease in a country many have found to be an asylum.  This new iteration, obtained by IBTimes UK, says Ahmadiyyas are "worse than apostates" because they present themselves as Muslims. The leaflets were made by an organization called Khatm-e-Nubuwwat, which means "Finality of Prophethood" in Arabic.

In a recent column reacting to Shah's killing, British anti-extremism activist Maajid Nawaz writes that intolerance of the Ahmadiyya is on the rise there, and much of it tied to anti-blasphemy fervor in Pakistan.

... In an example provided by Nawaz, the Ahmadiyya community took out a two-page ad in the British newspaper Luton on Sunday to celebrate the 125th anniversary of their existence, but the paper was so overwhelmed by complaints from the majority Sunni Muslim community that it had to issue this mealy-mouthed response, which Nawaz tweeted:

In a deposition given by Tanweer Ahmed this week, he admitted to killing Asad Shah, employing much of the same rhetoric as the leaflets. Saying Shah "disrespected" Islam and "claimed to be a prophet," he went on to assure the court that the attack had "nothing at all to do with Christianity or any religious beliefs." Police have charged him with "religiously prejudiced" murder.

As I noted in my March 27 post (links are in original):

... (As to) the matter of Asad Shah's faith: "Mr Shah’s family, originally from Pakistan, are members of the Ahmadiyya Islamic sect, which preaches ‘love for all, hatred for none’, but is seen as sacrilegious by orthodox Muslims." Family members now fear they will be Islamic murderers' next targets.

It's estimated that the Ahmadiyya population is "at least 10 to 20 million worldwide, thereby representing around 1% of the world's Muslim population."

The UK Daily Record, in a story which appeared after AP's report, quotes a source who says that "The hardline Sunni Muslims call Ahmadiyya Muslims kafir. They say they are non-believers."

87 percent to 90 percent of all Muslims, or about 1.5 billion people, are Sunnis. Additionally, "the majority of modern Muslim scholars continue to hold the traditional view that the death penalty for apostasy is required."

The insistence by those, including Asad Shah's murderer, who are now claiming that Shah's death had "nothing at all to do with Christianity or any religious beliefs," is misdirection at its most reprehensible.

The reason Shah was murdered is because his sect wishes to "to revive the forgotten Islamic values of peace, forgiveness and sympathy for all mankind, and to establish peace in the world through the teachings of Islam." Any genuine attempt at rapprochement with members of other religions is heresy to "the majority of modern Muslim scholars," and anyone claiming to be a Muslim involved in attempting such a rapprochement must die. As we have seen not only with ISIS but also in certain other Islam-dominated areas, Christians and members of other religions are often ordered to convert to Islam or die.

Max Bearak at the Washington Post, and the Associated Press by its silence in failing to follow up on its original pathetic story, have demonstrated a fierce determination to make sure their U.S. audiences don't have to face the ugly reality that strict adherence to Islam dictates jihad.