2016 GOP presidential candidate and former Texas Governor Rick Perry is fighting a legal battle against an out-of-control Lone Star State county. That county's prosecutor has sued Perry, claiming that a) he committed an illegal act of "coercion" by threatening to veto legislation funding a "public integrity" office headed by Travis County's Rosemary Lehmberg, who was convicted of drunk driving in 2013 but refused to resign; and b) that he committed another illegal act by carrying out his veto promise. In effect, the County wants to criminalize Perry's exercise of his then-gubernatorial duties.

A Texas Court threw out the "coercion" contention on Friday. The Associated Press's Will Weissert was clearly quite displeased.

Weissert has demonstrated consistent hostility towards Perry in recent years while somehow retaining employment as an allegedly objective journalist. On Friday, he whined about Team Perry's lawyers doing all they can to defend him — twice — while making sure readers know that the politician he so despises is not catching on very well as a candidate for the GOP nomination.

Here's the first example from an item carried at Time.com (bolds are mine throughout this post): 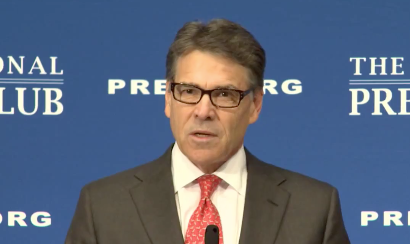 One of two felony indictments against former Texas Gov. Rick Perry was tossed out Friday, giving the Republican presidential candidate a potentially huge legal victory in the face of flagging polling numbers for the 2016 race.

The 3rd Court of Appeals in Austin sided Friday with Perry’s high-powered legal team in ruling that the charge of coercion of a public servant essentially constituted a violation of Perry’s free speech rights.

Perry was indicted last August on the coercion charge and a separate charge of abuse of official power, which wasn’t affected by the ruling. It’s still likely he’ll have to face that charge.

The case stems from Perry publicly threatening, and then exercising, a veto of state funding for public corruption prosecutors. His move came in the wake of the Democrat who heads the investigative unit rebuffing Perry’s calls to resign after she was convicted and jailed for drunken driving.

Michael McCrum, the San Antonio-based special prosecutor leading the case, did not immediately return a call seeking comment. He will likely have the option of further appealing Friday’s decision.

Lead Perry counsel Tony Buzbee called the decision “a clear step towards victory for the rule of law.”

Note that Weissert did not name the "Democrat who heads the investigative unit." Again, it's Rosemary Lehmberg.

Perhaps the AP reporter failed to name Lehmberg to make it less likely that readers will go to video links showing how stinking drunk she was (blood alcohol level: 0.23), and how belligerently she behaved when she was booked.

The second example is at the AP's main national site, and at least got around to naming Lehmberg in Paragraph 7:

One of two felony indictments against former Texas Gov. Rick Perry was tossed out Friday, giving the Republican presidential candidate a potentially huge legal victory in the face of flagging polling numbers for the 2016 race.

The 3rd Court of Appeals in Austin sided with Perry's pricy legal team, stating in a 96-page ruling that the charge of coercion of a public servant constituted a violation of the former governor's free speech rights.

Perry, who left office in January, was indicted last August on the coercion charge and a separate charge of abuse of official power, which wasn't affected by the ruling.

For now, he'll still have to face the abuse of power charge - which could tie him up in court and eat into valuable on-the-ground campaigning time in the midst of his White House run. But Perry's lead attorney, Tony Buzbee, downplayed the future significance of the case, just as his client has for months, saying it will have "no impact whatsoever" on the campaign.

"One down, one to go," Buzbee said at a Houston news conference. "The court today threw out what we believe to be the greater of the two charges." He added that the abuse of power charge is "hanging by a thread."

Perry has spent more than $2 million on top defense lawyers - even though his 2016 campaign has raised barely half that much. Despite numerous visits to key early states like Iowa and New Hampshire, polls show Perry badly trailing in a crowded field.

So I guess Weissert would prefer that Perry just put the gloves down and declare, "No mas; where's my jail cell?"

Too bad, so sad, pal — and while you're crying crocodile tears about Perry's legal expenditures, remember that one county government is wasting taxpayer resources in a legal effort which is overwhelmingly likely to fail, and whose only real purpose is to try to distract and derail Perry's presidential candidacy.

Weissert has been proactively on the attack against Perry's expected and then declared presidential candidacy for two years.

In July 2013 (covered here and here at NewsBusters), as Perry announced that he would not seek an additional term as Lone Star State governor, Weissert authored two especially execrable items:

Paraphrasing a question I asked two years ago: If Perry is such a national joke, why was he so successful as a company and job recruiter while he was governor, convincing all kinds of firms to leave mostly blue states to relocate in Texas?

Two years on, here's a more current and obvious question everyone who sees and talks to him needs to ask Will Weissert: Why are you so obviously obsessed with tearing Rick Perry down?

Eugene Volokh at the Washington Post's Volokh Conspiracy blog has dissected the claims against Perry in two marvelous posts (here and here). The Cliff's summary: Both are dangerous attempts to intrude on the perogatives of representative government.