At NYT, 2,500-Word Report Labors Mightily to Portray Murderer of Two NYPD Cops As a Victim

[EDITOR'S NOTE: A link and a seeming endorsement of the white-nationalist site American Renaissance has been removed. NewsBusters does not associate with known white nationalists.]

In the interest of getting all supposedly relevant information out there for the public to see, the New York Times amassed an extraordinary array of journalistic resources — three reporters, three who "contributed reporting," and two others who "contributed research" — to what they must have thought was an important, underappreciated element of the saga which ended with the brutal ambush murders of NYPD Officers Rafael Ramos and Wenjian Liu in December.

The three reporters — Kim Barker, Mosi Secret and Richard Fausset — composed roughly 2,500 words as a result of that eight-person effort. Their resulting work was posted online on Friday and appeared on the front page of the paper's January 3 New York Region and National print editions (above the fold, top right). Their mission was to sympathetically portray cop-killer Ismaaiyl Brinsley, which was bad enough. But their ultimate objective, which I'm sure was achieved in the minds of many fever-swamp liberals (example here), was to convince readers that the link between Al Sharpton and his "we want dead cops" crowd and Brinsley's motivations was not all that direct, i.e., that "Brinsley’s short life and violent end is probably less political and more accidental than initially portrayed." The rest of us will find their attempt troubling, but utterly unpersuasive in that regard.

Here are excerpts from the trio's report, one on which Thomas Lifson at American Thinker appropriately hung a "barf alert!":

... Mr. Brinsley’s short life was a series of disappointments. 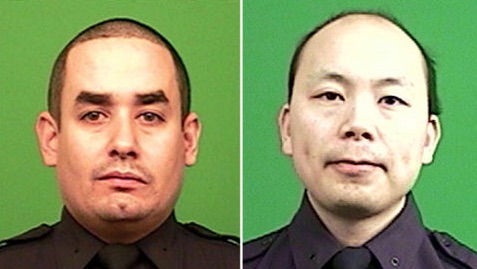 He was the difficult teenager who was passed around from home to home, the adult who could make nothing work, not a T-shirt company, not even an attempt on his own life at a former girlfriend’s house.

Everyone seemed to betray him. The friends who pistol-whipped and robbed him in May. The girlfriend who dumped him around Thanksgiving.

In recent weeks, Mr. Brinsley was unraveling, increasingly desperate, the gap between the life he wanted at age 28 and the life he had looming ever larger. If he couldn’t get it together, he told the mother of his second child in early December, he would kill himself.

The obvious undercurrent: He was a victim. It's not his fault.

The truth of Mr. Brinsley’s short life and violent end is probably less political and more accidental than initially portrayed, friends and his mother said. He was no ardent anti-police activist, as some of his friends were. He was nursing no grudge against the police in Brooklyn. He was no stone-cold criminal; his 20 arrests were mostly for minor crimes, even though they prevented him again and again from getting a job.

He struggled with depression but had no history of hallucinations or other forms of psychosis, unlike his oldest brother, who battled schizophrenia. His version of Islam seemed more jumbled than jihadi. Instead, Mr. Brinsley seemed to be a grandstander at the end of his tether, homeless, jobless and hopeless.

Twenty arrests, "mostly" for minor crimes. Don't most people end up with 20 arrests by age 28? The mind reels.

Here's most of the Times trio's final paragraph:

... he came for two police officers he had never met, in a city where he didn’t live, at the end of a life that never measured up. He posted his intentions on Instagram. Pay attention to me, he seemed to shout, even telling two young men he met in Bedford-Stuyvesant to follow him on Instagram and to watch what he did next, just before he shot two strangers.

Nothing will change the fact that Ismaaiyl Brinsley specifically cited the deaths of Michael Brown and Eric Garner as his motivation. The Times's massive and transparent effort to water down that inconvenient truth is disgraceful, and unfortunately consistent with the mentality it has displayed during the past several weeks in this and related matters.