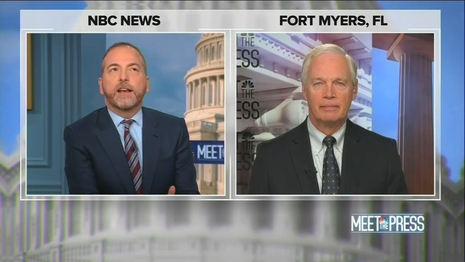 It's truly puzzling. Why does Meet the Press host Chuck Todd keep inviting on Senator Ron Johnson, attacking him, and then getting angry Johnson bites back about bias? When Todd patronized Johnson by saying "I'll take your word that you're ethically bothered by Hunter Biden." Johnson asked Todd why he's not bothered.

Why would Chuck think anyone would believe him when he claims "I'm a journalist, I have to deal in facts!" And "I have skepticism of both parties."

That is not his record. Even on this show, he was abusive to Johnson, and then very accommodating to Sen. Debbie Stabenow (D-Michigan).

We had an eye-roll moment where Chuck Todd lectured Senator: "Hold on, let me stop you there. Potential [crimes]. This is -- Senator, potential is innuendo." Did Chuck sleep through the Trump years, when everyone on MSNBC predicted "the walls are closing in" and Trump was going to jail? They were the Innuendo News Network.