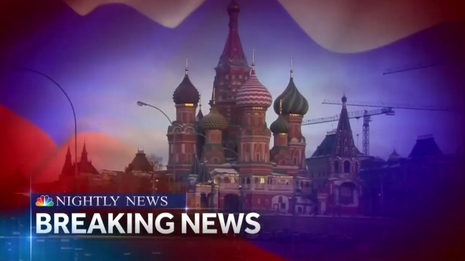 When the “breaking news” on the phantom of Russian collusion breaks now, does anyone notice? Blink and you’ll miss The Washington Post report on “A study finds minimal impact from Russian influence operations on Twitter in the Trump-Clinton presidential race.”

If there’s anything that the left-wing media pounded into everyone’s brains for most of Donald Trump’s presidency is that “Russian interference” was the unquestionable cause of Trump somehow squeezing out a victory despite a massive media bombing campaign in 2016. If only the American people had gone unmolested by Russian bots, President Hillary Clinton could have made glorious radical-feminist history.

But now a new study in the journal Nature Communications by six authors reported “exposure to Russian disinformation accounts was heavily concentrated: only one percent of users accounted for 70 percent of exposures.” Also, Putin’s bots were “eclipsed by content from domestic news media and politicians.” During the final month of the campaign, an average user was potentially exposed to four posts per day by Russian bots, compared with 106 by national news sites and 35 by politicians.

Giggle at the notion that four Russian bot posts can easily out-influence 106 posts by our nattering nabobs of the national media. “My personal sense coming out of this is that this got way overhyped,” announced Josh Tucker, one of the report’s authors. No kidding!

But it gets funnier. They found “highly partisan Republicans were exposed to nine times more posts than non-Republicans.” In other words, people who were already predisposed to vote for Trump and against Mrs. Clinton were not exactly the crucial constituency to sway in a close race.

In the end, the authors found “no evidence of a meaningful relationship between exposure to the Russian foreign influence campaign and changes in attitudes, polarization, or voting behavior.”

This finding echoes a 2019 review by Science magazine found that just one percent of Twitter users were exposed to 80 percent of the misinformation present, and these tended to be older, extremely partisan users – people who were already voting for Trump. You could dislike the info-diet of these voters, but they weren’t “persuadables.”

Every horror-movie scenario was trotted out in 2016 to dissuade the swing voters away from Trump. CBS contributor Nancy Giles played doctor and pronounced him "clinically insane.” Then-public radio host Bob Garfield suggested Trump exuded “a nuclear recklessness, reminiscent of a raving meth head with a machete on an episode of Cops.” Slate editor Jacob Weisberg spoke for the press when he said a Hillary-Trump comparison was like comparing apples to....”rancid meat.”

After all this, they spent years alleging tweets from foreign sources somehow overpowered all their wild screeds. PolitiFact flagged exactly none of these comments as in need of “fact checking.”

Journalists often think extravagantly of themselves as the lifeblood of democracy. So when their direst warnings were ignored by too many voters, they endlessly proclaimed that democracy is dying. It was poisoned by evil bots from Moscow. Evidence to the contrary won't ever change their minds. But it should.