WashPost Opinion Shocker: Tumulty Admits 'What the House GOP Rebels Were Right About' 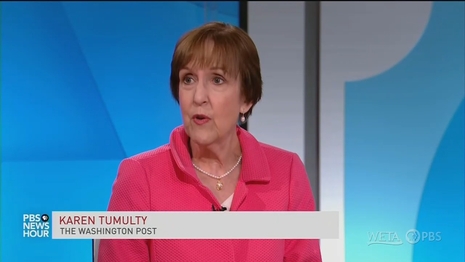 After a week of leftist-media hazing about a “hard right” faction holding Kevin McCarthy’s bid for House Speaker “hostage,” it’s a breath of fresh air to find Washington Post columnist (and Deputy Opinion Editor) Karen Tumulty acknowledging that there were principled reasons to negotiate in a piece entitled "What the House GOP rebels were right about." It turns out anyone can see Congress has a broken system, regardless of party.

Tumulty noted the "hardliners" had a point on how the legislative machine operates these days:

Procedural issues rarely get the attention they deserve, which is why it has largely slipped the public’s notice that in the past few decades, legislating has become far more centralized, with power increasingly concentrated in the leadership offices of whichever party happens to have a majority at the moment. Individual lawmakers and even committees of jurisdiction are routinely sidelined as sprawling pieces of legislation, especially spending bills, are crafted behind closed doors and presented to members as take-it-or-leave-it propositions — often as a cataclysmic deadline approaches.

Since 2000, the average number of pages in legislation enacted into law has roughly doubled, according to the Brookings Institution; the recent $1.7-trillion fiscal 2023 omnibus spending package, presented to lawmakers three days before they had to vote on it, came in at more than 4,000 pages.

And consider this: As recently as the mid- to late-1990s, when Newt Gingrich (R) was speaker, more than half the bills that reached the House floor did so under an “open rule” — that is, any lawmaker could offer an amendment to be voted upon by the entire chamber, according to statistics compiled by the Bipartisan Policy Center. But since 2016, under speakers Paul Ryan (R) and Nancy Pelosi (D), there has not been an open rule on a single piece of legislation.

Tumulty added that slim majorities make it more likely for speakers to want to control the agenda. Today's media play a role, in that newer legislators can evade the old practice of "go along, get along" with senior members, instead seeking attention with provocative statements on cable news and in social media. There are also political reasons to like less debate: "Freer rules on the House floor would mean they would be put on the spot more often, casting what are often difficult votes on amendments that could come back to haunt them at election time."

She notes that not every reform is advocated for highly principled reasons. But today's media could clearly champion more open debate and transparency and expecting legislators to actually read (or make staff members read) the bills they're voting on.

This column came as a surprise -- especially after Tumulty mourned on January 3 that “Whoever the next GOP speaker is, the job will be a living hell.”