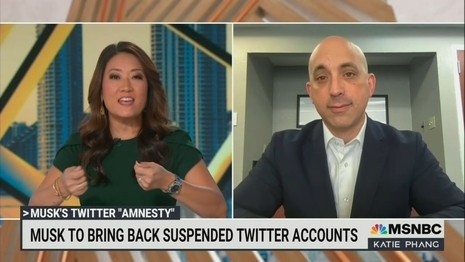 On MSNBC on Sunday, weekend host Katie Phang sounded furious about Elon Musk offering a Twitter "amnesty" to some banned users. She asked Anti-Defamation League CEO Jonathan Greenblatt about how the Left should "get the reins" on Twitter. They can't stand this "free speech" business. He said freedom of speech isn't freedom to slander.

Last week, Greenblatt offered the same routine on CNN, as anchor Erica Hill noted the ADL was partnering with the Gay and Lesbian Alliance Against Defamation (GLAAD). These groups use their "defamation" branding to pressure the social-media giants to punish and curb conservatives. The Left employs Orwellian lingo about "diversity and inclusion" to exclude their opponents.

We also explore Brian Stelter looking like a reasonable moderate next to the radical-leftist censor Nandini Jammi, who wants to defund conservative news sites from Fox News to Breitbart.