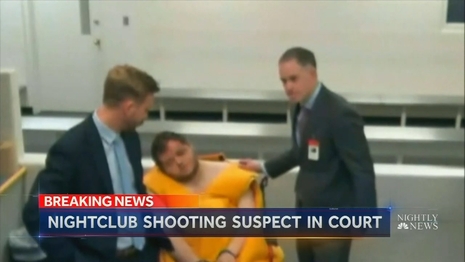 The story by reporters Robert Klemko, Mark Berman and Reis Thebault did carry a picture of a large “Pride” flag hanging over Colorado Springs City Hall.

This came in paragraph 3:

The rampage on Saturday night shattered the fragile sense of security that Club Q, one of only two local gay bars, offered a community that has long faced discrimination in this bastion of American conservatism.

"Bastions of conservatism" threaten the safety of gay bars. Then, at paragraph 8:

The symbolism was striking for a place once known as the “hate city,” where for decades anti-LGBTQ Christian fundamentalist groups and local leaders fought against gay rights.

“As I see this flag above me, what I remember is the many times that this building chose to deny the existence of LGBTQ people,” Leslie Herod, a Colorado Springs native and the first gay African American elected to the state’s legislature, said at the flag’s unveiling. “That it took a tragedy like this to have an LGBTQ flag in this building is wrong.”

As Herod spoke, Colorado Springs Mayor John Suthers (R) stood on the steps to her right, hands clasped in front of him. As Colorado’s attorney general, a post he held for 10 years, Suthers fought in court to bar same-sex marriage in the state, suing the Boulder County clerk for issuing same-sex marriage licenses in 2014.

“Knowing that John Suthers has fought against LGBTQ equality since I’ve been aware, and seeing him stand to the side here — it struck me,” Herod said.

Suthers did not speak at the event. In an emailed statement afterward, Suthers said: “I believe everyone has the right to live in a place where they are safe, and I stand with our community as we are all together grieving the senseless loss of life that occurred at Club Q.”

The Club Q attack came during a period of increasing anti-LGBTQ laws and rhetoric, and advocates have said such activity often inspires violence.

So the “right-wingers often inspire violence" came long before the non-binary murderer part in paragraph 31, in the story's last column:

In their filings, defense attorneys also asked to have access to the arrest affidavit, saying that it “provides the basis for the arrest and detention” of the shooting suspect and that they need it for providing effective counsel. The attorneys also said the suspected attacker is nonbinary and uses the pronouns they/them.

The filings saying that Aldrich identifies as nonbinary come as investigators have so far not publicly discussed any potential motive in the case. Officials also have not confirmed whether they will pursue hate-crime charges in court.

Ann England, a clinical professor of law at the University of Colorado, said it was common for attorneys to clarify in court how clients wish to be addressed. What is unusual here, she said, was putting the information out in court documents.

“The only curious thing is that they decided to put that in a filing, knowing this case has tons of publicity,” said England, who previously worked at the Colorado state public defender’s office.

That information “had to have come from the client,” England said. “The client would’ve had to say, this is how I identify myself.”

The District Attorney in the case said this declaration would have no impact on his prosecution.