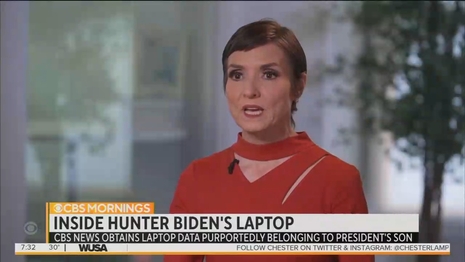 On Monday morning, CBS News became the first of the Big Three networks to announce that their "independent forensic review" found Hunter Biden's laptop is full of authentic contents. They didn't dwell on how CBS mocked this laptop as Fake News before Biden was elected in 2020. Then CBS did not air a story on Monday evening, or on Tuesday, or on Wednesday. It looks like a one-and-done.

ABC and NBC were not spurred to report its own version of the CBS story. NBC was more determined to do multiple stories last weekend on the White House wedding of Hunter's daughter Naomi Biden, with Kristen Welker stories on Friday's Nightly News and Saturday's Today.

On Friday, NBC anchor Tom Llamas introduced the last story: "Finally, it is the hottest invitation in Washington this weekend. President Biden`s granddaughter about to join a very short list of brides who said I do at the White House." Kristen Welker gushed: "Now, a new couple forging a more perfect union at Americas most famous address."

Monica Alba offered another story on Saturday's Nightly News. "History in the nation`s capital today, bridal parties walking down the aisle, instead of political parties divided by it. A White House wedding for President Biden`s first grandchild, Naomi, who married Peter Neal in a private ceremony Saturday, wearing Ralph Lauren and surrounded by 250 guests, all with a view of the Washington Monument on a chilly fall day."

The White House refused to grant media access to the nuptials, saying it was "private," and then it came out that they welcomed in Vogue magazine for pre-wedding photos. NBC didn't act like they needed any access in order to grant positive publicity.

Let's revisit the timeline put together by MRC's Geoffrey Dickens of how the broadcast networks have suppressed the Hunter-laptop story from October 14, 2020 through the morning of November 21, 2022:

April 10, 2021: CBS This Morning correspondent Brook Silva-Braga briefly (26 seconds) brings up the laptop controversy in a story about internet censorship.

May 18, 2022:  NBC Nightly News ended its forty-seven-day silence on the laptop scandal with a story by Hallie Jackson on how Hunter Biden has paid back a tax bill of $2 million. Jackson also reported the story on the May 19 Today. ABC, CBS = 0 seconds.

June 14, 2022: ABC's Good Morning America interviewed Hunter's ex-wife Kathleen Buhle about her memoir If We Break. Anchor Amy Robach merely mentioned the laptop in passing in a sympathetic question: We’ve seen images of Hunter, the ones that were on his laptop looking disheveled. Was that the husband you knew in moments, at times?" CBS also interviewed Buhle, but never mentioned the laptop.

June 27, 2022: London's Daily Mail reports an audio recording was released of Joe Biden calling Hunter in December 2018 about a story on the Biden business dealings in the New York Times. Joe Biden said "I thought the article released online, it’s going to be printed tomorrow in the Times, was good. I think you’re clear." ABC, CBS, NBC = 0 seconds.

September 12, 2022: New York magazine, which rarely missed a chance to rake President Trump across the coals, has a surprising cover story titled “The Sordid Saga of Hunter Biden's Laptop - And Why It Still Matters.” ABC, CBS, NBC = 0 seconds.

October 6, 2022: The Washington Post reported federal agents believe they have a plausible case to charge the president son with tax crimes, and also with lying on a gun application when he said he wasn't using illegal drugs. ABC, CBS, and NBC all reported this.