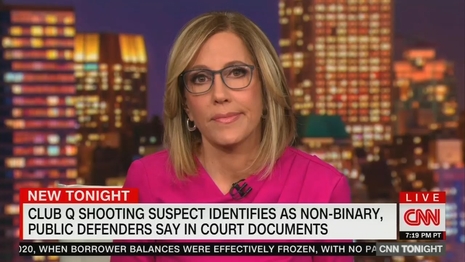 The chorus of "I told you so" broke out after public defenders of the alleged mass shooter at a gay nightclub in Colorado Springs, Colorado explained their client was "non-binary" and used "they/them" pronouns. So much for the notion that statements by Tucker Carlson and GOP politicians were somehow responsible for the violent crimes. On every leftist channel, they were blaming "a climate of rhetoric" instead of the shooter. CNN's Alison Camerota was beside herself.

Conservatives have (and should have) blamed the criminal for the violent crimes committed. As we pointed out Monday, law enforcement hadn't located a movie for these murders, but the Left pounced on "anti-LGBTQ hate" as the real killer. They didn't have an easy way out of that dark alley once the defense lawyers spoke.

We also discuss how the coverage of scandals is one of the most obvious ways the media demonstrate they are Democrats. After two years of energetic promotion of the House January 6 probe and other anti-Trump investigations, suddenly the media are attempting to shame House Republicans out of hearings into the border crisis or into Hunter Biden's global buckraking off of his father's name.

Enjoy the podcast below, or wherever you listen to podcasts. Our thanks to you for listening to our podcasts. You could check some older episodes on the long weekend!