NewsBusters Podcast: 'Tis the Season to Adore the Obamas 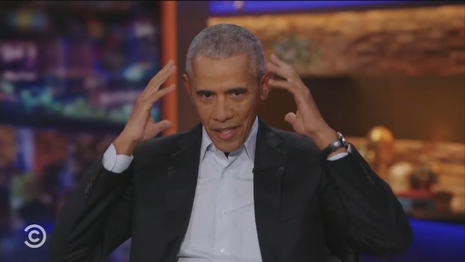 Now that the election season is over, it's that special time on the political calendar when the Obamas come out of their mansion and bless their adoring media with the joy of their presence. Barack Obama lowered himself to The Daily Show on Comedy Central with Trevor Noah, and they discussed how Fox News has turbocharged divisions, and now the tone is so toxic.

Whether it's People magazine or National Public Radio, Michelle Obama is running around selling a new advice-guru book titled The Light We Carry. She's calling herself "honest and vulnerable." They're honestly super-wealthy elites. Between their multi-book deals and their production company's deal with Netflix, they've probably worth more than $100 million, but the pro-Obama media never wants to put a number together. They know somehow that Trump is lying if he calls himself a billionaire, but they want everyone to remain incurious about how rich the Obamas have become.

Mrs. Obama tried to tell the NPR audience that when she says "we go high" doesn't mean that the Left can't hold on their rage, but it needs to be harnessed to reason. You can somehow be civil and filled with rage. That doesn't make any sense, except this lady wants everyone to embrace the contradiction and just love her.

The New York Times proclaims that the books the Obamas compose have "gorgeous" prose and it's "lucky us" who get to spend some time in the pages with them. That's not what Jared and Ivanka received, at all. Enjoy the podcast below, or wherever you listen to podcasts.