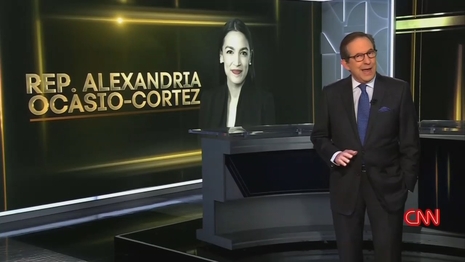 As host of Fox News Sunday, Chris Wallace used to take pride in the notion of being a tough but fair interviewer. That’s not what viewers are seeing on his new CNN show Who’s Talking to Chris Wallace? Look no further than his latest interview with Rep. Alexandria Ocasio-Cortez (D-N.Y.).

It began with a brief glimpse of the previous Wallace. He asked AOC if voters were looking for something less extreme. Naturally, the radical leftist protested she was in no way extreme with right-wingers who want illegal aliens to be physically harmed. No footnote was requested.

But then Wallace aided the myth of AOC by underlining how she somehow offered brilliant questioning of former Trump fixer Michael Cohen, allegedly due to her “razor-sharp” instincts gleaned from being a bartender.

After an ad break, Wallace lauded her as a social-media star, but relayed all this fame “has come at a price.”

He recalled that last December on Twitter, Trump backer Steve Cortes mocked her fiancé displaying “gross pale male feet in public.” Wallace quoted her Twitter response: "If Republicans are mad they can't date me, they can just say that, instead of projecting their sexual frustrations on my boyfriend's feet, you creepy weirdos.”

Why does this deserve a great national airing? This set up Ocasio-Cortez to psychologize her critics on the right, that their criticism is “very much rooted in my identity as a woman, and I believe rooted in a great deal of misogyny and...underlying issues around sex and identity.” It’s somehow nobody’s business who she’s dating, which is a silly thing for a political celebrity with 13 million Twitter followers to proclaim. 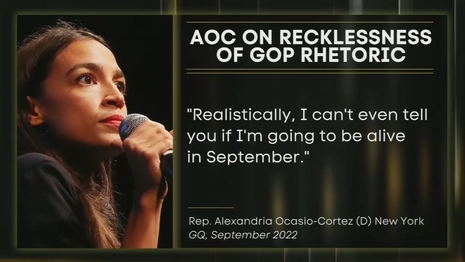 Then the drama-queen section really kicked in. Over a screen reading “AOC on Recklessness of GOP Rhetoric,” Wallace asked: “I want to put up something that you said this summer, which is serious. ‘Realistically, I can't even tell you if I'm going to be alive in September.’ Congresswoman, is that real? Do you feel your life is in danger?”

AOC insisted, “I've felt that my life has been in danger since the moment that I won my primary election in 2018,” and claimed she asks her fiancé to come out to her car to walk her inside her apartment building. She added she has kind of a “static electricity” around her. But she’s not an egotist.

This is somehow not in the realm of conspiracy theory. Wallace enabled this routine: “How do you live with it? And is it worth it?” She said, “I need to be as robust and urgent as possible to say what I need to say because I don't want to take the time I have for granted.”

Wallace added, sympathetically: “Do you ever think let somebody else carry the torch?” By this point, there is zero difference between Wallace and perennial CNN suckup Larry King.

The socialist congresswoman then uncorked a lecture about how “when we look at Jim Crow, when we look at the era of reconstruction and resistance to us becoming a more just country, some of the darkest pockets in this country, most violent pockets of this country used the threat of violence as a chilling effect to prevent people from trying to stand up for the right thing.”

Today’s conservatives are always being accused of being “Jim Crow 2.0.” CNN wallows in it, but never challenges it.

The new Chris Wallace show is like pretty much everything else on CNN since Chris Licht glad-handed Republicans on Capitol Hill promising something different on air. Licht’s talk of “rebuilding trust” is meaningless. Nothing has changed at CNN. It’s still a liberal swamp.