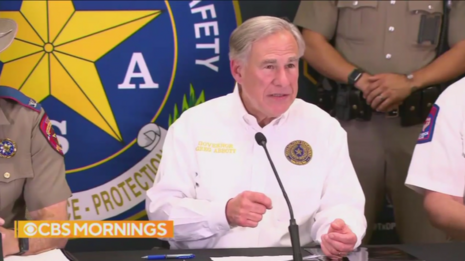 Liberals can't help but compare conservative positions to the positions of mass shooters...or people who won't stop them.

Al Gore just compared "climate deniers" to the cops who stood around at the elementary school in Uvalde Texas. On Monday night's All Things Considered, Austin-based NPR reporter Sergio Martinez-Beltran compared "hardline Republicans" pushing Texas Gov. Greg Abbott on immigration to the mass shooter at the El Paso Walmart in 2019:

MARTINEZ-BELTRAN: Earlier this month, Abbott signed an executive order authorizing the Texas National Guard and the Department of Public Safety to apprehend migrants and return them to the ports of entry. Still, some hardline Republicans have criticized Abbott for stopping short of invoking a, quote, "invasion under the U.S. Constitution." That's the same language used by a white man in 2019 before killing 23 people, most of them Hispanic, in El Paso.

NPR failed to identify who these allegedly murder-friendly Republicans are, but the liberal Texas Tribune reported "The Center for Renewing America, a conservative think tank led by Ken Cuccinelli, a former Homeland Security official under Trump, has been leading the charge to get Abbott to declare an invasion."

(On today's Morning Edition, they did it again, not only comparing talk of "invasion" to the El Paso shooting, but also to the Buffalo supermarket shooting, since NPR smells "white replacement theory.")

Martinez-Beltran called Abbott an "ultraconservative" -- even with "hardliners" who think he's not going far enough -- but Beto O'Rourke was not an "ultraliberal," even though NPR said "On immigration, guns, abortion and just about every other issue, Beto O'Rourke and Abbott have polar opposite views. And O'Rourke is trying to get the votes of Republicans and independents who are turned off by Abbott's rhetoric."

NPR didn't recall O'Rourke's position on immigration as "take the wall down." They touted O'Rourke was only behind in the latest polls by five points. FiveThirtyEight.com says the polls average to about eight points.

O'Rourke lost a run for president, and lost to Ted Cruz in a Senate race, but Martinez-Beltran is only projecting a bleak future for Abbott:

MARTINEZ-BELTRAN: Now, Abbott is not the first Republican governor nor the last to push for ultraconservative immigration policies. In 1994, California passed a ballot proposal that targeted people who were undocumented, preventing them from using public services, including schools. Former Governor Pete Wilson was the face of the proposal.

JAN BREWER: Though many people disagree, I firmly believe it represents what's best for Arizona.

MARTINEZ-BELTRAN: But a look at Wilson and Brewer's legacy might give Abbott an idea of what could happen to him in the long run. Wilson tried to run for president, and his campaign lasted just one month. Meanwhile, since she left office, Brewer has not been a major player in Republican politics.

NPR, the alleged oasis of civility in journalism, is supported in part by you, the American taxpayer.