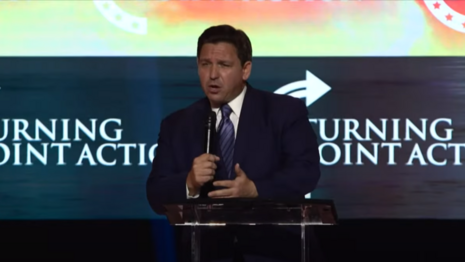 Politico senior media writer Jack Shafer typed an article titled “Unsolicited Advice for the Pouty Republicans Who Stiff Reporters: 2024 GOP contenders are making a big mistake by only talking to themselves.” The problem here is you don’t have to be “pouty” to make a decision to restrict media access. And not all “reporters” are liberal (so-called “mainstream”) reporters. That’s an insult to conservative reporters.

Shafer, like others, is referring to Gov. Ron DeSantis and the Florida Republican Party restricting media access to their “Sunshine Summit.” At least Shafer refers to Barack Obama, who “saw the good politics in freezing the press out.” Joe Biden greatly restricted media access in his 2020 “basement” campaign. Was that “pouty”?

-- "When a politician bans the press, the press has no alternative [but] to dig deeper to find a story." There is an alternative, and that's to go soft, as they do on Democrats. This isn't often about investigative reporting, it's about embarrassing the politician at public events with "gotcha" questions.

-- "Not all negative press — and that’s what press-avoidant politicians fear — is necessarily bad for a candidate. Trump, whose contentious relationship with the press has no rival, has traditionally spoken expansively to reporters and continues to do so." So a majority of Republicans don't want Trump to run again, and he's the role model?

-- "A candidate can maintain a cone of silence, but he can’t stop the flow of information. As [Dave] Weigel wrote, reporters can interview the attendees from the events they’ve been excluded from or listen to recordings of events." Yes, but that's why it shouldn't look like some ban on reporting. The point is that it looks to Republicans like you're not bending over backwards to be victimized by hostile reporters.

-- "[G]going mute also makes the candidate look weak. It becomes part of their story. And it gives the foes of taciturn Republicans an opportunity to land a punch. 'My opponent is too chicken to face the New York Times. How well is he going to do with Vladimir Putin?'” That tactic has been used against Joe Biden, and the Democrats are often "too chicken to face Fox News" and other conservative outlets. They...take the risk.

Making the media the enemy has a way of boomeranging on politicians. See the careers of George Wallace, Richard Nixon and Spiro Agnew for historical examples….

Then again, there may be more wisdom in cutting off the press than accounted for here. As former Vice President Hubert Humphrey once wrote, “It is always a risk to speak to the press: They are likely to report what you say.”