On the Newsmax show American Agenda on Friday afternoon, I was invited on to discuss the media's sympathetic coverage of Hunter Biden (when it infrequently occurs). They quoted Kevin Tober's article on a CNN story by Drew Griffin. President Trump's children have all drawn tougher coverage than Hunter receives.

We also discussed how Politico published a column by John F. Harris that bizarrely tried to claim Biden's a good president who deserves a B on his report card. The headine was "Wait, Is Biden a Better President Than People Thought?" They noted that I tweeted a different headline: "Wait, Are We on the Biden Payroll?"

Harris began by noting the "progressives" wish Biden were a different kind of president, and have felt "rising despair and even rage about the prospects for achieving the kind of fundamental change they believe the country and world urgently need." But....:

Suddenly, the mood is looking up. Manchin’s surprise decision to back $370 billion in tax credits to stimulate clean-energy technologies and other progressive environmental priorities came after many Democrats had concluded hope was pointless. Assuming the deal survives further legislative maneuvering in coming days — not a forgone conclusion — it invites a reappraisal of Biden’s leadership. Maybe that isn’t hopeless, either?

Following a pattern with long roots in his career, Biden is looking a little like the student who is failing his class for most of the semester, then pulls an all-nighter and slips the paper under the professor’s door at 6 a.m. It turns out the paper is actually pretty good. There’s no way he’s getting an A for the term, but no fair grader would give him an F, either. A solid B is within reach. 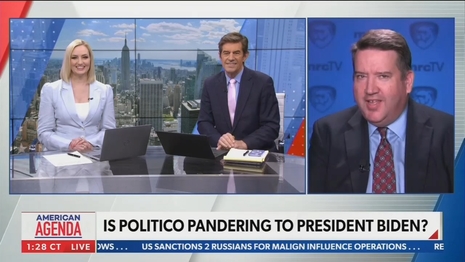 Inflation's at a historic high, we're technically now in a recession, and the Southern border is out of control, and that's "a solid B"? Baloney.

Harris argued that "Pulling a significant victory out of the hat three months before midterms quite justifiably emboldens him in ignoring doubters and critics." Whilte the Manchin deal is "just a fraction of the ambitious spending called for in Biden’s original “Build Back Better” legislation. The $370 billion on environmental measures still represents the U.S. government’s largest step to date in lowering carbon output. That’s historic."

Still, Harris acknowledges most Democrats want someone else on the ballot in 2024. Then there was how the media was covering recession, so I described the media approach:

"It used to be that we defined a recession is two successive quarters of negative growth. But Biden says we shouldn't do that anymore. So we're all going to change the definition."

It's so bad that Politifact decried it's false to say that the president is trying to change the definition. That's how awful the liberal media is trying to get. There goes the whole idea that they're the fact based, reality based press. They've just shot that all to Hell.

This MRC on TV segment was brought to you in part by LifeLock.