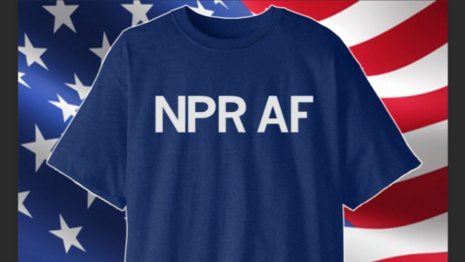 Conservative Twitter pounced on the news that NPR was creating a "disinformation" team, noting NPR puts out its own factually fractured "news." But their avoidance of the Kavanaugh assassination attempt remains stunning. They can devote major resources to stories that deeply resonate with them, but not that.

-- On the July 14 All Things Considered, NPR devoted 10 minutes and 43 seconds to investigative panicking that Trump-loving canvassers are going door to door and asking people who they voted for in 2020. That's right: no story on the foiled Kavanaugh killing, but almost 11 minutes on this. But wait! They devoted another 12 minutes to this Hot News on the July 19 NPR Politics Podcast.

-- On the July 1 edition of the NPR Politics Podcast, their Supreme Court reporter Nina Totenberg appeared, and said nothing about the attempted Kavanaugh assassination. But she did feel President Biden's pain: "No president has been in this position. This moment is the fulfillment of the right, some would say the extreme right, and their plans to, essentially, get done what they couldn't get done in Congress by taking possession of the Supreme Court."

-- On the June 27 All Things Considered newscast, a story by Danielle Kurtzleben earnestly sympathized with protests outside the Kavanaugh home, but skipped the failed assassin. A protester named Laura Kriv touted "the Janes," the Chicago abortion collective that killed thousands of babies before Roe vs. Wade. They also inspired the current pro-abortion vandalism of "Jane's Revenge," which also isn't covered on NPR.

-- On the June 21 All Things Considered, three days before the Dobbs ruling, NPR devoted 10 minutes and 53 seconds to "opposition research" on Federalist Society president Leonard Leo under the headline "One man's outsized role in shaping the Supreme Court." (They posted a longer 13-minute version in their podcast Consider This.) They surely scared listeners by declaring Leo is a "very, very serious Catholic" who attends Mass daily. That's scary, unlike their friendly abortion backer Joe "Rosary in My Pocket' Biden.