Pew Poll Finds the Public Backs Equal Coverage of Issues; Most of the Press Disagree

On the front of Thursday's Washington Times was a story by Stephen Dinan on a new poll that showed a dramatic difference in public opinion on the goals of journalism.

Less than half of journalists — 44% — say every side of an issue deserves “equal coverage,” according to a survey of the industry by the Pew Research Center.

Among the broader community, though, the vast majority — 76% — believe in equal coverage.

Pew asked respondents to pick between two statements: “Journalists should always strive to give every side equal coverage” or “Every side does not always deserve equal coverage.”

Pew released a little bit of a demographic breakdown and found that journalists who say their audience leans right were more inclined to feel both sides deserved equal coverage (at 57%) than journalists whose audience skewed left (just 30%).

The pollsters found among the country at large, 76% say journalists should strive to give equal coverage, though again self-identified Republicans were more committed (87%) than Democrats (68%). But that's still high for Democrats.

Dinan asked me for comment, and I was quoted in the paper this way: “It just seems to me that the dominant message of journalism, in J-schools, journalism conferences, is the arrival of Donald Trump should have offered a death knell to the idea that there are two sides of things.” 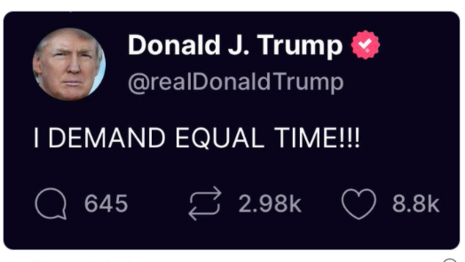 You can sense the debate within the story itself, as David Stringer, a former president of the Oklahoma Press Association said “I think journalists are reacting to the current climate of ‘alternative facts’ and the condition of lies getting repeated and shared over social media to shape the narrative in a particular way,” he said. “How’d we get here? Because we’ve reached a point where biased (sometimes outright false) information is reported as fact and people inside the target bubble believe it.”

It's understandable that journalists would say you don't balance "facts" and "false information." But the problem is they often confuse their own liberal opinions -- on climate, or guns, or LGBT etc. -- with the "facts," and consider the conservative opinion to be "false." They despise "bothsidesism" -- yes, the people who claim they're "saving democracy" while they shut down debates.

Dinan ended with more of my thoughts:

“If the news media thinks they have a credibility problem, this is how you fix it,” he said. “You fix it by giving people more facts, less spin. But everything in their political bodies tells them not to do that. They feel it’s their job to usher in the right side of history....

“The more involved you are in consuming media, the more cynical you get about the idea that anybody’s observing objectivity in their journalism,” he said. “I don’t want to say that the public is naive to expect objectivity. On the contrary, I find it a hopeful sign that readers want some more neutrality. They’re looking not to be spun.”