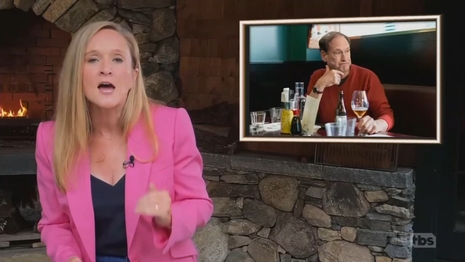 Celebrities pretty much lost their minds when the Supreme Court overturned Roe v. Wade and returned abortion policy to the states. Even that anti-cyberbullying activist Monica Lewinsky turned abusive on Twitter with the F-bombs.

But Christian Toto at Hollywood in Toto noted late-night TBS "comedian" Samantha Bee took it one step further. She lobbied the American people to "raise hell" and disturb the peace for the justices, to never let Justice Alito eat in peace again.

No one in the liberal media raised a question about whether this might incite violence -- after a man attempted to assassinate Justice Brett Kavanaugh. TBS was completely fine with this campaign...because they fear no one is going to disturb a restaurant meal for their lesser-known bosses.

The same goes for advertisers like Hyundai...whose ad came on right after this rant.

Bee ranted "It is insane that a Supreme Court that doesn’t represent a majority of Americans will cause women more death and suffering." (Babies aren't counted in the death toll.) Then came the call to action, which spurred the #RaiseHell Twitter campaign with the TBS promo.

BEE: I can't describe how painful it is to be here now in a place where the Supreme Court has the power to erase 50 years of constitutional law. Make no mistake, this is not where it ends. Conservatives will not rest until they have come for all of our rights. Everything we have fought for will be lost unless we take it back. It's not just about voting in November. It's about doing everything in our power to protect and help vulnerable people access abortion across state lines. And we have to raise hell in our cities, in Washington, in every restaurant Justice Alito eats at for the rest of his life, because if Republicans have made our lives hell, it’s time to return the favor.

It's quite tempting to urge Bee to simply go back and raise hell in Canada. (She has dual citizenship after getting naturalized in 2014.) It's also quite tempting to suggest Bee should have someone harass her at restaurants, and see if she likes it.

Leftists love urging their followers to ruin restaurant meals of conservatives, as they did to Trump officials and Sen. Mitch McConnell when Trump was president. Many remember then-press secretary Sarah Huckabee Sanders being told to leave a restaurant in Charlottesville. But after the Kavanaugh scare, shouldn't someone in the media call for calmer heads?

They clearly don't fear the idea that Trump fans could return the favor, which is odd considering they can't stop talking about January 6.

Toto pointed out that a year ago, he asked what the cable network thought of Bee’s unhinged rant against Gov. Ron DeSantis, where she whacked him as a racist and implored him to "look into my eyes and eat shit." No response from TBS.

Toto once more asked the TBS press office if it had any response to Bee’s latest comments. Her rant came hours before real violence broke out from pro-choice protests. Again, no response.