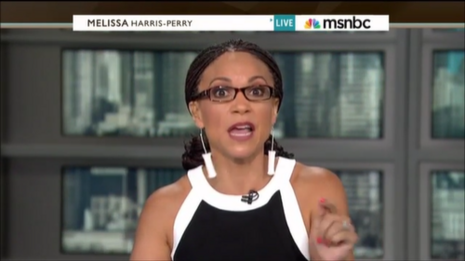 Back in 2013, then-MSNBC host Melissa Harris-Perry drew attention to the abortion-on-demand crowd in Texas by putting on a pair of tampon earrings in the middle of her show. Harris-Perry is now host of a national public-radio show called The Takeaway out of WNYC Radio in New York.

On Thursday, Harris-Perry energetically compared the Dobbs decision overturning Roe vs. Wade to the Dred Scott fugitive-slave decision of 1857. It came in a segment titled “Reproductive Coercion is an American Cornerstone.” She introduced her critical race theory of abortion this way:

HARRIS-PERRY:  Missouri became the first state in the nation to ban all abortions…there is an irony that Missouri so eagerly participated in the reversal of the right to choose abortion. The state is the site of the Supreme Court's most infamous decision declaring that a group of people did not have foundational rights, Dred Scott v. Sandford. In 1857, the Supreme Court decided the case of Dred Scott, a Black man born into slavery in Virginia and living in Missouri.

She noted conservatives like Antonin Scalia have cited Dred Scott in their pro-life dissents, then added: “Since last week's decision by the court to reverse Roe v. Wade, many progressives have revived this Dred Scott conversation, but this time arguing that future generations will look back on Dobbs with the same disgust that is now reserved for Taney's 1857 opinion.”

So the slave economy of the 1850s is energetically compared to the 2020s. Harris-Perry explained “You see, it's worth noting that reproductive coercion was not just incidental in American history, it was its cornerstone, providing the inter-generational channel bondage of free labor that undergirds American wealth.”

Her expert was Dr. Deborah Gray White, a gender-studies professor at Rutgers, who explained that back then, “the increase of the slave population is dependent on Black women's wombs…it was in the economic interests of slave owners because a slave child was profitable at birth, a slave infant was worth something monetarily.”

This spurred Harris-Perry to connect her crackpot dots: “Professor Deborah Gray White reminded me that this history is neither distant nor irrelevant. It holds lessons not only for those of us descended from these enslaved Black women, but it suggests possibilities for all American women.”

As if all American women were about to be slaves because they can’t have abortions in some states.

Later on Thursday, the national public-radio show Marketplace discussed the possibility of setting up abortion clinics on Indian reservations. It was a non-starter.

They turned to abortion activist Rachael Lorenzo, who runs something called the Indigenous Women’s Fund to finance abortions for the native American women. The show reported that “tribal lands were abortion-care deserts long before this wave of anti-abortion legislation.” That’s because most of their health care is federally funded, meaning the Hyde Amendment prevents taxpayer-funded abortions.

Lorenzo even used the word “apocalypse” to describe the absence of abortions!

“We see rhetoric on social media or in the news, like, ‘Roe v. Wade [being overturned] is the end, the sky is falling,’” Lorenzo said. “But the sky has been falling for Native people specifically. We’ve been living in the apocalypse without full bodily autonomy.”