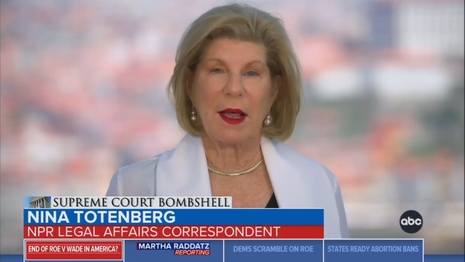 On Weekend Edition on Saturday morning, National Public Radio legal reporter Nina Totenberg warned NPR's liberal base that the "very conservative" court is just getting started after the abortion decision, that next year will be another "rock-em-sock-em term." They're the most conservative in 75 years, and she (and others in public broadcasting) underlined that conservative rulings are harming the court's standing in public opinion.

TOTENBERG: Normally at this time, the justices would be exchanging their opinions and working with each other to resolve differences and reach some sort of consensus, but this is a court that's really riven with distrust, especially after the leak in May. And for the first time in the modern court era, there is no center. The court is the most conservative of any court in 75 years at least, and it's using the whip hand, it seems, to push a pretty conservative -- I would actually say very conservative -- agenda, and the result isn't great for the court as an institution. The Gallup poll just released shows that the court's approval ratings have plummeted to a historic low at 25 percent.

Totenberg mourned that the Supreme Court who voted 7 to 2 for Roe vs. Wade was also mostly Republican-appointed, and that somehow William Brennan and Harry Blackmun were "centrist conservatives."

TOTENBERG: They were just a different kind of Republican appointees. Even though they were conservatives, it was a much more centrist conservatism. And that was slowly eroded. Today, we have a court with three Trump appointees and no Justice Merrick Garland, who would have been easily confirmed, but for the fact that Senate Majority Leader Mitch McConnell blocked any consideration of his nomination. And, of course, those are hardball tactics, but much more the norm now in the Senate, the House, and it appears even on the court.

SUSAN DAVIS, host: But, Nina, it's not like courts haven't taken unpopular positions before, even positions against the majority of the will of the public.

TOTENBERG: It certainly has. Any court can take a hit. You know, the country was furious in 1962 when a liberal court majority banished prayers in public schools. But this court is much more on a tear. It's reaching out for cases that it doesn't have to take yet. We have affirmative action next year. We have a case that the court reached out to accept about whether a business can turn away gay clients. And there's more - lots more. It's going to be another rock-em-sock-em term, and I think it's going to be that way for a long time.

There is no centrism at NPR, and they've been on a leftist tear since going on the air in 1971.