On June 18, someone captured video of President Biden riding a bike on vacation in Rehoboth Beach, Delaware. When he came to a stop, he caught his foot in the pedal and fell to the pavement. Without it being on tape, no one would have cared much.

On social media, conservatives quickly brought up how Trump was ridiculed for walking gingerly down a ramp at the West Point commencement in 2020. The liberal media – stoked by Trump-loathing social-media accounts – spread it far and wide. 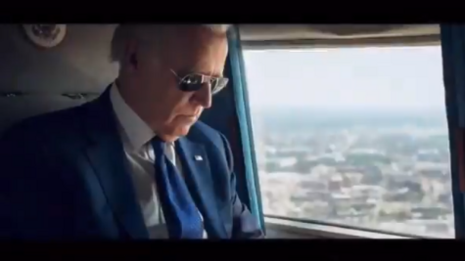 Spencer Brown at Townhall pointed out the Biden campaign even made an ad championing Biden’s vigor, that he runs up ramps while Trump tiptoed down one. CNN’s Chris Cillizza wrote a silly piece headlined “Why the Donald Trump-West Point ramp story actually matters.”

But what stood out on the Biden bike bumble was the “fact checkers.” An AP Fact Check quickly proclaimed: “Despite a fabricated screenshot circulating online, The Atlantic hasn't published an article with a headline describing President Joe Biden's bike fall as ‘heroism.”

The fake headline was “The Heroism of Biden’s Bike Fall: The President gracefully illustrated an important lesson for all Americans—when we fall, we must get back up.” Radio host Jason Rantz tweeted “AP is fact checking a satire of The Atlantic because they think people would believe it really came from that publication — which is telling.”

Reuters also fact-checked it. The typography is exactly the same as the magazine’s, so it would be easy for Biden critics to share and enjoy it.

The Twitter Moments sidebar also touted Reuters and Snopes with a different take on the Biden bike fall. This time, the fakers made up Jen Psaki tweets. One parody tweet reads: “President Biden might need kneepads for riding his bike, but the last guy needed kneepads for visiting the Kremlin.” The second tweet says: “Yes, president Biden fell on his bike. To Donald Trump: a bike is something you ride when you have physical strength to lift your own knees.”

If you look carefully enough, Reuters pointed out that it was not Psaki’s actual Twitter handle and in the bottom-right corner it says “Parody by Back Rub.” So if you retweeted it, you’re not a careful reader. PolitiFact also filed a “Pants On Fire” article on the parody.

The “fact checkers” lunge to clear up these satires around Biden. But not for, say, Ron DeSantis.

Sister Toldjah at RedState noted that satirist Stephen Colbert badly mangled a DeSantis press conference from January 31, 2022. The CBS late-night host implied DeSantis refused to condemn a gaggle of  “about 20" neo-Nazis quacking in Orlando. Colbert cited an Orlando Sentinel story, but just the words “Gov. Ron DeSantis remained silent.” The actual sentence said he was silent "until Monday afternoon when he responded to a question about the rallies with a tirade against his political enemies.”

"Speaking of the worst people in public office..." pic.twitter.com/P4UJLXRWBF

Colbert then showed a 12-second video clip of this presser where the governor said he wouldn’t be smeared by Democrats. He insisted DeSantis didn’t have the courage to condemn the neo-Nazis. Again, the Orlando newspaper quoted DeSantis calling them “some jackasses doing this on the street” and said they’d be held accountable by law enforcement.

DeSantis went on to boast of having signed “the strongest antisemitism bill in the country” and denounced the Democrats for welcoming antisemites like Rep. Ilhan Omar.

But there were no fact checks: no AP, no Reuters, no Snopes, and no PolitiFact. Twitter had nothing to underline. Satirists on the Left have a free pass to smear DeSantis as a cowardly lion on neo-Nazis. The game is rigged.