On CNN’s Reliable Sources on June 19, host Brian Stelter touted the growing new trend in the “objective” media of creating a “democracy beat,” because Donald Trump and his devotees are a constant threat. Stelter compared it to a contractor fighting rot and mold in the house.

There’s something obvious and desirable about journalists focusing intently on elections and voter rights and election integrity battles. But there’s always this gelatinous layer of pomposity on top: that the media need to take sides and not allow “two sides” on democracy. 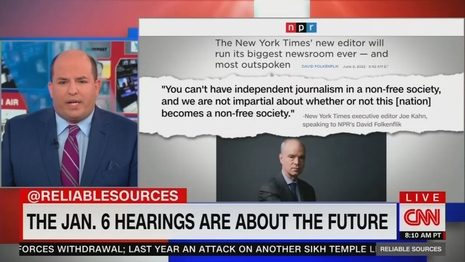 Take Joe Kahn, the newly designated executive editor of The New York Times, who told NPR media reporter David Folkenflik: “you can't have independent journalism in a non-free society, and we are not impartial about whether or not this nation becomes a non-free society.”

The danger here is if conservatives suggest the Times is not independent, not impartial, and not nudging America into being a free society, does this put them on the side of autocracy?

On his Sunday show, Stelter brought on Danielle Belton, executive editor of the website HuffPost, founded by Arianna Huffington, who wrote an entire book titled “Right Is Wrong,” railing against giving the conservative “fringe” a place in news coverage.

Belton belongs to that school, warning Stelter of an “extremist element within the conservative movement that is trying to take over the Republican Party,” and it’s the media’s job to stop it. So "the press, American people, all of us, anyone who's pro-democracy, pro-free press, pro-equality, this is what we're up against because these are the things these people do not want.” 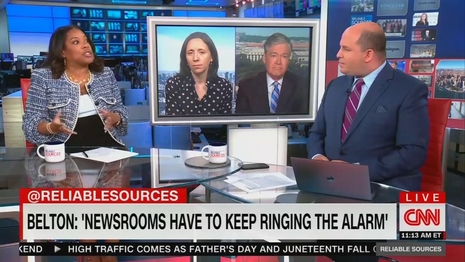 CNN’s John Harwood seconded the motion on the Stelter show. "We should not take sides on liberal versus conservative. However, this situation -- the Trump era more generally, but this particular situation -- that's not the spectrum. The spectrum is truth on the one side and lies on the other side."

You can see the point if it’s narrowed to Trump claiming he won in a “sacred landslide,” but the liberal media want to put the entire Republican Party into that one “democracy beat” issue, and ignore every other pressing national issue.

Somehow Harwood thinks he’s on the side of “truth” when he claims Biden shouldn’t be blamed for the country’s problems, and it looks again like the fate of “Democracy” is considered synonymous with the success of the Democrats.

At least Stelter noted a new Fox poll asked which party would "do a better job" on "preservation of American democracy,” and 46 percent of registered voters said Republicans compared to 45 percent who said Democrats. Stelter’s guests would probably blame the media for that, too.