When someone wants to complain about how our most respected news outlets once attempted to look “objective” but are now dwelling on performative activism, see Time magazine.

Time is a shadow of its former self. Every issue is a “double issue,” since no one needs a “weekly news magazine” at this late date. The cover of the June 20/27 issue looks like graffiti, or an overworked chalkboard. It lists the cities of putative mass shootings, and then demands in red capital letters “When Are We Going to Do Something? ENOUGH.”

Inside are articles with headlines like “In D.C., another cycle of inaction on guns.” From the high horse of “solidarity journalism,” the political elite is perennially inept at social change.

For another example of how Time is as overripe as a black banana, see the splashy 10-page photo spread titled “We Aren’t Going Anywhere: The pain and pride of a generation changing how America sees gender.” 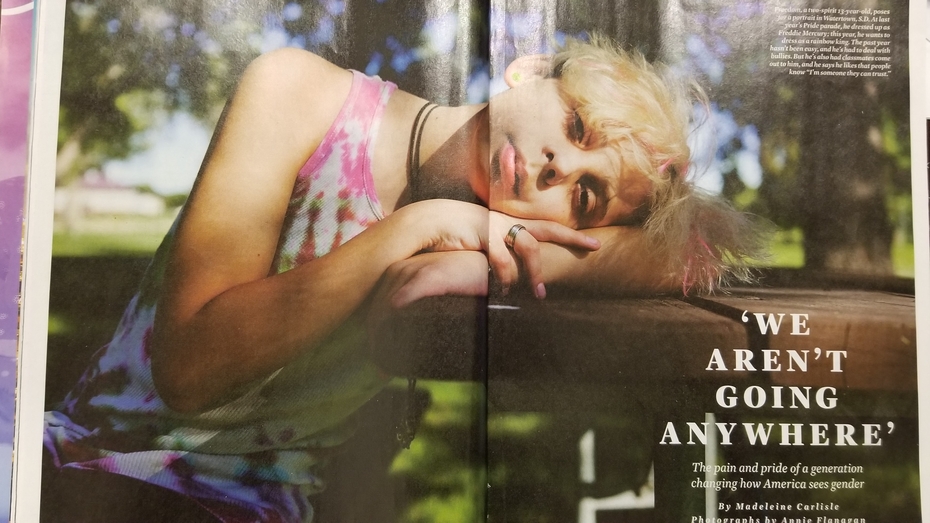 Above that is a caption for the two-page picture. “Freedom, a two-spirit 13-year-old, poses for a portrait in Watertown, S.D. At last year’s Pride parade, he dressed up as Freddie Mercury; this year, he wants to dress as a rainbow king.”

On the next page, another headline: “For trans and gender-expansive American adolescents, the past school year has been a paradox.”

Reporter Madeleine Carlisle promotes how “diverse gender identities and expressions” are breaking out all over, with “Generation Z leading new conversations that challenge traditional conceptions of the male-female gender binary.”

But oh no, “these young people have faced escalating attacks” from the right. “Conservative lawmakers have turned the full force of America’s fiery ‘culture wars’ on trans and gender-expansive youth, unleashing a torrent of antitrans state-level legislation.”

The “culture wars” are always started by conservatives, never by the heroic “gender-expansive” activists and their affiliated propaganda organs “leading new conversations.”

Another two-page photo carries the caption “Attendees dance at the Fiesta Youth LGBTQ Youth Prom in San Antonio...especially for LGBTQ teens. Leo, not pictured, who is qariwarmi, a two-spirit gender from their father’s Quechua culture in Peru, likes the spirit of community they find there.”

Next is a full-page photo of Evan, “crowned her school’s first out trans homecoming queen.”

Then came a two-page article by Carlisle sternly titled “The GOP Strategy to Use Trans Sports Bans for Political Gain.” A map shows which states “protect or restrict the rights of trans and gender-expansive people.” Don’t be a pain and suggest that letting “trans women” compete in girls’ sports “restricts the rights” of the “cisgender” girls, because Time doesn’t care.

California, for example, is called a “Safe Haven,” and it “leads the country in gender-equality laws; it mandates protections such as LGBTQ-inclusive curricula.” States like Florida have “Don’t Say Laws,” where teachers are “not allowed to teach about LGBTQ issues in some grades.”

The two sides of this fight are labeled the “conservatives” and the “LGBTQ advocates.” Carlisle cannot mention “antitrans laws” from Republicans without suggesting they’ll make kids suicidal. The Trevor Project activists roll out their poll that “85 percent of trans and nonbinary youth said recent debates about anti-trans bills had negatively affected their mental health.” Surrender to the Left, or children die. That’s called “winning through intimidation.”

Time’s decline is also signaled by the fact that Republicans get less space or respect than Communist China....because they routinely buy four pages of “news” in Time, a “China Daily” insert of State-Run News. It can be hard to tell whether it’s more or less propagandistic than the rest of the magazine.