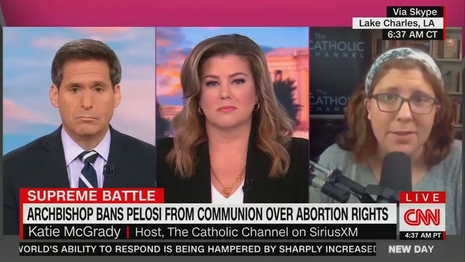 The news networks want to turn everything into pure politics, and McGrady explained the religious controversy: that Pelosi is one of the most famous Catholics in America –and proclaims herself a devout Catholic while she just pushed and passed a bill that would remove every abortion restriction in America.

McGrady insisted “He had to say something. And as he said has publicly, his conscience has been formed to the point where he felt it was necessary to pastorally reach out to her. This is not a punishment, this is a pastoral reach-out to say, until these things have happened, I don't know that you are in a state of grace to receive communion.”

It’s a pastor inviting Pelosi to repent her sinful public position and come back into communion with the Catholic belief that abortion is murder, a grave sin. No one expects her to recant.

CNN host John Berman asked: “Doesn't this put the archbishop though at odds, at least thematically, with Pope Francis, who has said, 'communion is not the reward of saints but the bread of sinners,' and the pope has called Joe Biden, who has largely the same position on abortion as Nancy Pelosi, a good Catholic?”

First, a good Catholic comes to communion in full realization that he or she is a sinner in need of grace. The Pope may have said this to Biden, but not in public. You have to take Biden’s word on that. It’s his claim that is what he was told in private. If Donald Trump told us the Pope said he was a good guy, how much trust would CNN put in that?

McGrady said this was a “great question,” and argued they're not really at odds.

McGRADY: You know, Pope Francis has said that he has never denied anyone communion. He also has said that abortion is the gravest evil of our time and that this is not an issue we can mince words on. The communion that we believe, the Eucharist, the source and summit of our faith, the most important thing as Catholics that we can receive, it's not a prize, but the confessional is also not a courtroom. And Archbishop Cordileone has invited Nancy Pelosi to come to confession and to talk to him so that he can understand where she's coming from, so that she can understand where he is coming from. This was actually an invitation I think to dialogue, not just a condemnation of perspective and belief.

Keilar than tried to insist that the Archbishop was an "outlier" and that while Pope Francis insisted people should get COVID vaccines as an "act of love," the Archbishop is unvaccinated. McGrady underlined that Pelosi presenting herself for communion is a "cause for scandal." Keilar concluded the interview by reporting "according to Pelosi's office, she did receive the sacrament, I believe, this weekend in Georgetown at the Holy Trinity Catholic Church there."

Here’s a video from @holytrinitydc showing House Speaker Nancy Pelosi receiving communion from a Eucharistic minister -not the priest- at mass on Sunday. She’s wearing an orange blazer in the right line. pic.twitter.com/4WnChU7KGj

CNN's welcoming of a religious explanation of the Pelosi communion controversy was sponsored in part by IHOP.