Celebrities are naturally popular on Twitter, but it’s annoying that liberals – who insist they believe in facts and science and experts and nuance – demand exactly none of that from celebrities. 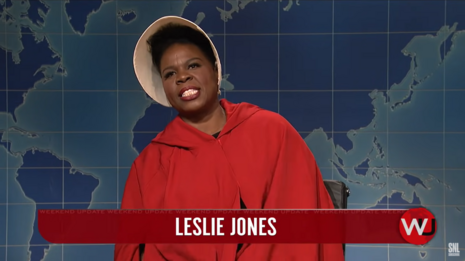 A family member asked me for a friendly fact check after former Saturday Night Live cast member Leslie Jones had a cow on Twitter over the leaked draft opinion on Roe vs. Wade. There is a panic on the Left that red states will do anything to keep women from traveling out of their states for abortions.

On May 9, Jones posted a nine-second Tik Tok from the account Haus of Petty (@musclesandnursing) with the message “It’s going to be a damn civil war.” Two images circulated in the video over dance music.

The first was a Politico headline from March 19: “Missouri wants to stop out-of-state abortions. Other states could follow,” next to a picture of Missouri state Rep. Mary Elizabeth Coleman.

The second was a tweet from Paul Cogan from Toronto (no blue check), who imagined the worst (emphasis on imagined): “Just Another WTF…In order to prevent women from leaving the state for an abortion, Republican states will soon pass laws that women cannot leave their state unless they submit a negative pregnancy test.”

The important note here: Nowhere in the Politico piece is there any mention of a pregnancy-test requirement.

But who needs facts? Over that TikTok imagery came the Leslie Jones Twitter meltdown. ”Soooo how the f--k will this work. Will they ask while booking ticket? Or when boarding plane?! So any woman leaving town got to show this? ARE WE F--KING WAR PRISONERS NOW WTAF?! Seriously THIS IS SOME HANDMAIDS S--T!! What are we gonna do?! We can’t let our freedom be attacked!”

Soooo how the fuck will this work. Will they ask while booking ticket? Or when boarding plane?! So any woman leaving town got to show this? ARE WE FUCKING WAR PRISONERS NOW WTAF?! Seriously THIS IS SOME HANDMAIDS SHIT!! What are we gonna do?! We can’t let our freedom be attacked! pic.twitter.com/95aNtHupkC

People see this and honestly wonder if some Republican politician somewhere actually proposed a bill requiring women to take a pregnancy test for interstate travel. That’s the confusion Jones unleashed. No “independent fact checkers” will get involved. Do they want to tell the Prominent Woman of Color she’s spreading misinformation.

In a 2019 bit on “Weekend Update,” Jones put on the typical "Handmaid's Tale" outfit and claimed anti-abortion laws were a “war on women.” But PolitiFact hasn’t touched her. Last year, Snopes.com rushed to correct the claim that Jones had married fellow cast member Kate McKinnon.

In the actual Politico story on Missouri, it reported state Rep. Coleman is proposing a bill to let private citizens sue people who transport Missouri women across state lines for an abortion, adding “it specifically targets a Planned Parenthood clinic in Illinois just across the river from St. Louis that opened in 2019 with the explicit goal of serving Missouri patients.”

Chicago Mayor Lori Lightfoot recently proclaimed her plan to dedicate $500,000 to pay for out-of-state abortions, declaring Chicago an "island of reproductive freedom."  These developments will spur a whole new round of court cases, and become campaign fodder for Republicans and Democrats.

But all of this is made exponentially dumber by vulgar comedians on the rampage. Leslie Jones wouldn’t expect Mitch McConnell to be a great standup comedian, so maybe she should pass on playing Maxine Waters on the internet. With all of the people who are unfortunate enough to take her seriously, maybe she could actually read something before tweeting everyone else into a dystopian panic.