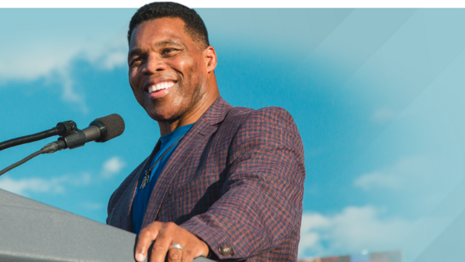 Sunday’s Washington Post Magazine carried an article on black conservative Herschel Walker’s campaign for Senate, and you could tell it would accentuate the negative. It was headlined:

For this Trump-endorsed candidate, does a troubled past even matter?

In paragraph #4, freelancer John Rosengren reveals he’s not stalking the former star running back for a puff piece:

I’m here, in part, because I want to see for myself if Walker’s campaign in Georgia reflects the nation’s new norm in post-Trumpian politics. Can enough celebrity sparkle and Trump rhetoric, coupled with some distortion of facts and often a general indifference to the particular needs of constituents, truly be the reality in GOP politics?

The quotes Rosengren uses are overwhelmingly negative, from furious liberals and from local Republican skeptics.

So is Trump exploiting Walker to slake his personal vendetta? “[Walker] has positioned himself into being a useful fool for those who don’t have the best interests of Black people or this democracy at heart,” says Harry Edwards, a sports sociologist, civil rights activist and professor emeritus at the University of California at Berkeley....

Walker’s refusal to use his national platform to advocate on their behalf alienated him from some of his Black neighbors, which he resented. “I never really liked the idea that I was to represent my people,” he writes in [his memoir] Breaking Free.

That stance — especially now, coming from a Senate candidate — has drawn sharp criticism from Black leaders. “Herschel Walker won’t advocate for anybody, only for what’s in his best interest,” Harry Edwards says. “He’s irrelevant to the Black community, and we should treat him as such.” A representative from Walker’s campaign declined to address the comments.

… “This is a person who has run away from issues of race and has not dealt with them,” says Kevin Harris, former executive director of the Congressional Black Caucus. “If you are Herschel Walker and don’t understand how the racists are using you to give cover to their racism, then you are not qualified to serve in the U.S. Senate at this time."

Rosengren highlights how Walker isn't always up to speed on policy or politics, such as referring to late congressman John Lewis as a Senator:

Walker’s flagrant display of ignorance rankled many, including Cliff Albright, co-founder of Black Voters Matter Fund, intended to mobilize and empower Black voters. “There’s no crime in being ignorant,” Albright says, “but there is in not knowing you’re ignorant and going around boasting about what you don’t know. He’s a clear and present danger to our health and democracy.”

Online, the Post blew up the bold part of this quote into large letters!

Walker's not always wrong, but the liberals pretend he is:

But Walker might be impossible to ignore, calling the leaders of Black Lives Matter “trained Marxists” who don’t believe in American values, mocking the defund police movement as the brainchild of a drunk and testifying at a congressional hearing in 2021 against reparations for slavery.

Ahem the BLM leaders have said publicly they're Marxists.

Rosengren dove deeply into Walker's memoir where he talked of playing Russian roulette and thought about shooting a man who was late in delivering a car he ordered, as well as how officials granted a restraining order after his ex-wife said he threatened to kill her. That's some serious stuff. But you can be sure the Post wasn't digging into allegations from his opponent Sen. Raphael Warnock's ex-wife who claimed he ran over her foot. All in all, it was just another activist Sunday for a Democrat paper.