President Biden can say the craziest things and we know that the liberal “fact checkers” are very likely to look the other way.

Some of these fact-mangling gaffes might be called “senior moments.” At a Lockheed Martin plant in Alabama on May 3, Biden suggested we were sending missiles to Russia. “Before Russia attacked, we made sure Russia had Javelins and other weapons to strengthen their defenses so Ukraine was ready for whatever happened,” Biden said midway through his speech.

Minutes later, Biden said “Just a few days ago, the Wall Street Journal quoted a young Hungarian fighter saying, ‘Without the Javelins, it would have been very hard to stop the enemy pushing ahead.'” It was a Ukrainian fighter. 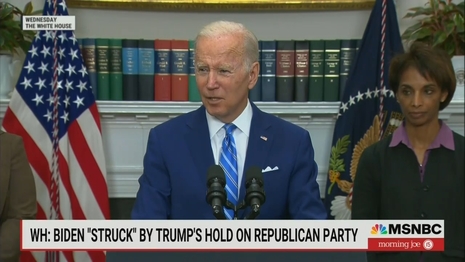 Then there are times when Biden says something vicious. “This MAGA crowd is really the most extreme political organization that has existed in American history,” he said in reference to abortion at the White House on May 4.  Reporter Sebastian Smith suggested to Jen Psaki this “MAGA crowd” could be understood as roughly half the voters in the last presidential election.

So are Trump voters more extreme than the KKK, the neo-Nazis, the Communist Party USA? Are they more extreme than homegrown members of ISIS? The media didn’t treat this as vicious or bizarre. They reported this blather as gutsy and blunt.

ABC’s Terry Moran narrated: “Biden says that the followers of former President Donald Trump will push Republicans to go further, using some of the toughest political language of his presidency.” CBS’s Ed O’Keefe merely said “President Biden is now warning of what could come.” NBC’s Peter Alexander touted Biden “warning the conservative court could unravel other privacy rights, like same-sex marriage and contraception.”

In the same mud puddle of remarks, Biden uncorked his wildest imagination: “What happens if you have states change the laws saying that children who are LGBTQ can’t be in classrooms with other children? Is that legit under the way that the decision is written?” Now the Republicans want to segregate the children by “sexual orientation”? Fact check: Pants On Fire.

Terry Moran ran that quote, too, treating it as normal remarks instead of QAnon-level conspiracy theory. “President Biden, echoing legal scholars on the left, is warning that the leaked Supreme Court draft opinion that would overturn Roe vs. Wade could be just the beginning of the rollback of rights.”

When Fox’s Peter Doocy asked Jen Psaki what on Earth the president meant, she said “we’ve seen extreme laws that target LGBTQ families, their kids across the country. And I think what he’s saying is: We don’t know what they’re capable of, given what they’ve already done to date.”

Translation: Democrats can make the most preposterous predictions of what Republicans will do, and the liberal reporters and “fact checkers” yawn. They'd rather play defense for Democrats.

Studies have shown PolitiFact has checked Biden's critics almost six times as often as they fact-check the president.  People who object to this tilt aren't hostile to "facts." Instead, they are hostile to the incessant liberal target selection.